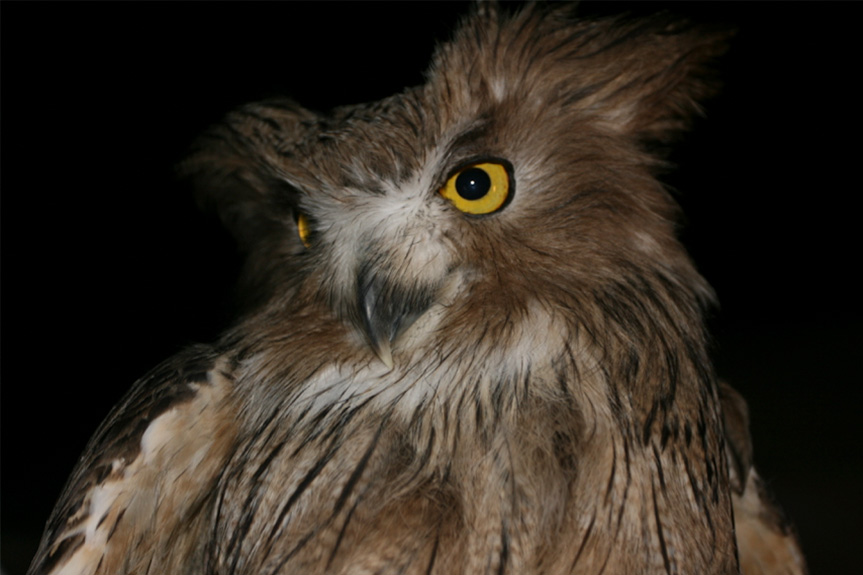 Blakiston’s fish owl (Bubo blakistoni) is a species sitting within the Bubo genus and is listed as Endangered by the IUCN. Initially placed within the Ketupa genus, the fish owl was moved to Bubo as this classification is more applicable to owls with ear tufts like the Great Horned Owl (Bubo virginians), and now contains about a dozen species.

It is the largest living species of owl thanks to its average measurements – weight, length and wingspan – sitting above those of its competitors. Females can be 25% larger than males, weighing from 2.95kg to 4.6kg compared to a maximum known of 3.6kg for males. Wingspan has been measured at two metres, and length can often extend to just over 70cm. Despite these powerful wings, the birds are known to spend much of their time on land, with talon prints visible alongside rivers and streams.

The fish owl usually lives in dense, old-growth forests, and although populations are sparse there are actually a number of groups spread across multiple countries. As such, vocalisation can differ depending on where you find yourself. Single birds across their range make a SHOO-boo sound, but when pairs vocalise together it becomes a duet. The subspecies in the Hokkaido region of Japan coordinates a two-part male call echoed by a singular note by the female. On the mainland, the duet is usually a four-part communique involving a classic HOO-hoo, HOOO-hoooo sound.

Fish owls hunt at night throughout the year, but during brood season have been known to hunt during the day and at dusk. As the name suggests, the majority of the prey is fish. This includes Amur pike (Esox reichertii), salmon (Oncorhynchus masou), catfish (Clarias agboyiensis) and trout (Salvelinus namaycush). They also catch frogs when available, and in winter have been known to take some small mammals like hares (Genus: Lepus) and martens (Genus: Martes). Prey is taken in-flight or by pouncing from the banks or in water.

Living in old-growth forests alongside rivers, these owls face dangers ranging from deforestation, collisions with cars, and human hunting.

The owl is a species unusual in its enduring ability to impress upon cultures across the globe. Be it a symbol of wisdom, of beauty or of stealth, this bird of prey has played a part in the folklore and lessons of countless societies. And so it is with sadness – and indeed hope – with which we confront the truth of our impact on the bird itself.

Blakiston’s fish owl (Bubo blakistoni) is one species of the owl family that is facing a battle for survival as a result of human activity. Endangered and entrenched in the vast wilderness that is the Russian Far East, this giant represents a struggle many animals in the area face. The destruction of old growth forests in which the bird lives and nests is a major issue, as is the building of roads and an increased human presence.

“That’s what’s beautiful about the road closure work — we can protect so many species with one single, relatively simple action.”

Jonathan Slaght knows better than most what’s at stake, and outlines a key manner in which these issues are being addressed.

“The riparian forests used by fish owls in the southern Russian Far East are also used by wild boar, red deer, sika deer, and roe deer,” he explains. “In turn, concentrations of these ungulates attract Amur tigers. That’s what beautiful about the road closure work — we can protect so many species with one single, relatively simple action.”

Slaght is the Russia and Northeast Asia Coordinator for the Wildlife Conservation Society (WCS) and, along with Russian ornithologist Sergei Surmach, founded the Blakiston’s Fish Owl Project. Working in situ, he tackles daily issues confronting the fish owl in the region as well as undertaking longer-term research projects. The aim of these is improving the standing of the creatures in what is a continual arm-wrestle between corporate interests, economic needs and traditional local practices.

Sitting at 60-70cm in height, the fish owl has captivated Slaght for well over a decade, and he’s just as passionate as when he started. He outlined for us what it takes on a daily basis to manage the role he does.

“I spend a tremendous amount of time searching for funding, applying for funding, analysing data for reports, and writing reports,” he said. Indeed, at the time of this interview, he had 13 proposals and reports due in the next week alone.

“Then,” he continues, “a glorious two to three months out of the year, I’m in the forest, breathing the crisp air, furthering my fish owl and road closure research.”

Having worked with the species for such an extended period, Slaght has had perhaps unrivalled access to see changes in the fish owl’s interactions with humans.

“I have not seen much change in how fish owls respond to humans,” he says. “Fish owls have always been very, very wary of humans. This goes back to the first records I am aware of in Russia, with ornithologists in the early-to-mid twentieth century complaining about how hard it is to get close to a fish owl.

Declines in Russia, China and Japan

The species continues to decline in Russia, China and Japan’s Hokkaido area, and it’s thought to number just a few thousand globally. There are a variety of reasons for this decline, as Slaght outlines.

“As the forest roads get better, cars are going faster and more owls are being killed in vehicular strikes,” he says, adding that this is a particularly major issue in the island subspecies found in Japan. But logging of old growth forests remains the primary cause of endangerment for the species.

In many areas of the world major logging companies are responsible for mass clearing of forests that are home to countless species, but in the case of Blakiston’s fish owl, it is illegal logging that creates a wider issue. Slaght uses the case of 1990s North America as a comparison, where companies were in constant battle with Slaght’s counterparts.

“The fundamental difference is that spotted owls in North America sometimes nest in commercially-valuable redwoods that might range in value from $25,000 to $75,000, whereas fish owls nest in rotting poplars with no commercial value,” he explains. “It’s a lot easier to work with logging companies on natural resource management when numbers that staggering are not part of the equation.”

Work with local logging company TerneyLes has, thus far, been promising, but it is only natural that such relationships will incite concerns that PR stunts override actual commitment to progress. Slaght’s answer when this is posed to him is reassuring.

“TerneyLes looks at this as ‘biodiversity preservation’ – they are not necessarily looking at our partnership through the lens of any specific species – but I think they are serious about it.

“By working with us to limit human access to old forest roads,” he continues, “TerneyLes is protecting their forest inventory from illegal logging and from the potential of catastrophic fire (caused perhaps by an untended campfire). That road closures also benefit endangered species like fish owls and Amur tigers just means we have a common threat to address.”

An issue at the forefront of conservation for a lot of species is that of climate change, but Slaght suggests that, so far, this has not played a part in the predicament the world’s largest owl finds itself in.

“I’ve noticed no differences,” he says, referring to climate change affecting the birds’ activity, though he does caution this could change.

“Fish owls seem to rely heavily on frogs as a food source in spring (to feed themselves and their growing chicks), so if climate change shifts frog breeding cycles, that might negatively impact fish owl fledging success.”

So Slaght, Surmach and Co’s work remains focused on working with logging companies to engage in conservation practices, and thus far this has seen a fair measure of success.

“We’ve had some really good luck with getting our conservation recommendations enacted. First, via WCS road closure work with TerneyLes, and secondly by working with WWF to enact establishment of ‘micro-protected areas’ within TerneyLes’s logging concessions across the region.”

Perhaps because no one outside the field ever hears much about this species, or maybe because he really is that knowledgeable, Jonathan Slaght has become an unintended face of Blakiston’s fish owl conservation for anyone Googling this bird. It’s a role he may never have intended to create for himself, but it is certainly one that is needed – not just for this owl but for the vast number of endangered animals out there.

For more information, you can check out the dedicated Blakiston’s fish owl conservation site via this link.