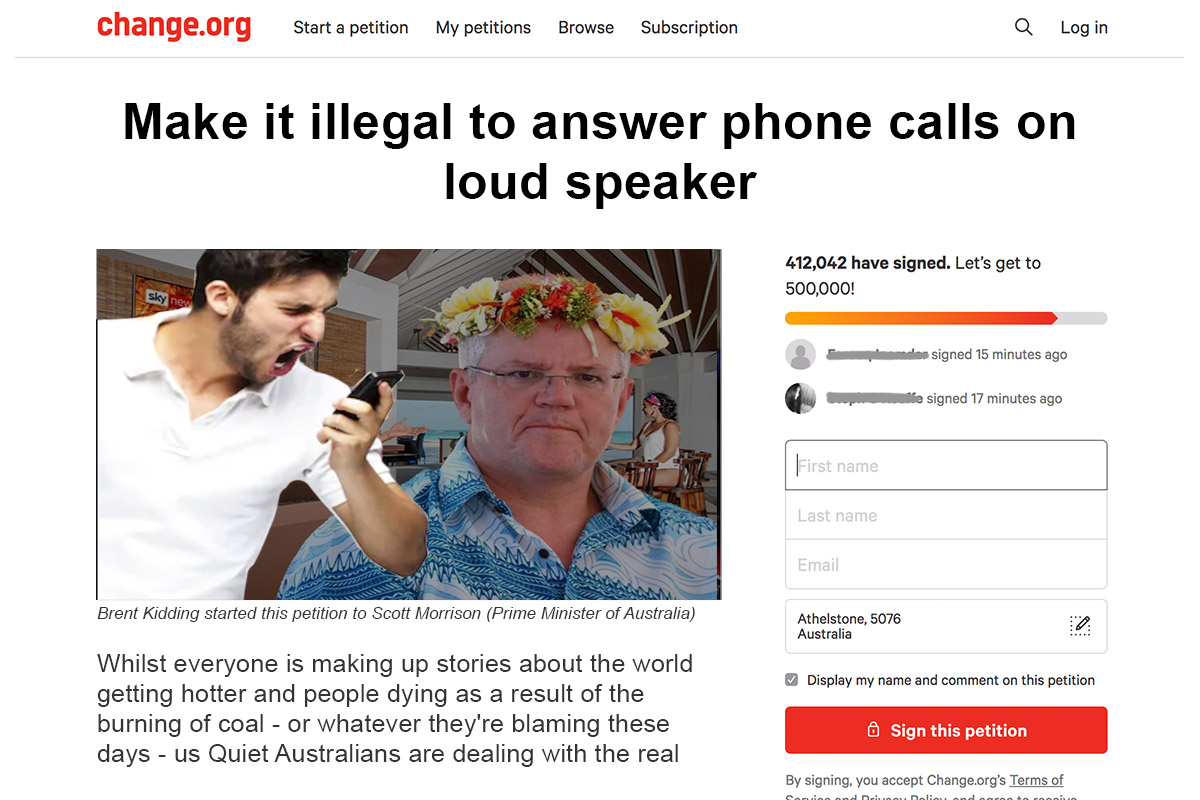 With record-breaking fires in a number of States around Australia, and the discussion around the impact of the Climate Crisis growing louder at the hands of out of touch city-lefties, Prime Minister Scott Morrison has pointed out that Quiet Australians have real issues to contend with.

We found one of those Quiet Australians and managed to get them to open up on the problems that they face that present a far bigger existential threat than the coming collapse of modern society as a result of anthropogenic activities.

“Yeah, there’s a lot of coverage about this so-called global warming – or whatever they’re saying now – but meanwhile I have to put up with my mates answering their phone on loud speaker and not telling me that other people are in the room,” says 38-year old Brent Kidding from east-Western Australia.

Kidding says that with a small bunch of people hogging the press to talk about the environment, he’s given up hoping the Government will do something about what he and the other Quiet Australians are up against.

“Obviously like I understand: ScoMo needs to keep focussed on the Religious Discrimination Bill and his holiday to Hawaii to make sure he doesn’t answer questions about climate change,” says Kidding, making the imaginary quote marks with his fingers whilst saying ‘climate change’.

“But it means it’s up to people like me to confront the major issues. So I’ve started an online petition to get loud speakers on phones outlawed.”

Kidding then whipped out his Google Pixel 1 that he got from a mate and showed me the Change.org petition. It is titled “Make it illegal to answer phone calls on loud speaker”, and for the summary caption he has written:

“Whilst everyone is making up stories about the world getting hotter and people dying as a result of the burning of coal – or whatever they’re blaming these days – us Quiet Australians are dealing with the real issues. Sign this petition to make it illegal for your mates to answer the phone on loud speaker when you don’t know who else is in the room and you can’t hear them properly anyway.”

When I asked Kidding to explain where all this has come from, he said:

“Well the other day I called my brother and he passed the phone to our mate who was in the room and put the call on loud speaker. First of all, I couldn’t understand what anyone was saying because all these voices are just shouting at me, but I also didn’t know who else was there.

“Like a few days before that, I called my mate who answered on loud speaker but didn’t tell me his girlfriend was in the car. Like, what the bejeezus? I could’ve said anything.”

Conjour did contact Kidding’s brother and friend for corroboration of the story, but when we called we couldn’t understand what they were saying as it was via loud speaker. Maybe he has a point.

Meanwhile, the Country continues to burn, with countless homes, human lives and wildlife lost because of Climate Change-worsened fires, whilst absent, elected Ministers use the dollars they (allegedly) receive outside parliament from coal lobbyists to jet off with family to tropical islands.