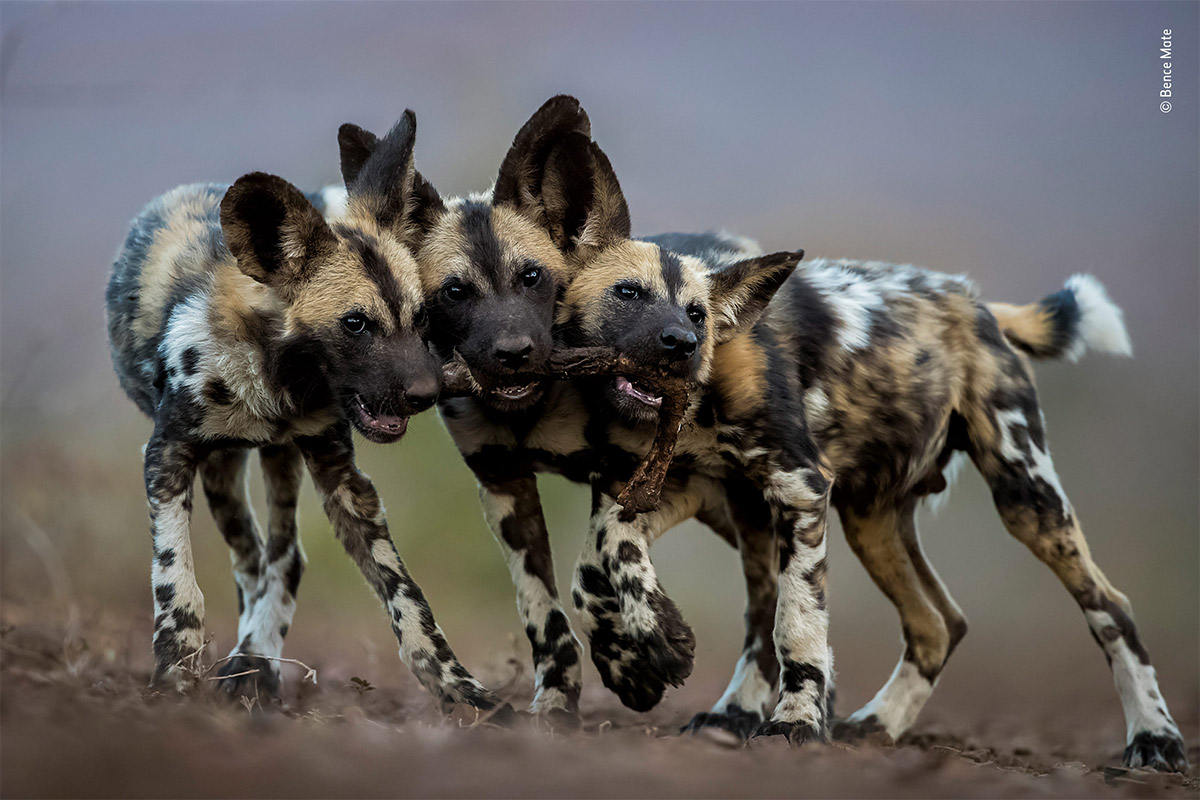 One Toy, Three Dogs by Bence Mate, Hungary: While adult African wild dogs are merciless killers, their pups are extremely cute and play all day long. Bence photographed these brothers in Mkuze, South Africa – they all wanted to play with the leg of an impala and were trying to drag it in three different directions!

A heart-warming image depicting a unique moment between a pair of male lions is the winner of the Wildlife Photographer of the Year LUMIX People’s Choice Award. 16,000 nature fans voted, and London-based photographer David Lloyd’s picture, Bond of Brothers, emerged as the favourite.

Wildlife Photographer of the Year is the Natural History Museum’s annual showcase of the world’s best nature photography and photojournalism. Seen by millions of people all over the world, the images celebrate the astonishing diversity of life on earth, whilst challenging us to address the big questions facing our planet.

The fifty-fifth competition is currently being judged by an esteemed panel of experts, and the winners will be revealed in October 2019. Bond of Brothers by David Lloyd, New Zealand / UK: These two adult males, probably brothers, greeted and rubbed faces for 30 seconds before settling down. Most people never have the opportunity to witness such animal sentience, and David was honoured to have experienced and captured such a moment. The picture was taken in Ndutu, Serengeti, Tanzania.

The two adult males, likely to be brothers, greeted and rubbed faces for around 30 seconds before settling down. It is unusual for lions to nuzzle for so long, and David was honoured to have experienced and captured such a moment.

David says, ‘I’m so pleased that this image did well because it illustrates the emotion and feeling of animals and emphasises that this is not limited to humans. It is something I think more people need to be aware of for the sake of all animals.’

Director of the Natural History Museum, Sir Michael Dixon, says, ‘Lions are individuals with complex social bonds, and David’s winning picture provides a glimpse into their inner world. A truly stunning photograph, this intimate portrait reminds us that humans aren’t the only sentient beings on this planet. I hope the empathy and wonder garnered by this image will inspire more people to become advocates for nature.’

Four ‘Highly Commended’ images won over the hearts of the public, making it into the top five. These include Matthew Maran’s timely shot of a fox walking towards graffiti art in London, and Justin Hofman’s heart-breaking image of a famished polar bear in the Canadian Arctic. Fox Meets Fox by Matthew Maran, UK: Matthew has been photographing foxes close to his home in north London for over a year and ever since spotting this street art had dreamt of capturing this image. After countless hours and many failed attempts his persistence paid off.

Hungarian photographer Bence Máté also features with a picture of three painted wolves playing with the leg of an impala, and Wim Van Den Heever with a sublime shot of three king penguins on a beach in the Falkland Islands. Three Kings by Wim Van Den Heever, South Africa: Wim came across these king penguins on a beach in the Falkland Islands just as the sun was rising. They were caught up in a fascinating mating behaviour – the two males were constantly moving around the female using their flippers to fend the other off. One Toy, Three Dogs by Bence Mate, Hungary: While adult African wild dogs are merciless killers, their pups are extremely cute and play all day long. Bence photographed these brothers in Mkuze, South Africa – they all wanted to play with the leg of an impala and were trying to drag it in three different directions!

What is the Natural History Museum?

The Natural History Museum exists to inspire a love of the natural world and unlock answers to the big issues facing humanity and the planet.

It is a world-leading science research centre, and through its unique collection and unrivalled expertise it is tackling issues such as food security, eradicating diseases and managing resource scarcity.

Children marched and the World shook