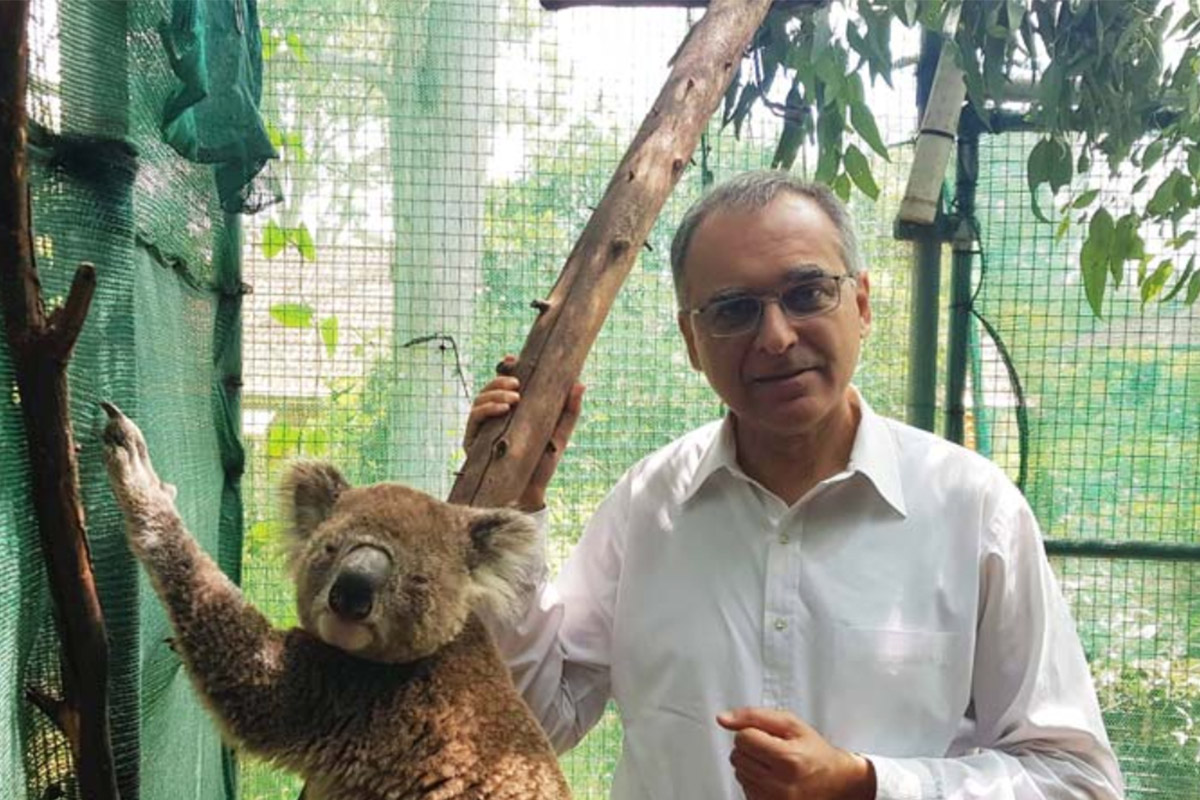 Pavan Sukhdev, President of WWF-International with Billy, a koala in care. Image by: WWF-Aus / Madeleine Smitham

Originally published as “An open letter to the Prime Minister and other political leaders” on WWF News.

The President of WWF-International has penned an open letter to the Prime Minister of Australia and other political leaders, outlining the dire situation the country’s ecosystems and vulnerable species find themselves in:

I have been a landowner near Malanda in North Queensland for 18 years, where I have gradually restored rainforest on my property to provide habitat for Cassowary and Lumholtz’s Tree-kangaroo, and to improve the health of the Ithaca River (part of the Barron River Catchment) that borders my property.

I am now visiting Australia as President of WWF International to see first-hand the plight of the nation’s forests and koalas following the findings of WWF’s Living Planet Report in October last year.

This report also found on average wild animals around the world have declined by 13.6% per decade. Yet the situation in Australia is worse – with the country’s most iconic animal, the koala, declining by an alarming 21% per decade.

In my discussions with scientists and experts, the widespread assessment is that Australia’s deforestation is worsening.

On behalf of the World Wide Fund for Nature’s 5 million supporters, I urge the Australian and New South Wales Governments to commit to urgent and effective action to halt this rate of deforestation.

We have found a direct correlation between the bulldozing of forests and bushland, and the rapid decline of koalas – which are listed as vulnerable to extinction.

We have most concern for the koala population in New South Wales, following the 2017 repeal of the Native Vegetation Act. The repeal puts seven million hectares of koala habitat at risk of tree clearing.

Available scientific and government sources indicate that koalas are on track to become extinct in New South Wales by as early as 2050, and tree clearing is the major driver.

The population of koalas in the state declined by 33% over a 20-year period and is now estimated to number perhaps only 20,000, a decline from an historic estimated population in the millions.

Since the repeal, our analysis of satellite imagery shows that the rate of tree clearing has increased by as much as 300% in parts of NSW.

The data shows that current activities aimed at halting the rapid decline of koala populations – such as the purchasing of land for new national parks and planting new trees – will not stop their projected extinction across New South Wales if habitat destruction continues at this pace.

The international community is closely watching Australia’s response to the plight of the koala.

The demise of orangutans has come to represent the destruction of rainforests in Borneo and Sumatra. People around the world are drawing parallels to the koala, which is also heading towards extinction because of rampant deforestation.

I call on the Australian and New South Wales Governments to act immediately to pass legislation that halts this rate of tree clearing and protects the homes of koalas and other animals. This is imperative to prevent the extinction of the koala in New South Wales.

To support the critical work of WWF Australia, visit their website and consider donating.