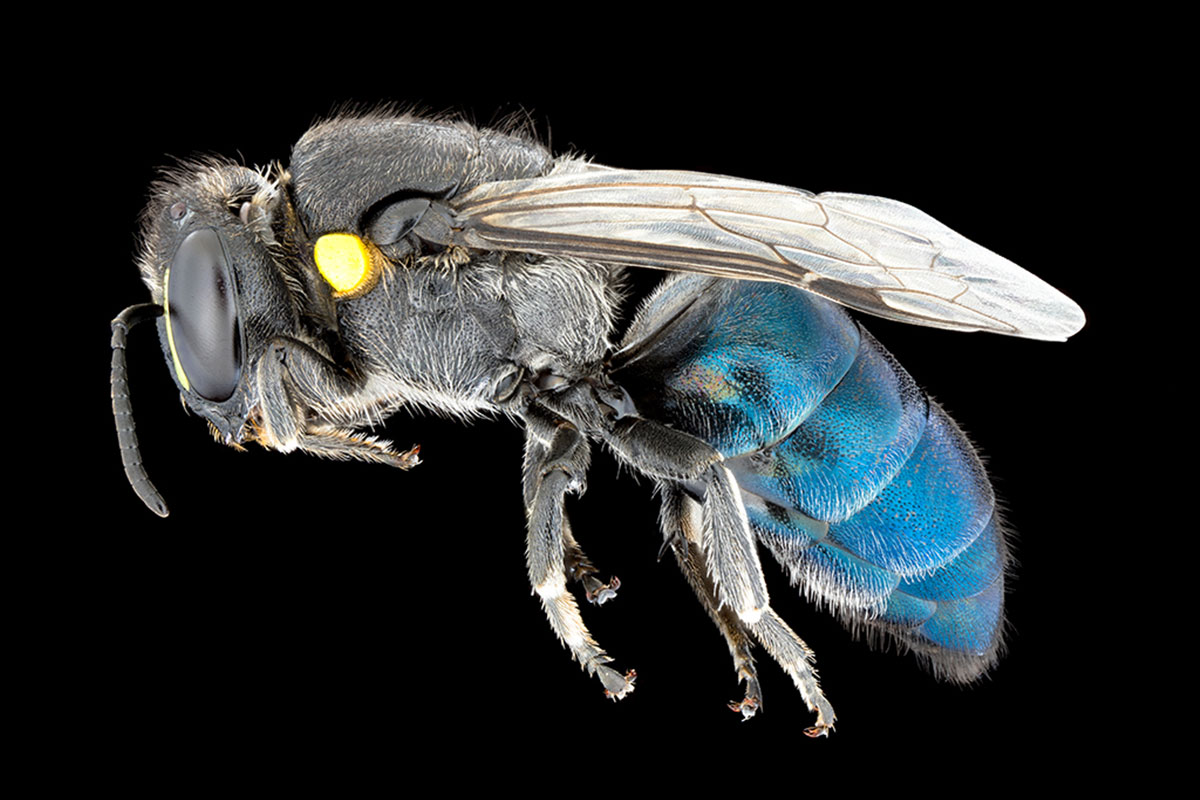 Pollinators, as many of you will know, are under threat. From habitat destruction to chemical warfare, we are watching species (and in context of this review, bees) veer towards extinction at a disquieting rate. Despite this, the magical world of native bees has been a sphere of beauty long ignored by Australians.

If James Dorey and CSIRO have their way, that is not to bee (I’m sorry) the case for much longer.

“There are over 1600 described and named bee species in Australia alone, with estimates suggesting a total of 2000 to 3000,” writes Dorey in his introduction. This tidbit of information sets the scene for what is a truly memorable piece of work. Lipotriches (Austronomia) australica, female (SA): This pretty bee is about the same size as the European honeybee, but is a buzz pollinator, using its abdomen to vibrate and dislodge pollen. Photo by James Dorey

As with many books of this model, I tend to pick them up and flick to a page of fancy to marvel at the photos and see what’s in store. However, it is worth taking your time to turn to the first page and start from scratch. For this publication is far more than an ode to macrophotography (though it is certainly that).

A foreword and introduction that remind you of just how fragile the pollinator biome is lead into page after page of splendid bee imagery. The book is divided into species by states, beginning with NSW, and this will make it easy for any local readers who wish to delve straight into their home region.

But in amongst the photos are a number of one or two page pieces of prose that drive home the message that the book is laying clear: If changes are not made to how we interact with bees, there is a lot more at stake than just that particular animal. Hylaeus (Macrohylaeus) alcyoneus, female (NSW): The banksia bee is named such because it likes to feed off of Banskia plants, which is no surprise. What is interesting, however is that males will guard flowers, chasing off other male banksia bees in order to mate with the females who come in for a feed. Photo by James Dorey Ctenocolletes smaragdinus, female (WA): If you are lucky, you might see one of these gorgeous bees flying around in Western Australia. It is part of a bee family found only in Australia, the Stenotritidae. Photo by James Dorey

It begins with ‘Threats to our bees’, outlining the aforementioned dangers along with climate change and others: “Bees are the most important group of insects on the planet” is the beginning of this section, and it brings to mind the haunting theory known as the Windshield Phenomenon.

After a flurry of stunning photos, the next pointed piece is ‘Social behaviour of bees’ which takes more of an educational vantage and is littered with points of interest: “In the case of solitary bee species, an adult female working alone finds a site and constructs her nest,” and it goes on.

The reader is then taunted with ‘How to find native bees’ which, trust me, after flicking through this book, is a page you’ll turn back to.

Finally, the all-important ‘How to attract native bees to your garden’ which, as is outlined throughout these pages, may be a critical part of saving bees worldwide. Paracolletes (Paracolletes) crassipes, female (NSW): These large bees might be mistaken for a European honeybee because they are similar in size and very fluffy, but they are indeed natives. They will often visit native garden plants such as lemon myrtles and melaleucas. Photo by James Dorey Amegilla (Notomegilla) chlorocyanea, male (WA): One of the most-recognised of our native bees are the incredibly fast-flying and stunning blue-banded bees. Representatives of these species can be found around Australia in gardens and the bush. Photo by James Dorey

There are many books, particularly in this field of conservation and wildlife photography, that almost flatter to deceive. By that I mean that behind the admittedly beautiful photography, there seems a rushed nature to the print, where the purpose was forgotten for the gloss.

In Bees of Australia, Dorey has avoided this fate. It is a truly eye-opening piece of work, and one that I have found so inspiring as to kickstart a new section of Conjour’s reporting.

This review of CSIRO’s beautiful publication will be the first article in a new, dedicated category on this website: Pollinators. We could give no greater testament to the impact of this book.

Save, perhaps, the knowledge that I have been trying to work out how to build an insect home ever since I finished reading it. Brachyhesma houstoni, female (SA): Named after Dr Terry Houston, who collected the original specimens in 1964, this bee can be found in South Australia and the south-west of Western Australia. Photo by James Dorey Amphylaeus morosus, female (VIC): Amphylaeus morosus is the only bee in its entire family (Collitidae) that is known to be social. For such a large family of bees this is truly remarkable! Photo by James Dorey

“Yet, few people appreciate the true variety and biological diversity of bees demonstrated so vividly in this book.” – T R New, Foreword

“The bottom right corner of each species spread includes a to-scale silhouette of each sex or caste shown, giving a visual indication of how big – or small – each bee is.”

“Crop pollination by the European honeybee alone has a commercial value of A$4-6 billion in Australia and A$240 billion worldwide, with 35% of the food that we produce and 75% of our food crops being reliant in some way on animal pollination.”

“One way to explain how important bees are in the natural world would be to imagine what might happen if they were to disappear tomorrow. Direct effects of pollinator loss or decline would result in the loss of pollination services for the plants in that ecosystem.”

“Any pollinator species that is lost or whose population declines could be another chink in the armour that nature’s diversity and redundancy provides. Every chink could bring about unforeseen effects that might be another step towards to end of a population, a species, a crop or an ecosystem. Awareness and knowledge of the important of bee diversity to humanity and the natural world is essential to the conservation of bees worldwide.”

You can purchase Bees of Australia direct from CSIRO Publishing via this link.