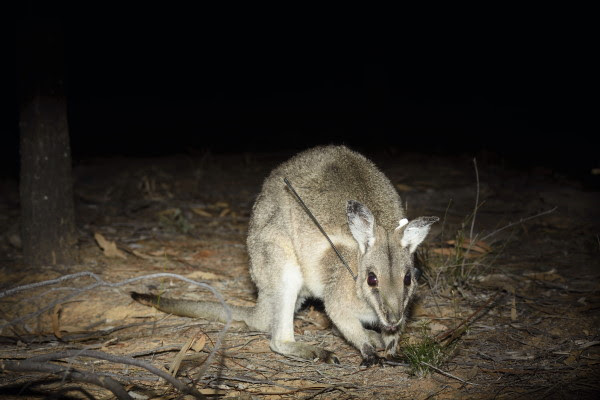 Australian Wildlife Conservancy has announced yet another exciting reintroduction. Image by AWC.

To kick off Biodiversity Month in Australia, the Australian Wildlife Conservancy (AWC) has announced an exciting reintroduction to a NSW national park: the Bridled nailtail wallaby.

In collaboration with the NSW and Queensland governments, AWC has successfully released this rare Australian mammal, which was previously thought to be extinct.

Thirty-three Bridled Nailtail Wallabies, including eight pouch young, were released into a purpose-built feral predator-free area in the Pilliga as part of the NSW Government’s 10-year Saving our Species program.

The endangered mammals were trapped and flown to NSW from Queensland’s Taunton National Park – the site where the Bridled nailtail wallabies were rediscovered after being thought to be extinct for more than 40 years.

The Bridled Nailtail Wallabies are the second regionally extinct mammal species to be restored to the Pilliga. Bilbies were the first to be returned here last December. The return of two native mammals to the public estate is a significant step forward and highlights our ability to work in collaboration with our partners to turn back the tide of extinctions in Australia. Although Bridled Nailtail Wallaby populations were once abundant across much of eastern Australia, the introduction of feral cats and foxes saw their numbers plummet towards extinction. By the 1930s, the wallaby was thought to be lost forever, with the last animal recorded in 1937. Incredibly, in 1973 a fencing contractor in south-west Queensland spotted the mammal, which matched the description given in a feature story in a Women’s Day magazine. The area was subsequently declared Taunton National Park.

Related Topics:AustraliaAWCfeaturedRewildingrewilding australia
Up Next

You’re on a plane, and spiders are part of the engine.