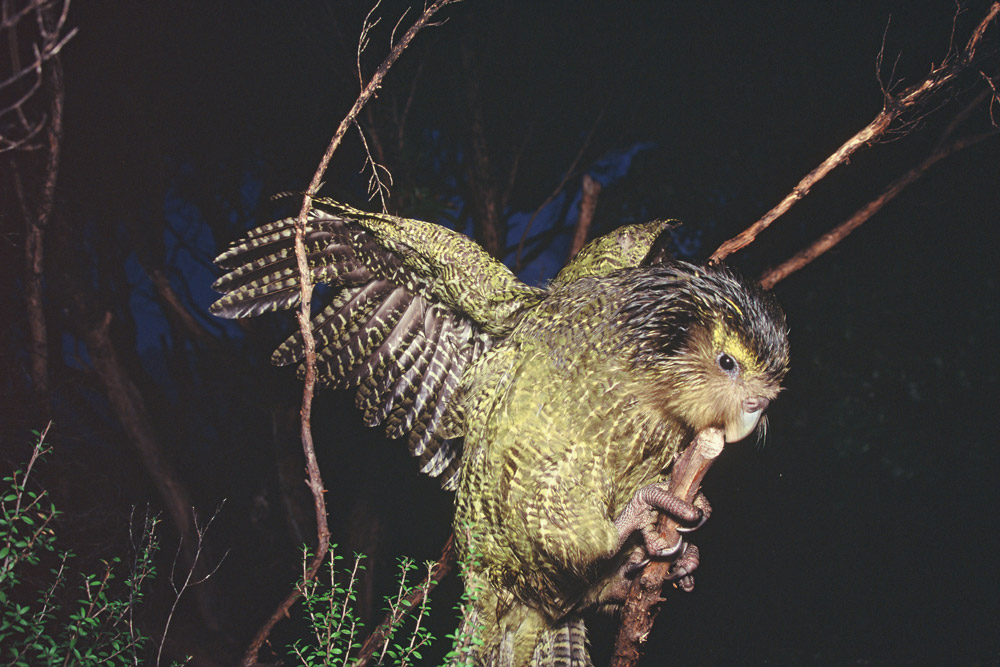 Populations of New Zealand’s endemic parrot species, kakapo (Strigops habroptilus), once spread broadly over the three main islands of the continent. Since human arrival, numbers of the nocturnal, mottled-green bird have been on a steady decline. Now, with 155 individuals left, they call two small islands just off the southwestern side of the country home.

At first glance, light brown ‘side burns’ framing the parrots face raise questions about its potential relatability to an owl. In reality, the kakapo (meaning ‘night parrot’ in Maori), as with other endemic New Zealand parrots, is a result of adaptive radiation. DNA evidence suggests the kakapo began to diverge from the so-called ‘proto-kaka’ 60-80 million years ago, after the breakup of Gondwanaland saw the country sail eastward.

Previously, kakapo’s only predators were avian; two extant birds of prey (New Zealand falcon [Falco novaeseelandiae] and swamp harrier [Circus approximans) and two now extinct (Haast’s eagle and Eyle’s harrier). Kakapo’s were therefore safest remaining close to the ground, its plumage a perfect camouflage in the New Zealand forest. Eventually, with more time spent on the ground, body size increased and wing muscles decreased, rendering the bird flightless. These adaptations helped the kakapo earn itself two titles; the only flightless species of parrot, and the heaviest of all parrots. Weighing up to four kilograms, it’s no wonder it can no longer fly; a large macaw (genus: Primolius), for example, only gets up to around 1.8kg. Being heavy and restricted to the forest floor, however, allowed for the development of strong, muscular legs aiding in efficient running, climbing, and digging.

Kakapo prefer to remain solitary as they forage in the forest, but are easily located when producing a unique noise to rival that of a pterodactyl. This prehistoric vocalisation is generally referred to as the ‘skraark’ and is utilised as a form of territorial defence and aggression between neighbouring males. While aggression may occur within the species, conservationists find them inquisitive and somewhat interactive with humans, although their distinct sweet, musty odour may keep some people at a distance.

When confronted with danger, the kakapo’s main form of defence is to remain remarkably still. This behavioural trait has likely been upheld from a time when their only predator was avian, but has not proven to be such a successful characteristic when faced with human arrival and other introduced terrestrial marauders. The first New Zealanders hunted kakapo for a variety of reasons; primarily for meat, but their feathers were also used as decorative jewellery and their skin as high-value fashion garments for women. It was since then that numbers began to decline, with later European arrival and introduced mammalian predators also contributing greatly. Currently, kakapo are classified as critically endangered by the IUCN.

Jenny Ricket, acting Senior Ranger of Kakapo Recovery, has been involved in the conservation of the species for four years, predominantly on Whenua Hou (Codfish Island), and her passion for them is clear, referring to them as “charismatic and endearing”. She believes there are many challenges in conserving kakapo, however low genetic diversity is a big one, caused by a drastic bottleneck when the entire population was less than 50 in the 1970s.

“Kakapo were suspected to be extinct until a small population of 14 males was found in Fiordland in the early 1970s. Another population, including females, was then found on Rakiura (Stewart Island) in 1977. Of the Fiordland males only one bird (named Richard Henry) ever bred, resulting in three offspring (Sinbad, Gulliver and Kuia).”

These offspring have been immensely important to the genetic health of the population, and in 2008, an avian fertility expert began assisting the team.

“What was found was that many kakapo have very abnormal sperm with problems such as two heads, two tails, low motility [muscles affecting the gastro system],” noted Ricket. “As an example, [in] this 2016 breeding season across the population, 123 eggs were laid. Of these, 65 (52.8%) were infertile. Add to this the fact that kakapo only breed every 3-7 years, and that their lek mating system naturally means that only a few of the males at each location will attract the females and have the opportunity to mate, this seriously exacerbates these fertility and genetic diversity issues!”

Other than issues on a genetic level, threats that assisted with the initial decline in individual numbers, as with so many other endangered animals, are introduced predators.

“Cats and mustelids (stoats, weasels, ferrets) have no problem taking out adult kakapo, whilst rats will predate their eggs when the female is away feeding at night (the male takes no part in incubating eggs/raising the chicks). Therefore, kakapo can only survive in a predator-free or highly predator-controlled environment,” she said.

The population of kakapo is, to Ricket’s delight, growing, but currently there are no suitable locations to support the rising numbers. There are talks, however, of making Rakiura (Stewart Island) predator-free.

“If this project can gain momentum,” suggested Ricket, “there is the potential to enable kakapo to be returned to the island and their former refuge.

“Kakapo are ridiculously charismatic and endearing, and the team all want to do as much as they possibly can to help save them. However, as the population grows and funding decreases it is challenging that we now find ourselves having to make tough decisions on where the project’s limited funding and resources stretch to. For example, this season we had to make the tough decision to grade the eggs and chicks based on their genetics and sex in order that when we didn’t have the resources to provide 100% for all of them we could prioritise which chicks received attention first.”

Despite these limitations, the kakapo recovery program, commencing in 1989, has seen some remarkable successes. The population has more than doubled, from around 65 individuals to 155 today. Jenny says there are now 57 breeding age females.

“This breeding season (2016), the only female with Fiordland genes (Kuia) mated for the first time and produced two clutches of eggs, all of which were fertile and four of which have survived and fledged to produce one male and three female chicks. This is a fantastic result,” said Ricket.

To get to this level of success, there have been a variety of methods trialled and a lot of learning along the way. These include:

“It has been learnt that if we can adjust the females’ condition via supplementary feeding we can influence whether a female is in the right condition to breed and, if we can keep her weight in a certain range, increase the number of female chicks produced,” Ricket said, adding that, due to the lek breeding system, “more females in the population will increase numbers faster without necessarily compromising their genetic diversity.”

“We are still learning a lot about artificial insemination (AI) with kakapo,” said Ricket, “but the technique has been used successfully to improve chances of fertility (by increasing sperm competition and by giving healthy sperm to a female if she has mated with a male known to be infertile [or who has] uncertain sperm health), and [to] improve the genetic quality of chicks produced. For example, if a female chooses to mate with a male too closely related to her, we can ‘top her up’ with more appropriate genetic material.”

“Kakapo females are remarkably dedicated mothers and accept nest manipulations such as egg and chick swaps. This has become a really important tool,” Ricket noted. “We have learnt that we are better at incubating eggs than kakapo – they sometimes leave them unattended too long, or may accidentally damage them – but kakapo are better at rearing chicks than us.”

Ricket outlined some of the ways the team aid the birds in this task: “Their strong maternal nature means that we can swap chicks around nests and between mothers to enable all mothers to learn how to raise chicks. [For example], if their own were infertile or their own chick dies. [We can also] spread out the load; often there isn’t enough food for mums to raise three chicks so we can foster chicks to mothers whose eggs were infertile. [This] enables us to pull sick chicks into hand-rearing to ensure they get the best chance at survival yet foster a different chick to the mother so she can keep rearing a healthy chick, and use experienced mothers to teach new-born chicks how to feed properly before giving them to a less experienced mother who might not have quite got the hang of feeding a chick properly yet.”

Outside of Kakapo Recovery, there is a lot being done to raise awareness and much-needed funds to assist in conservation of the species.

“Promoting kakapo both nationally and internationally,” Ricket said, “has been and will continue to be critical for the recovery programme in raising awareness and funds to enable the project to continue and improve, and attracting the help of scientists and specialists worldwide.” She added that, “Douglas Adams’ book Last Chance to See put kakapo on the international stage and the programme receives a lot of support from America, Europe and parts of Asia as well as closer to home.

“Nationally, our advocacy [kakapo] Sirocco goes on tour most years to give the public of New Zealand a rare chance to experience kakapo. During breeding seasons, we attempt to give the opportunity for the public to visit any hand-reared chicks we may have. We have a very successful ‘adoption’ program (adoption packs can be sent overseas at no extra charge) and have just entered into a new partnership with Meridian Energy.

“One of our exciting projects this year is the ‘Kakapo 125’ Genome Rescue project. This project has been funded entirely by crowd funding and aims to sequence the genomes of every individual in the population – this will be a world-first as it will mean sequencing the genome of an entire species,” Ricket said. “The information gathered from this project will help us to make more informed management decisions in our attempts to increase the genetic diversity of the population and may help us to learn more about specific health problems which hinder the species.”

Increasing numbers of kakapo is an excellent start in rehabilitating the species, but there are several challenges remaining. Ricket and the team at Kakapo Recovery are dedicated to the species and will do whatever is necessary to ensure a secure population.

“Knowing that the work I do on a day-to-day basis – organising volunteers to feed the birds, treating a sick bird, hand-raising a chick or protecting a nest – is all vital in the success of the species is incredibly rewarding,” Ricket added. “Seeing chicks grow up, become independent and learning to find their own way in the world, or seeing that a juvenile male is learning how to make a bowl and boom to the ladies… it’s tangible and makes me feel very proud of what our team has achieved so far and gives me great hope for the future of the species.”

All images are supplied by Kakapo Recovery.