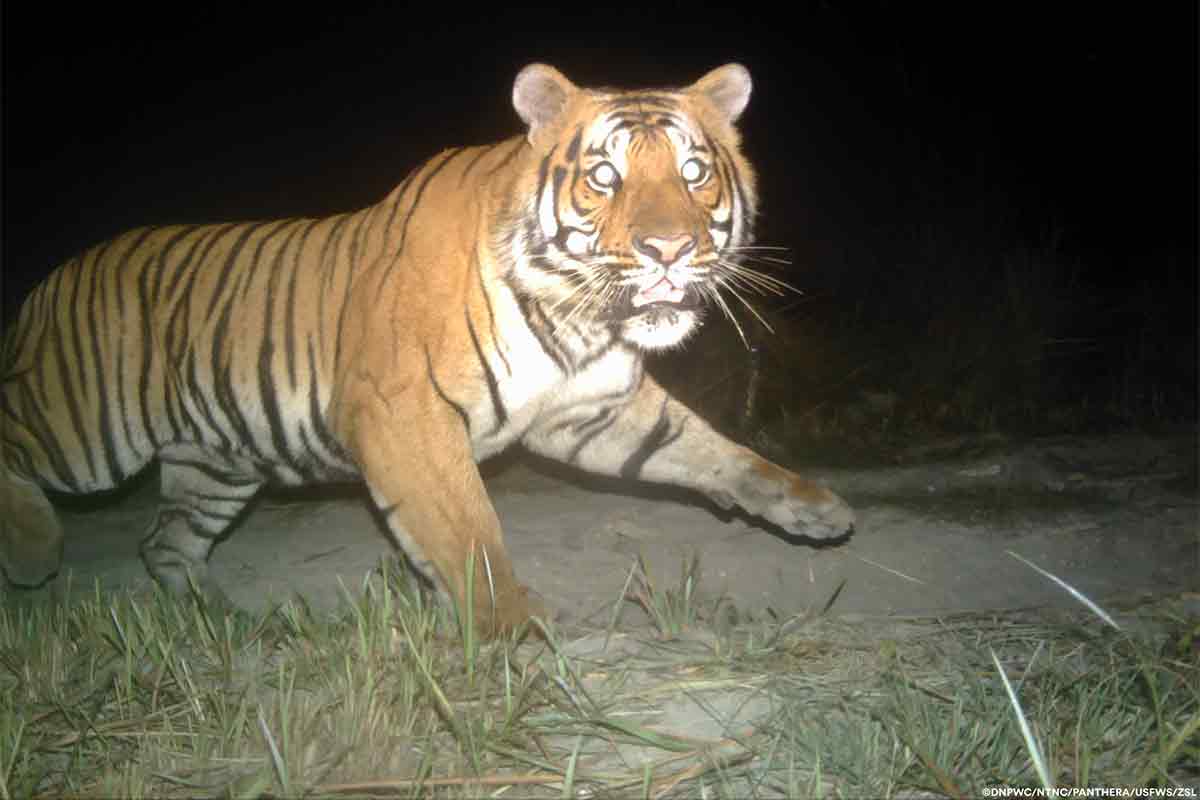 A deadly combination of infatuation with the tiger and innate human selfishness has led the species to the edge of extinction. Stunningly, that same infatuation has mixed with our capacity to right our wrongs, and evidence of this turn around is nowhere clearer perhaps than Nepal.

Today, fewer than 3,900 tigers remain in the wild. Poaching is the greatest threat to the species and Nepal, flanked by China and India, is a dangerous thoroughfare for the illegal wildlife trade. So what’s the good news?

In September, the Nepalese government announced a remarkable increase in the country’s tiger population: 19% growth. This comes off the back of a camera trap study, showing numbers boomed from 198 to 235 estimated individuals in four years.

How’d they do it? After an outstanding rebound of tiger numbers in Nepal’s Parsa National Park in 2016, the latest increase of the nation’s overall tiger population estimate is further proof that the Nepalese government has effectively mastered a recipe for tiger conservation success.

Dogged dedication to the empowerment of law enforcement infantries and a broader justice system combatting poaching, authentic support of local communities and consistent scientific population monitoring have created a powerful foundation allowing for the resurgence of Nepal’s tigers.

Further solidifying Nepal’s foundation of conservation success, the government recently increased the number of soldiers patrolling the country’s protected areas to 8,000. Now, with approximately one law enforcement ranger stationed per square kilometer, Nepal’s anti-poaching forces are orders of magnitude greater than any other tiger range state in Asia. The presence of these wildlife soldiers – thousands of well-equipped boots on the ground – and the empowerment of park wardens, Nepal Police, attorneys and judges to apprehend and deliver the maximum penalty to wildlife criminals serve as considerable deterrents to poaching syndicates. Understanding that conservation is lost without the buy-in of local people, Nepal maintains a commendable commitment to community-centered initiatives that secure the livelihoods and well-being of those sharing their homes with wildlife. Conservation incentives include employment opportunities in and outside of protected areas, such as eco-tourism positions; well-managed buffer zones around reserves where communities can safely reside; and extensive human-wildlife conflict mitigation efforts, including relief funds for conflict victims.

Panthera Tiger Program Senior Director, Dr. John Goodrich, stated, “The announcement that Nepal’s tigers are on the rise is further proof that the country is building a spectacular legacy of life for the endangered tiger. At a time when sobering images and tales of the species’ decline dominate news cycles, Nepal is truly a shining star in the world of tiger conservation.”

Goodrich continued, “Tiger recovery this rapid is almost unheard of, and Nepal’s outstanding commitment to protecting its wildlife, despite having among the highest human population densities in the world, is an achievement to be celebrated and modeled by other Asian nations fighting for the survival of their heritage and this extraordinary species.” ZSL Director General, Dominic Jermey, stated, “This is a stellar example of how determination and partnership can produce outstanding results for tiger conservation. The Nepal Government has taken a stand, with support from ZSL, Panthera and many other NGOs and communities, against wildlife crime. The resulting increase in tiger numbers just proves their action has paid off. The illegal wildlife trade is systematically destroying wildlife on an industrial scale; unchallenged, it would extinguish all the high value species that are Nepal’s rightful national heritage. That this is now not happening puts Nepal in the frame to join other countries showing global leadership in combatting the illegal wildlife trade when nations gather at the London conference next month.”

Nepal’s Director General of the Department of National Parks and Wildlife Conservation, Mr. Man Bahadur Khadka, stated, “It is a moment of pride for all Nepalese people especially to those of us who have worked tirelessly to achieve this success. I extend my sincere gratitude and thanks to the local communities around the tiger habitats, staff at the DNPWC and Department of Forests and Soil Conservation under the Ministry of Forests and Environment, Nepal army, Nepal Police, other government stakeholders and relentless support received from conservation partners.”

Mr. Man Bahadur Khadka continued, “Nepal is one of the few countries that committed to double its tiger numbers by 2022 at the Global Tiger Summit held in St. Petersburg in 2010. The current figure shows we are on the right path, but there is still a long and challenging journey ahead. Whatever the challenges may be, we remain committed to ensure that our parks and protected areas continue to display these magnificent animals for our future generations and forever.” Active in Nepal since 2014, Panthera supports conservation efforts across Banke, Bardia, Chitwan, Parsa and Suklaphanta National Parks to provide anti-poaching training for law enforcement rangers and monitor tigers and their prey. Panthera has provided the Nepalese government with nearly 1,000 camera traps and over 70 PoacherCams – a cutting-edge conservation technology tool that can differentiate between people and wildlife to alert law enforcement of poaching threats in real time.

Panthera was founded in 2006, and is devoted exclusively to preserving wild cats and their critical role in the world’s ecosystems. Panthera’s team of leading biologists, law enforcement experts, and wild cat advocates develop innovative strategies based on the best available science to protect cheetahs, jaguars, leopards, lions, pumas, snow leopards, and tigers and their vast landscapes. In 36 countries around the world, Panthera works with a wide variety of stakeholders to reduce or eliminate the most pressing threats to wild cats — securing their future, and ours. Visit panthera.org.

Founded in 1826, the Zoological Society of London (ZSL) is an international scientific, conservation and educational charity whose mission is to promote and achieve the worldwide conservation of animals and their habitats. Our mission is realised through our ground-breaking science, our active conservation projects in more than 50 countries and our two Zoos, ZSL London Zoo and ZSL Whipsnade Zoo. For more information visit www.zsl.org

Should we really set aside half the earth for animals?