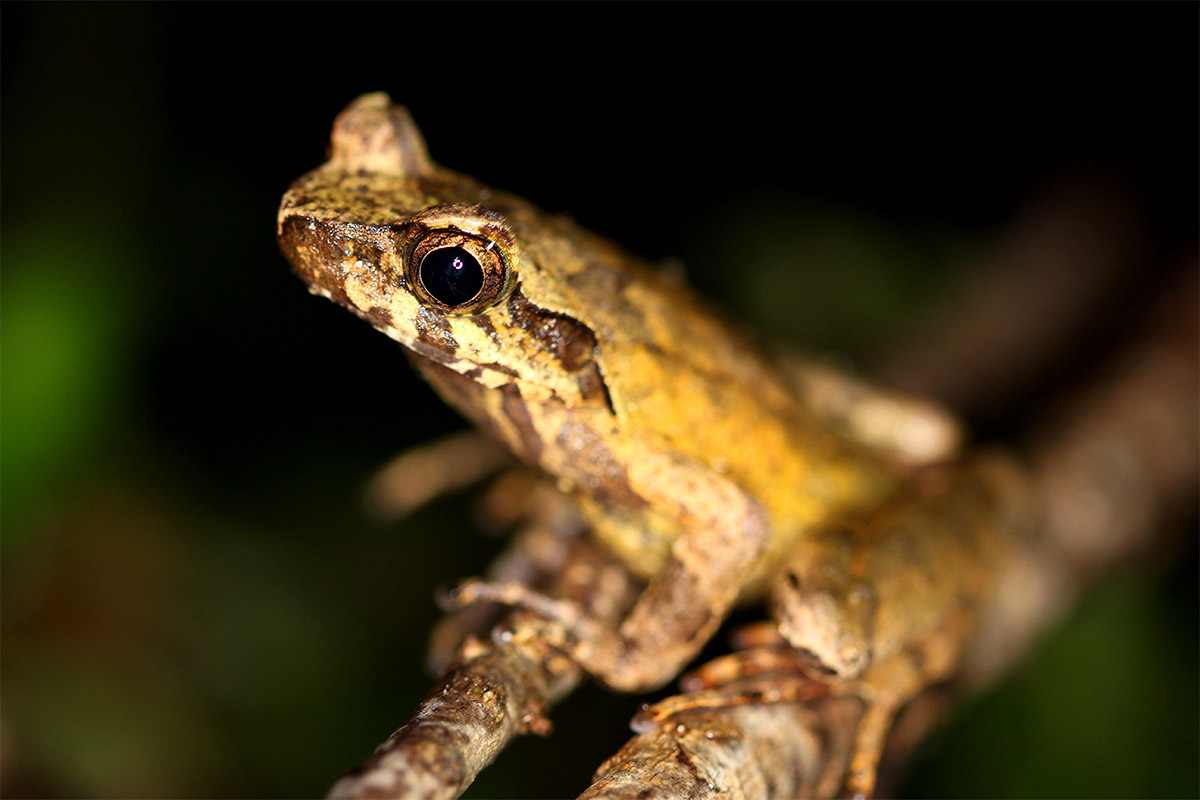 Named by conservationists as the Mount Fansipan horned frog (Megophrys fansipanesis) and the Hoang Lien (pronounced as ‘written’) horned frog (Megophrys hoangliensis) – after the places where they were found – the remarkable discovery demonstrates just how little is known about this fascinating region of Vietnam.

While the discovery of a new species is always a cause for celebration, ZSL’s amphibian experts are already concerned that the two species could be facing the risk of extinction, due to development of their habitat to support the large numbers of tourists who flock to the area to enjoy the cool climate and natural beauty.

Published in Zootaxa in November 2018, the frogs were described by a team of experts from ZSL, the Australian Museum Research Institute and The Centre for Rescue and Conservation of Organism, with the support of the Natural History Museum, London. ZSL’s Curator of Herpetology, Benjamin Tapley, described the finding as exciting and difficult, but the future as worrying.

“The discovery of these frogs is extremely exciting but identifying them as two new species has been by no means easy. At first glance, the frogs looked very similar and even their calls sounded identical, like a loud insect chirp on repeat – but we simply couldn’t identify them as any known living species just by looking at them. It wasn’t until we recorded and analysed their calls and DNA, that the pieces of the puzzle came together.

“Because frogs are so vulnerable to predators when they call, they stopped calling when we approached. This meant that we often had to wait for long periods of time in precarious situations, such as, in the middle of a waterfall in the depths of the night – just waiting for a few snippets of audio. Yet collecting these calls was vital in allowing us to finally confirm they are in fact, two, completely new separate species.

“However, we did unfortunately observe an enormous amount of habitat destruction and degradation at many of our study sites due to infrastructure being built for tourists and from tourists littering and defecating in the streams; posing a long-term threat to the species if controls are not put in place soon.

“There is also an urgent need for additional amphibian surveys, particularly at high elevation sites in Vietnam where other undiscovered and potentially highly-threatened amphibian species could occur. However, the important message is, now that these species are named – we can determine how to try and conserve them”. The discovery concludes the third new frog species to be discovered from Mount Fansipan, in five years, with the first being found in 2017 by the same ZSL lead team. This most recent discovery occurred during an expedition that was funded by The Ocean Park Conservation Foundation Hong Kong and the Mohamed bin Zayed Species Conservation Fund.

Mr Chung Nguyen, from the Centre for Rescue and Conservation of Organism in Vietnam, said the finding demonstrated the wildness of the area.

“The discovery of two new species in the Hoang Lien Range demonstrates how little we know about amphibians in this region. The fact that we are still finding new species that are potentially extremely threatened, highlights the need for ongoing research, so that we can determine the true diversity of amphibians in the Hoang Lien Range and protect them”.

Since 2004, there has been an astonishing number of new amphibian species discovered worldwide, with 87 new amphibian species described from Vietnam alone. Mount Fansipan, in the Hoang Lien Range is Indochina’s highest mountain and is particularly rich in frog species; lying in a junction between two major hotspots for biodiversity. As a result, this region is home to more than 80 species of amphibians alone. However, the promotion of responsible ecotourism must be addressed, to ensure the incredible amphibian diversity located in the region, is safeguarded, before it’s too late. Who are the organisations involved?

Founded in 1826, ZSL (Zoological Society of London) is an international scientific, conservation and educational charity whose mission is to promote and achieve the worldwide conservation of animals and their habitats. Our mission is realised through our ground-breaking science, our active conservation projects in more than 50 countries and our two Zoos, ZSL London Zoo and ZSL Whipsnade Zoo. For more information visit www.zsl.org

The AM, founded in 1827 is the nation’s first museum, and is an internationally recognised natural science and culture institution focused on Australia and the Pacific. As custodian of more than 18 million objects, the AM is uniquely positioned to provide a greater understanding of the region through its scientific research, exhibitions and public and education programs. Through the Australian Museum Research Institute (AMRI), the AM also has a leading role in conserving Australia’s biodiversity through understanding the environmental impacts of climate change, potential biosecurity threats and invasive species.

Centre for Rescue and Conservation of Organism

The Centre for Rescue and Conservation of Organism in Sa Pa, (Vietnam) is entrusted with the tasks of rescuing, protecting and breeding plant and animal species; providing advice on rescue and conservation measures; establishing a biodiversity database; and increasing international cooperation in the field of conservation.

OPCFHK is committed to advocating, facilitating and participating in effective conservation of Asian wildlife, as well as their habitats through partnerships, fundraising, research and education. It envisions a world where Asian wildlife remains biologically diverse under the stewardship of humans, corporations and governments.