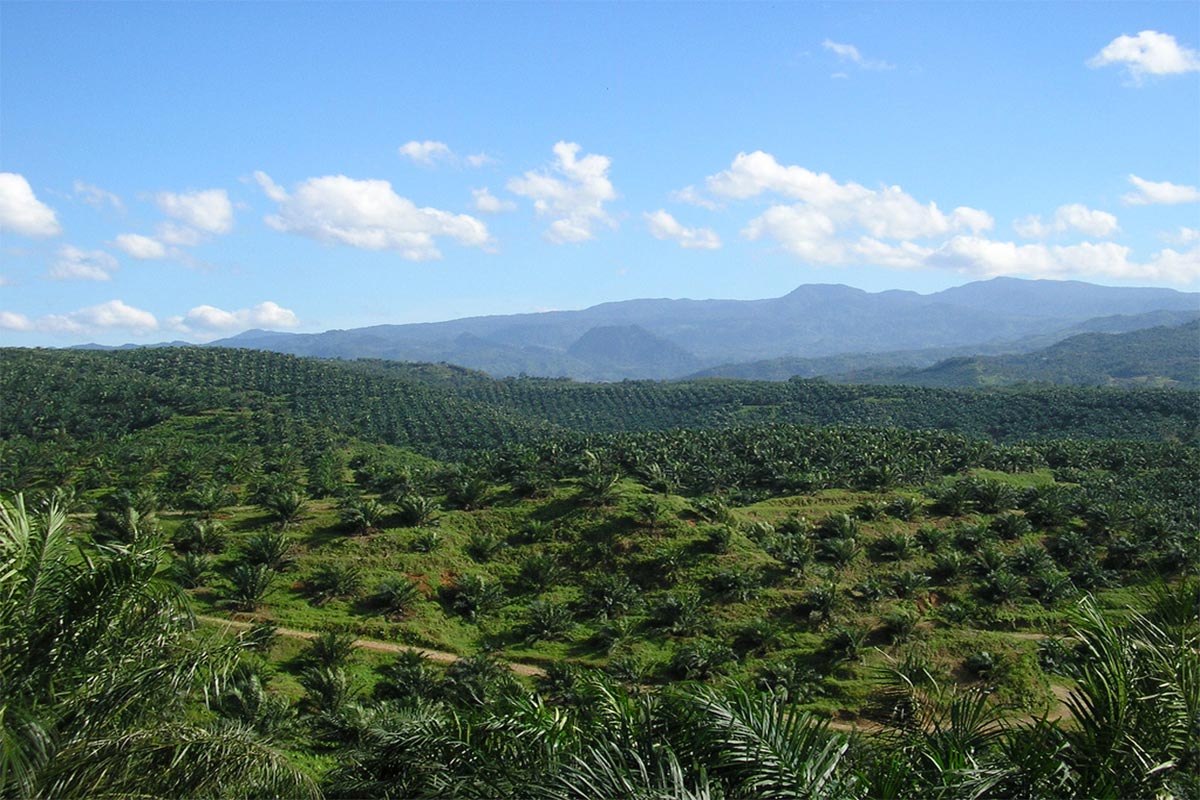 By Loren Bell for Mongabay.org

A palm oil supplier to PepsiCo, Mars, Hershey and Johnson & Johnson has resumed clearing intact forest in West Papua, Indonesia, despite pressure by other major companies, many of which have since severed ties with the producer. The deforestation triggered a series of automatic alerts by Global Forest Watch, a satellite monitoring system operated by the World Resources Institute (WRI).

PT Permata Putera Mandiri (PPM), a subsidiary of Austindo Nusantara Jaya Tbk (ANJ), has cleared 4.5 square kilometres (1.7 square miles) of intact forest since May. While this may seem like a relatively small area (in 2017 Indonesia lost 13,000 square kilometres, or 5,000 square miles, of tree cover), it is significant for the location, ANJ’s previous history, and the fact that this action violates the well-publicized commitments many of its customers have made to not deforest, not develop on peatlands, and not exploit indigenous peoples, also known as NDPE.

“Forest must be cleared for plantation to remain profitable”

The Forest Trust (TFT), a nonprofit organization that helps businesses establish sustainable sourcing policies, has worked with many of the above companies on their NDPEs. In 2014, TFT engaged with its members and ANJ to address the deforestation issue, but reached an impasse when the company said it had to clear the forest for plantation to remain profitable.

“ANJ’s stated need to clear a significant proportion of their concessions to establish an economically viable operation led to stalemate,” Mark Sanderson, communications director for TFT, told Mongabay. “TFT felt there was little more we could offer to resolve this situation; one in which we regard ANJ, an otherwise well-run palm oil business, to have made a catastrophically bad business decision.”

Nestlé, Mars, Hershey and Johnson & Johnson are all TFT member companies that listed ANJ as a direct or indirect supplier at the beginning of the year. Of these, only Nestlé has confirmed it is actively working to remove ANJ from its supply chain. PepsiCo is not a TFT member, but does belong to the Roundtable on Sustainable Palm Oil (RSPO), a nonprofit sustainable certification group. PepsiCo continues to source indirectly from ANJ, also an RSPO member.

Nestlé owns more than 2,000 brands, including Gerber baby food, DiGiorno and Tombstone frozen pizzas, Häagen-Dazs ice cream and Purina pet food. It says that while it doesn’t source directly from ANJ, it’s aware that oil from the company is still entering its products.

“Most of our suppliers have already removed ANJ from their supplier base, and we are working with those remaining to ensure that ANJ is removed from Nestlé’s supply chain,” a spokesperson told Mongabay.

The company has set a deadline for 2020 to ensure it is meeting its NDPE commitments, and to that end is working with TFT to implement the Starling satellite monitoring system to directly watch every concession in its supply chain. The system will be in place by the end of the year, and Nestlé will make the findings publicly available by March 2019.

In May, Nestlé also published a blacklist of 10 suppliers it has already removed or is actively removing from its palm oil pipelines. Although ANJ is not on that list, the company spokesperson detailed the steps taken in response to ANJ’s continued deforestation.

“We have been in contact with Fuji Oil” — which sources palm oil from ANJ — “to ensure ANJ is removed from their mills list,” Nestlé’s spokesperson said. “While the exit procedure can take up to six months, we are working with all our suppliers to ensure that blacklisted suppliers/plantations are completely removed from our entire supply chain … We recognize there is more work to be done, but we are committed to ensuring the responsible sourcing of our palm oil.”

Does a Mars a day keep the forest away?

Mars Incorporated is best known for its candy, but also produces food under several labels including Tasty Bites and Uncle Ben’s, and manufactures several pet food brands including IAMS, Pedigree and Whiskas.

Mars, a TFT member, lists ANJ as a direct supplier, despite having a robust NDPE commitment. Mars did not respond to Mongabay’s requests for comment.

While the NDPEs are seen by many as a step in the right direction, a lack of accountability and a 2020 deadline has raised concerns about whether these commitments are more than just greenwashing. A recent Greenpeace report details several hotspots of deforestation from oil palm plantations that sell to companies with NDPEs.

Satellite monitoring by initiatives like WRI’s Global Forest Watch is making it harder for companies to deny knowledge of forest clearing by suppliers. But how aggressively each company responds is ultimately up to them, and is often directly linked to how much pressure they receive.

“TFT expects its members to pursue their NDP implementations as quickly as possible, in other words ASAP and ideally before 2020,” Sanderson said. “However, it is not within the remit of TFT’s member relationships to instruct our members to remove any company, which we regard as a business decision that is theirs alone.”

All talk, no action from PepsiCo

When asked how PepsiCo was responding to the deforestation, a spokesperson for the company initially said, “ANJ is not a direct supplier … PepsiCo does not directly or indirectly source from West Papua.”

This statement was later amended to add, “[W]e first learned of the alleged ANJ violation from Greenpeace’s September report. As such, we are currently evaluating the relevant information and may choose to take further action.”

PepsiCo’s sustainability plan does not indicate that it actively monitors its supply chain via satellite or on-the-ground verification. The company does, however, accept grievances via email from third parties with potential concerns regarding PepsiCo’s sourcing of agricultural commodities.

“PepsiCo takes a holistic, inclusive and collaborative approach to the entire value chain of which monitoring is one piece,” the company spokesperson said. “As such, we have not yet committed to one satellite monitoring system as it will take a broad range of stakeholders to work collaboratively to better understand how on-the-ground action can be taken when violations do occur.”

Who else is involved?

Several other major suppliers have taken active measures to separate themselves from ANJ in recent months, include Unilever, which suspended trade with Felda-IFFCO (which purchases from ANJ). Bunge Loders Croklaan, a palm oil processor and member of TFT, suspended dealings with ANJ in May.

ADM, another TFT member, has logged a grievance by the watchdog group Mighty Earth concerning ANJ and reported that it has “intensified dialogue with suppliers” in response.

Mongabay did not contact Johnson & Johnson and Hershey, both TFT members, for comment. J&J includes ANJ mills in its list of potential indirect suppliers, and Hershey indicates it purchases from Fuji Oil.

Since several million GLAD alerts are triggered each month, WRI further filters that data by calculating the frequency and density of alerts within 100-square-kilometre (39-square-mile) cells weighted by their protection status and the “intactness” of the forest they contain.

WRI told Mongabay that although the algorithm identified four different areas of active deforestation within concessions in Papua, it chose to focus on ANJ’s subsidiary both for its history and because it hadn’t highlighted it before. Historical satellite imagery indicates the company previously cleared around 15 square kilometres (5.9 square miles) of forest between 2014 and 2017.

Editor’s Note: This story was powered by Places to Watch, a Global Forest Watch (GFW) initiative designed to quickly identify concerning forest loss around the world and catalyze further investigation of these areas. Places to Watch draws on a combination of near-real-time satellite data, automated algorithms and field intelligence to identify new areas on a monthly basis. In partnership with Mongabay, GFW is supporting data-driven journalism by providing data and maps generated by Places to Watch. Mongabay maintains complete editorial independence over the stories reported using this data.

This article first appeared on Mongabay.org: Palm oil supplier to PepsiCo, Mars, and Hershey resumes deforesting in Indonesia. Please check out their website and follow them on social media to support their investigative reporting on the conservation front.

Related Topics:AsiaDeforestationPalm Oil
Up Next

Dead whale found with 6kg of plastic in its stomach