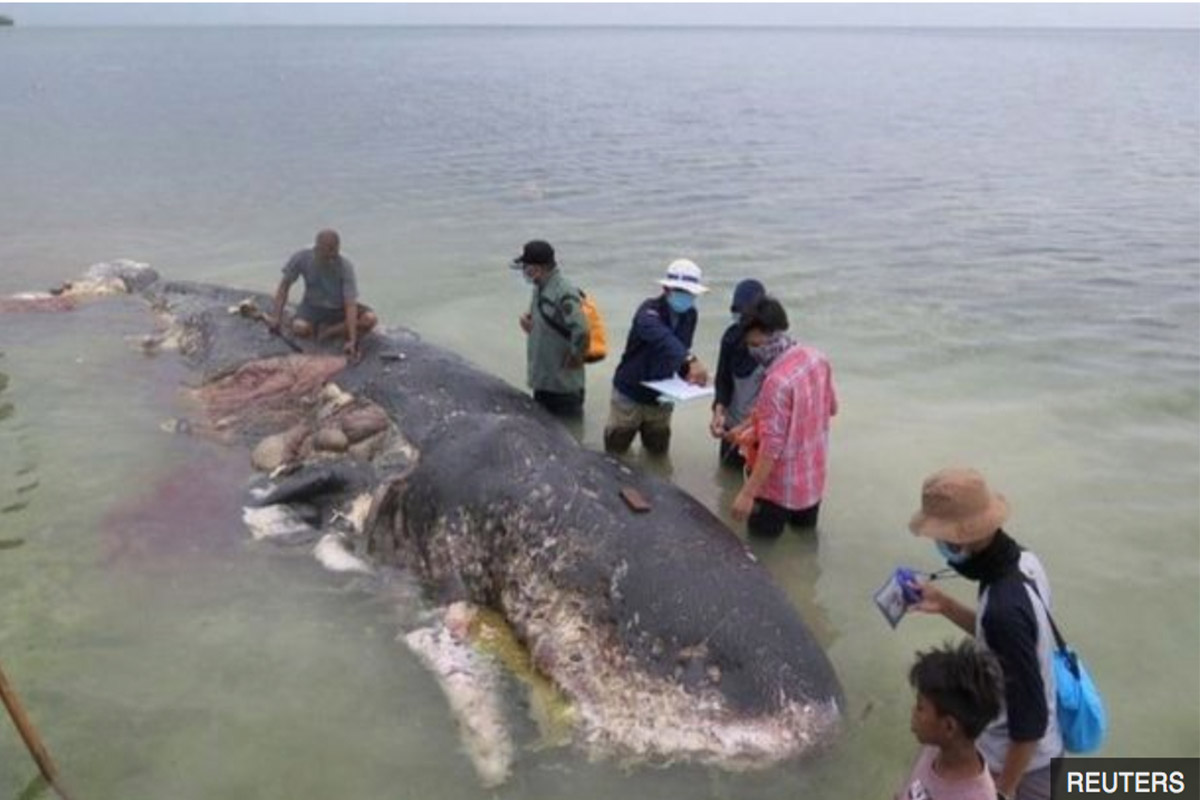 The whale was found with a mass of human litter and plastic in its intestines. Image: Reuters.

A dead sperm whale found in Indonesia had ingested ‘6kg of plastic’ according to wildlife officials. Items found inside the animal included over 100 plastic cups, multiple bottles, dozens of plastic bags and even pairs of flip-flops.

The whale was close to 10 metres long, and washed up to the shoreline near Kapota Island earlier this week.

“Although we have not been able to deduce the cause of death, the facts that we see are truly awful,” said Marine species conservation co-ordinator at WWF Indonesia, Dwi Suprapti, according to the Associated Press.

Suprapti added that they couldn’t be sure if the plastic was the cause of death, but regardless, the disposal of plastic is a growing issue within the Asian nation. According to a report by Ocean Conservancy in 2015, around 60% of the plastic waste found in the ocean is from China, Vietnam, Thailand, the Philippines and Indonesia. WWF posted on Instagram showing some of the shocking contents, which highlight further human impact on marine life. Image: WWF.

BBC’s documentary series, Blue Planet II, spurned a wave of efforts globally to decrease our impact on marine life, with citizens particularly struck by the impact of plastic on the world’s oceans. But the issue continues to grow.

Reporting on this story, the BBC wrote: “Plastics bags are believed to kill hundreds of marine animals there each year. In June, a pilot whale died off southern Thailand after swallowing 80 plastic bags.”

What is a sperm whale?

Sperm whales are the only species in their genus (Physeter) meaning the loss of the species would dramatically impact global biodiversity according to recent studies. They are the world’s largest toothed predator, weighing up to 67,000 kg and reaching lengths of anywhere from 12 to 20 metres, depending on who you believe.

According to the Dominica Sperm Whale Project, numbers have dropped rapidly in recent years:

“Globally it is estimated that there are around 360,000 sperm whales down from about 1.1 Million prior to ancient and modern mechanised whaling which only stopped in the late 1980’s, not so long ago.”

The group say that threats to the species are numerous:

“Chemical and heavy metals are being found in the tissues of animals from around the world, including those as far away as Antarctica. Animals can become entangled in fishing gear including longline, gill nets, and FADs; and ship strikes are a concern for sperm whales, particularly in island areas like the Caribbean where everything is imported and fast ferries transit between islands. But ocean noise is increasingly being seen as a major threat to cetaceans around the world.”