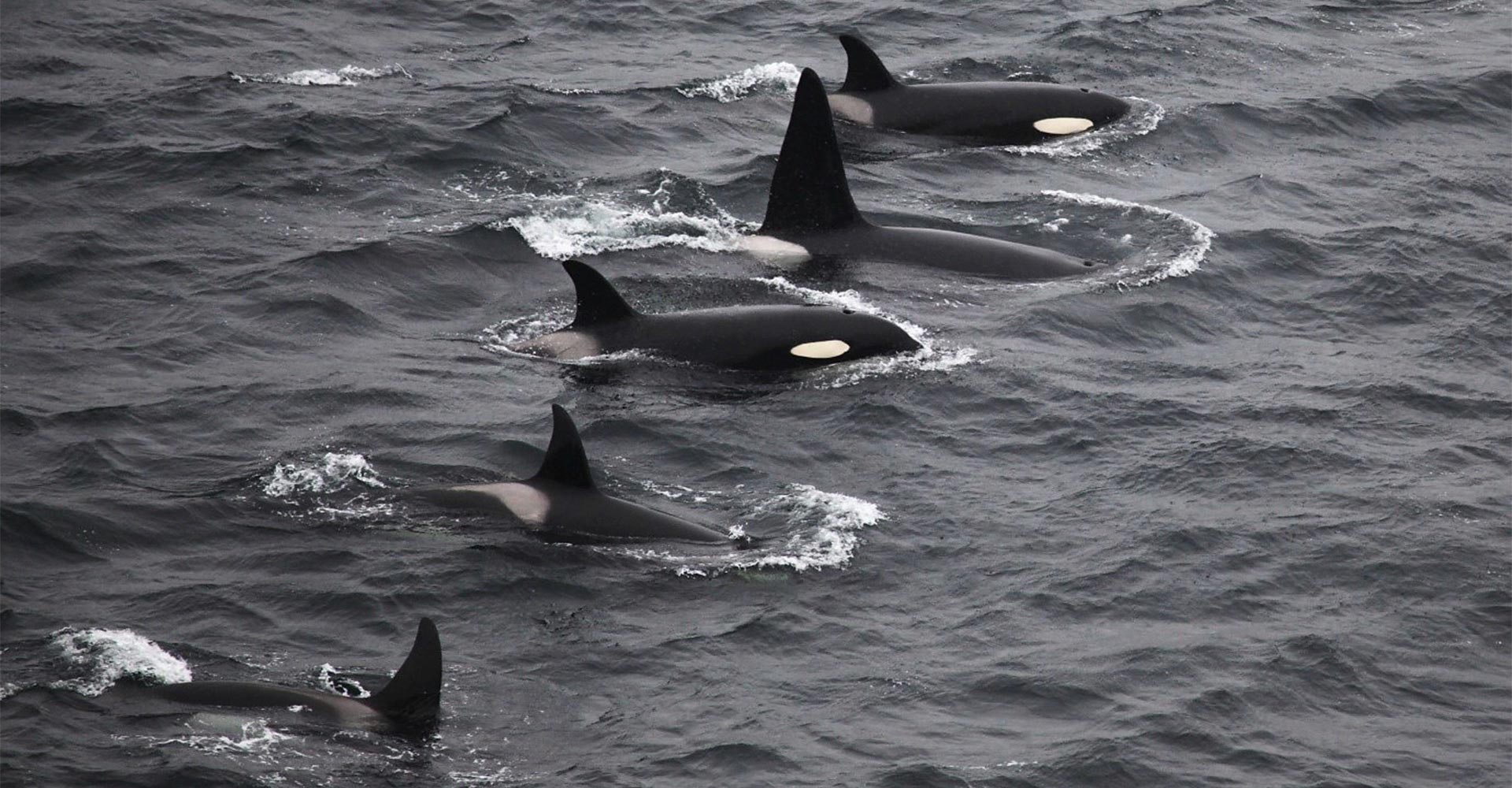 Orcas, otherwise known as Killer Whales, are rare around the British Isles, but can be seen mainly around the Hebrides and the Northern Isles of Scotland (Orkney and Shetland). It seems that those seen around the Northern Isles are from a population that ranges between Norway, Iceland and the Faroes, visiting the northernmost North Sea in the winter to feed upon herring or mackerel, and then coming closer to shore between May and August, where they have even been observed chasing seals.

One of the mains threats to Orcas are toxic chemicals, which accumulate within the prey of Orcas, which is then passed on to them through the food chain. An Orca called Lulu was found dead in the Isles of Tiree in Scotland during 2016, after becoming entangled within fishing line was found to have among the highest levels of polychlorinated biphenyls (PCBs), ever recorded. Although these chemicals were banned in the 70’s they are still present within the environment. Lulu’s levels of PCBs highlighted the threat these chemicals raise for Orcas and others cetaceans.

By-catches are another threat for Orcas, with animals being caught in gill nets, and mackerel purse-seine fisheries. So it’s important to monitor the movement and numbers of these animals. Orcas are under threat – John Irvine, All Rights Reserved

Who is Sea Watch Foundation?

Sea Watch Foundation is a national charity in the UK working to improve the conservation and protection of cetaceans in British and Irish waters.

Through a continuous programme of research and monitoring, they provide vital information on changes to the distribution and status of cetacean populations. This information is then used to raise awareness of any issues and prompt change to help protect these spectacular creatures.

The information gathered by Sea Watch and their network of observers and volunteers has been the primary source of knowledge about the relative status and distribution of cetaceans around the British Isles. What is happening in the UK in May?

Orca Watch is a Sea Watch Foundation event originally organised by Regional Coordinator Colin Bird. The event is now in its seventh year and continues to grow in popularity.

This year’s event is planned for late May (26 May to 2 June) to coincide with the annual passage of Orcas, which can be observed in the Pentland Firth (Scotland). The aim of Orca Watch is to collect vital data on this and other cetacean species in the area, whilst informing the public about these enigmatic animals just off their shores! Orcas need your help this may – John Irvine, All Rights Reserved

How can I get involved?

Come along and take part!

This year we are looking to expand the data collection to different locations, other than our main site at Duncansby Head, hoping to have sites all around North Scotland, Orkney and Shetland.
With our event taking place alongside the school holidays, this would be a great event for children to learn more about cetaceans found around the UK, and it’s a wonderful opportunity to see Orcas and help collect data to protect them!

To find out about the event, as well as other work The Sea Watch Foundation does please visit our website: www.seawatchfoundation.org.uk.

All images in the article ‘Why Orcas Need Your Help This May’ courtesy of Sea Watch Foundation – All Rights Reserved 2018.