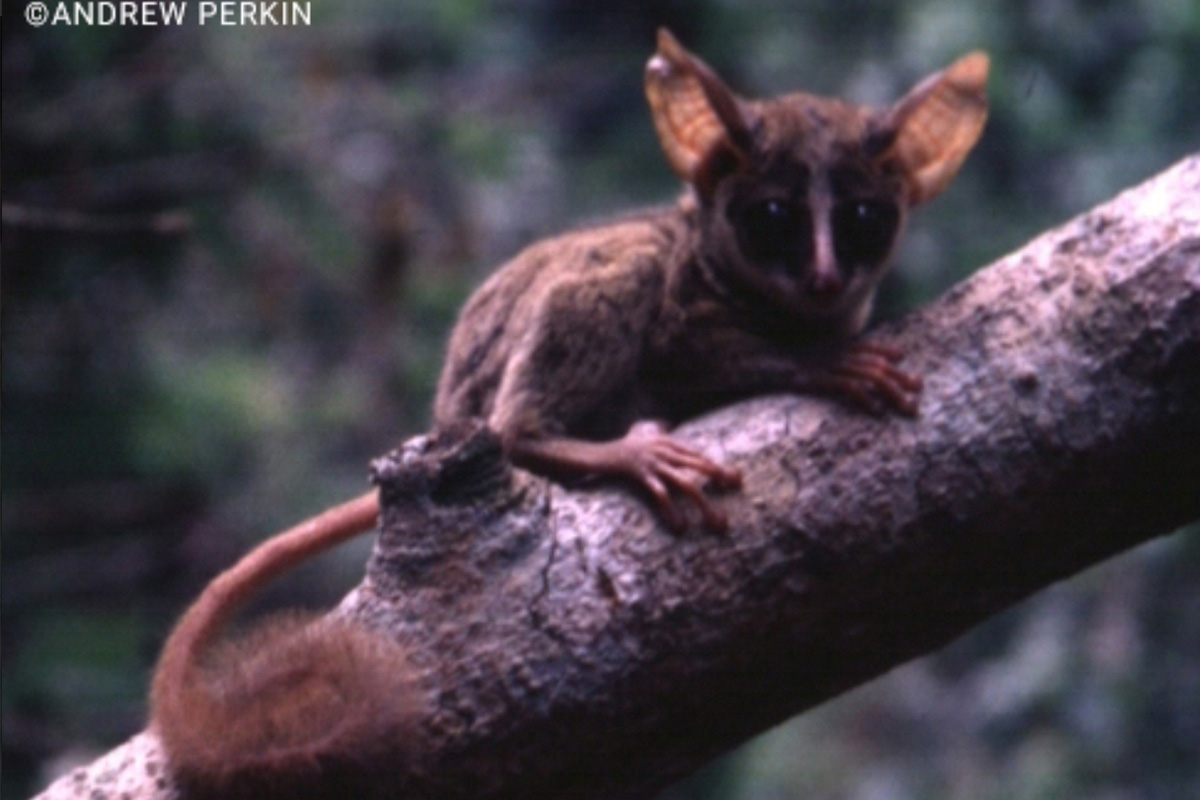 The Pygmy bush baby is known for its distinctive tail. Image from ZSL EDGE Program, by Andrew Perkins.

About the Pygmy Bush Baby

The Pygmy bush baby (Galagoides rondoensis) is a species of primate native to Africa. It is the smallest known subspecies of bush baby, or Galago, often weighing less than 100 grams. It is unique amongst its Genus due to a bottle-brush style tail, and is particularly distinctive thanks to around 18 different vocalisations.

The dwarf galago is endemic to coastal Tanzania, and thanks to habitat destruction is now restricted to just eight isolated patches of forest. They are based across East Africa in woodlands and bushlands. Bush babies are nocturnal, and nest in the canopy during the day. Image from ZSL EDGE Program, by Johan Karlsson.

The tiny primate, famous for the gorgeous, relatively massive eyes fronting its face, builds sleeping nests in the canopy of its home range, or sleeps in natural hollows, and feeds on insects and fruit (making it omnivorous). During the night, when awake, it moves lower in the trees than its sleeping sites, inhabiting the understorey of the forest.

They can live up to 4 years in the wild, where they are under threat not only from humans but as a source of food for eagles, owls, snakes and genets. At night, Pygmy bush babies venture down from the canopy to hunt in the leaf litter. Image from ZSL EDGE Program, by Andrew Perkins.

Habitat destruction and illegal hunting has pushed this species to the brink. Sadly, little is known about them compared to other critically endangered species due to a gap in conservation work. The Pygmy bush baby is so endangered however that the Zoological Society of London added the species to it’s EDGE list of genetically distinct and endangered animals in 2010.

Justine Gwegime, working for the London-based charity, secured funding in 2014 to work on ensuring the future distribution and habitat of the Rondo galago and to improve conservation knowledge and attitude within the communities surrounding the species’ habitat in Tanzania.

Another group working to save the animal is the African Wildlife Foundation, who are bringing together communities and private investors to construct conservation tourism lodges like The Sanctuary at Ole Lentille in Kenya. The lodge provides sustainable income for the community, and the 20,000-acre conservancy is a safe home to a variety of wildlife. Through umbrella conservation projects such as these, they hope to protect habitat for the pygmy bush babies in Tanzania. Habitat destruction is behind the massive decline in the species. Image from ZSL EDGE Program, by Andrew Perkins.

In a study for the Rufford organisation however, researchers Ntongani, Nyinondi and Keyyu found that destructive tourism practices could have further impacts on the future of the bush baby, writing:

“Non-consumptive utilization ensures the promising future of G. rondoensis in [Saadani National Park, Tanzania]. However, the park management develops tourism facilities like trail, campsites and hotels. Presently, we know and agree with Perkin (2000) that “G. rondoensis is more insectivorous than frugivorous and hunts its prey in the leaf litter. These specific factors require ecologically stable closed-canopy habitat that maintain a deep leaf litter layer to provide the necessary amounts of insects and reptiles. The disturbance of forests by either fire or logging will allow too much light and heat in and reduce the leaf litter cover that this species requires.”

Their recommendations set out a path to protect the habitat for Dwarf galagos to allow the populations to bounce back:

“The conservation move should be to sensitise park authority to design the current sites where the G. rondoensis has been sited as a no-use zone, until population size, status and viability has been established. This may require more scientific evidence to justify the site as a no-use zone for a specified time.”

There is a long way to go for the survival of this marvellous little primate to be ensured, but through supporting groups like AWF and ZSL you can play your part in delivering a brighter future.