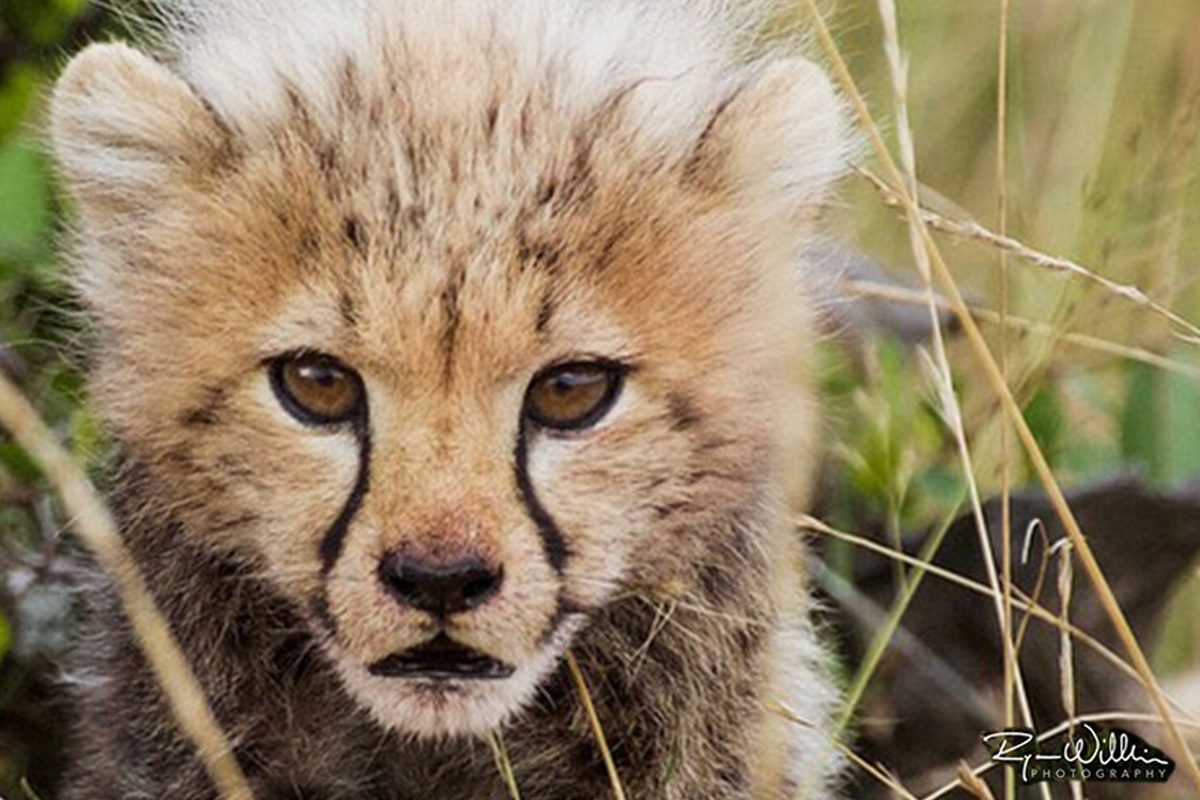 Cheetah cubs have a very low survival rate in the wild. Image courtesy of Ryan Wilkie.

As primarily a researcher-practitioner in conservation, my photography has always been inextricably linked to the promotion of conservation and story-telling of landscapes and species under threat. It exists as a reflection of my research and relationships with individual animals. “Cheetah cubs face an uphill battle in the race for survival.” One of Imani’s cubs tries to follow her up a tree in the Maasai Mara. Cheetah’s use trees and termite mounds as lookout points to scan the landscape for danger and potential prey. Image courtesy of Ryan Wilkie.

Research, in particular long-term monitoring of individual animals and populations by dedicated conservationists, provides a unique lens into the lives of animals. It is what has made wildlife documentaries like the BBC’s Dynasties so compelling – that detailed knowledge of the life histories of particular individuals or families that allows film-makers (and photographers) to tell a personal story that speaks to the challenges faced by an entire species.

With cheetahs being the fastest animal on land much of the attention is focused on their speed and agility as hunters. This was the draw of the BBC documentary The Hunt, which featured Malaika, perhaps the most well-known cheetah in the Maasai Mara, as its star. The duels between hunter and hunted are arguably the pinnacle of wildlife spectacle but there are other more intimate and important stories to be told about the lives of cheetahs in the Maasai Mara, and for that we need different stars. Amani glances over at her cubs with a hyena approaching, knowing she will have to fend off this intruder if her cubs are to have any chance of surviving. Image courtesy of Ryan Wilkie. Imani and her four cubs on the lookout from the top of an old termite mound. Image courtesy of Ryan Wilkie.

For all their success as hunters, owing to their tremendous speed and agility, cheetahs are at a disadvantage when it comes to defending themselves and their food against other predators. Lions, leopards and hyenas frequently steal kills from cheetahs and will kill both adults and baby cheetahs. In the ongoing and brutal battle among predators over resources, cheetahs are near the bottom of the food chain.

Owing to these threats from other predators and growing pressure from humans, cheetah cub mortality is incredibly high. The average survival rate for cheetah cubs in the Maasai Mara is just 1 in 4 but in other places it can be as low as 1 in 10. With so few cheetahs reaching the age of independence, new born cheetah cubs face an uphill battle in the race for survival. Their future depends on the skills of their mother as a hunter and on her ability as a parent to pass on her knowledge and survival strategies. One of Amani’s cubs lock eyes and stares down the lens with a look of steely determination. Image courtesy of Ryan Wilkie. Amani brings back a Thompson’s gazelle for her hungry cubs. Image courtesy of Ryan Wilkie.

Few cheetahs can claim as successful a dynasty as Amani. She is a paragon of motherhood demonstrating time and again her capacity to provide for her cubs and defend them from lions, hyenas and even leopards, putting her life on the line so that her cubs might stand a chance of escaping. After a hyena happened upon her and her three-month old cubs feeding on a gazelle, I watched as she chased and harried the larger and stronger intruder to distract the hyena and give her cubs precious seconds to get away.

Her daughter, Imani, remains one of the most dynamic and playful mothers I have ever seen. All of that time in play teaching her cubs valuable skills that could mean the difference between life and death. I watched for hours as she taught her cubs to stalk, pounce and evade one another. Imani and her cubs at play. Image courtesy of Ryan Wilkie.

Selenkei, daughter to Imani and Amani’s grand-daughter, has become one of the most successful females in the Mara, recently raising a litter of four cubs to independence, passing on the knowledge she had gained from her mother and grandmother to the next generation of Mara cheetahs. One of Imani’s cubs clambers up a nearby bush only to get stuck at the top. Image courtesy of Ryan Wilkie.

You can find out more about the Mara cheetahs by following the Mara-Meru Cheetah Project on Facebook.