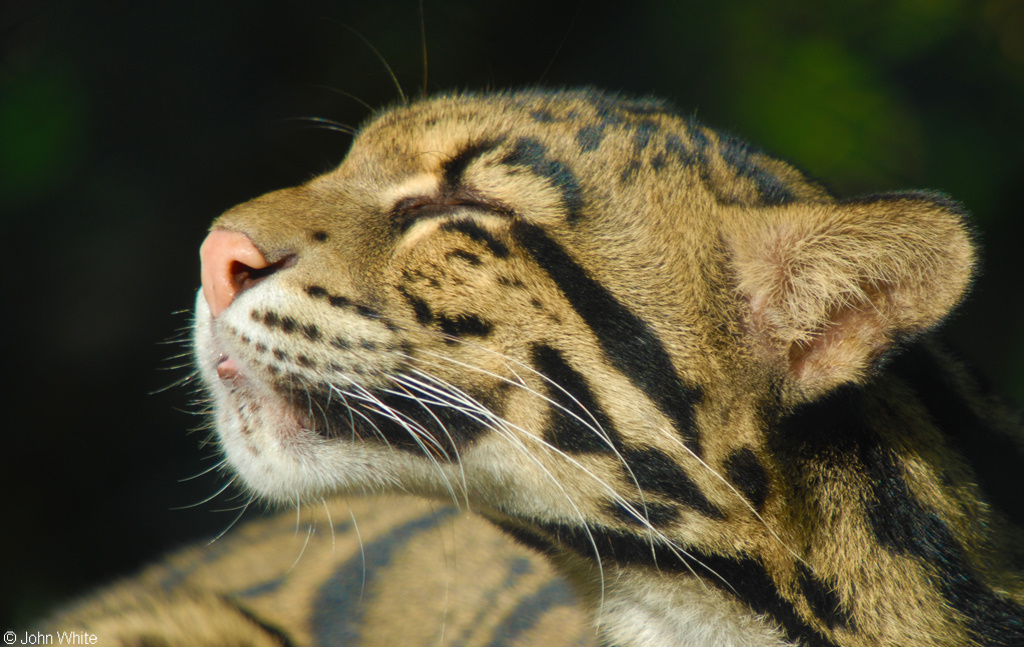 About the Clouded Leopard

Whilst a big cat descendant from the Panthera lineage, the clouded leopard (Neofelis nebulosa) is believed to represent the first break away from the line at around six million years ago and shows an evolutionary step between large and small cats. They are often referred to as the modern-day sabre-tooth, boasting the largest canines to body size of any cat. The impressiveness of their teeth is perhaps only surpassed by the size and dexterity of their paws and tail, which give them almost unbelievable climbing prowess. Researchers have recorded these cats, weighing up to 20kg and growing to over a metre long (excluding the tail), climb head-first vertically down a tree, hang from branches like bats, and climb horizontally along the bottom of a branch before jumping whilst in this position. It is hard to describe how incredible some of these feats are.

Dr Wai-Ming Wong, Assistant Director of Field Programs for Panthera, says these cats have perfectly evolved for life in the trees:

“They have a number of anatomical adaptations to suit this lifestyle, including a three-foot-long tail that helps with balance as they climb and move along branches, relatively short legs for a lower center of gravity for tree climbing, and large paws with long claws to provide a large surface area for gripping tree branches and catching prey.”

For a long time believed to be nocturnal, activity peaks have relatively recently been recorded that indicate a crepuscular lifestyle (active in the hours before or just into dark).

Where are Clouded Leopards Found?

Clouded leopards are found from the foothills of the Himalayas in Nepal, through China and down to the Southeast Asian islands of Sumatra and Borneo. Classically considered a single species, the clouded leopard has recently been split into two species based on analysis of mitochondrial DNA, microsatellites and morphology. Neofelis nebulosa, which we look at here, is restricted to mainland Southeast Asia, and N. diardi is found on the islands of Sumatra and Borneo.

Their upper elevation limit is around 3000m, and prey is a smorgasbord of Hog deer, Slow loris, Bush-tailed porcupine, Malayan pangolin and Indochinese ground squirrel (Grassman et al. 2005). Being arboreal, they are also believed to feed on primates when possible. To this broad list, Dr Wong adds samba deer, muntjac deer, bearded pigs and mouse deer.

Despite this broad-range of habitats and regions, large territories and multiple prey species, it is thought that in 88% of inhabitant areas numbers have declined around 35% in just seven years. That’s a steep and dangerous decline.

Three subspecies of this cat are also recognised: N. nebulosa brachyurus from Taiwan and China, but thought extinct in the wild; N. nebulosa macrosceloides found from Nepal to Burma; and N. nebulosa nebulosa, inhabiting areas from southern China to eastern Burma.

The Clouded leopard is sought after by poachers for its stunning artwork of pelt, with attractive rosettes covering it from head to tail. Its habitat is quickly disappearing. Its populations are becoming fragmented. Some of its prey species are themselves at risk of extinction in some areas. So is there any hope for their survival?

Dr Wong of Panthera – the only organisation devoted exclusively to the conservation of the world’s 38 wild cat species – has spent a decade’s worth of experience in the field working on large mammal conservation, specifically tigers and bears, in Southeast Asia. As part of his current role, he provides technical and analytical support to the Species Directors and works with the Chief Conservation Officer (and President) and Scientific Team on planning, management, analysis and communication of Panthera’s field conservation activities. So what is his outlook on the species?

With high deforestation rates across Southeast Asia and the increasing number of clouded leopard pelts and canines emerging in the illegal wildlife trade, the need for systematic clouded leopard surveys is urgent.

“Determining and understanding clouded leopard population numbers and trends, habitat requirements, and how they respond to threats is critically needed to inform conservation planning and management initiatives for the species.”

He says that the clouded leopards share much of their range with larger species like tigers and leopards, and much of their data has been ancillary to surveys on the bigger cats.

“Through a collaboration of local and International NGOs and local Governments,” explains Dr Wong, “targeted camera trap surveys are now being conducted across mainland Southeast Asia for the Indochinese clouded leopard as well as the islands of Sumatra and Borneo for the Sunda clouded leopard to understand their conservation needs.”

Poaching and the Illegal Trade

With tiger numbers diminishing in the wild, Dr Wong says it is becoming harder for poachers to find them. This in turn makes the clouded leopard a suitable replacement.

He points out that the species is classified by the IUCN as Vulnerable and is included on CITES (the Convention on International Trade in Endangered Species of Wild Fauna and Flora) Appendix I. This Appendix, he continues, “prohibits international trade in specimens of these species, including pelts, bones, and teeth. Furthermore, hunting of clouded leopards is banned in most of the range countries, while there are strict regulations in the other range countries. Live clouded leopards are also being caught and sold into the illegal pet trade.”

Education and outreach programs are a critical part of any successful conservation work, and Dr Wong says here is no exception.

“Workshops are used to educate local people about the importance of conserving clouded leopards (and other species), the ecological roles they play, what threats they face, and what the communities can do to reduce these threats. When communities that live on the borders of protected areas understand why species like clouded leopards need to be conserved, how they can benefit from conservation and why poaching is unsustainable, a protective buffer zone of friendly forces is essentially created around these protected areas. The local communities become the “forest eyes” and will report illegal activities to the authorities or can act as informant networks to gather intelligence.”

He also says that poaching is now recognised as the primary threat to wild cats in the region, and in response to this law enforcement efforts have spiked across Southeast Asia. This is enhanced by international NGOs lobbying governments to improve policies and enhance judicial frameworks.

Solving the problems presented to clouded leopards of direct exploitation (poaching), range fragmentation and reduction in habitat quality is no easy task, and the race is now on to stop this being another species we see plummet to the Critically Endangered ranking. As it stands, their habitat in Southeast Asia is seeing the fastest deforestation rate of anywhere in the world, losing 1.2 to 1.3% per year since 1990 (FAO, 2007).

Whilst to date clouded leopards have avoided in depth surveys into definite numbers, we can be confident that in most areas they are in (at least) moderate decline. Panthera is working alongside other NGOs to halt this slide.