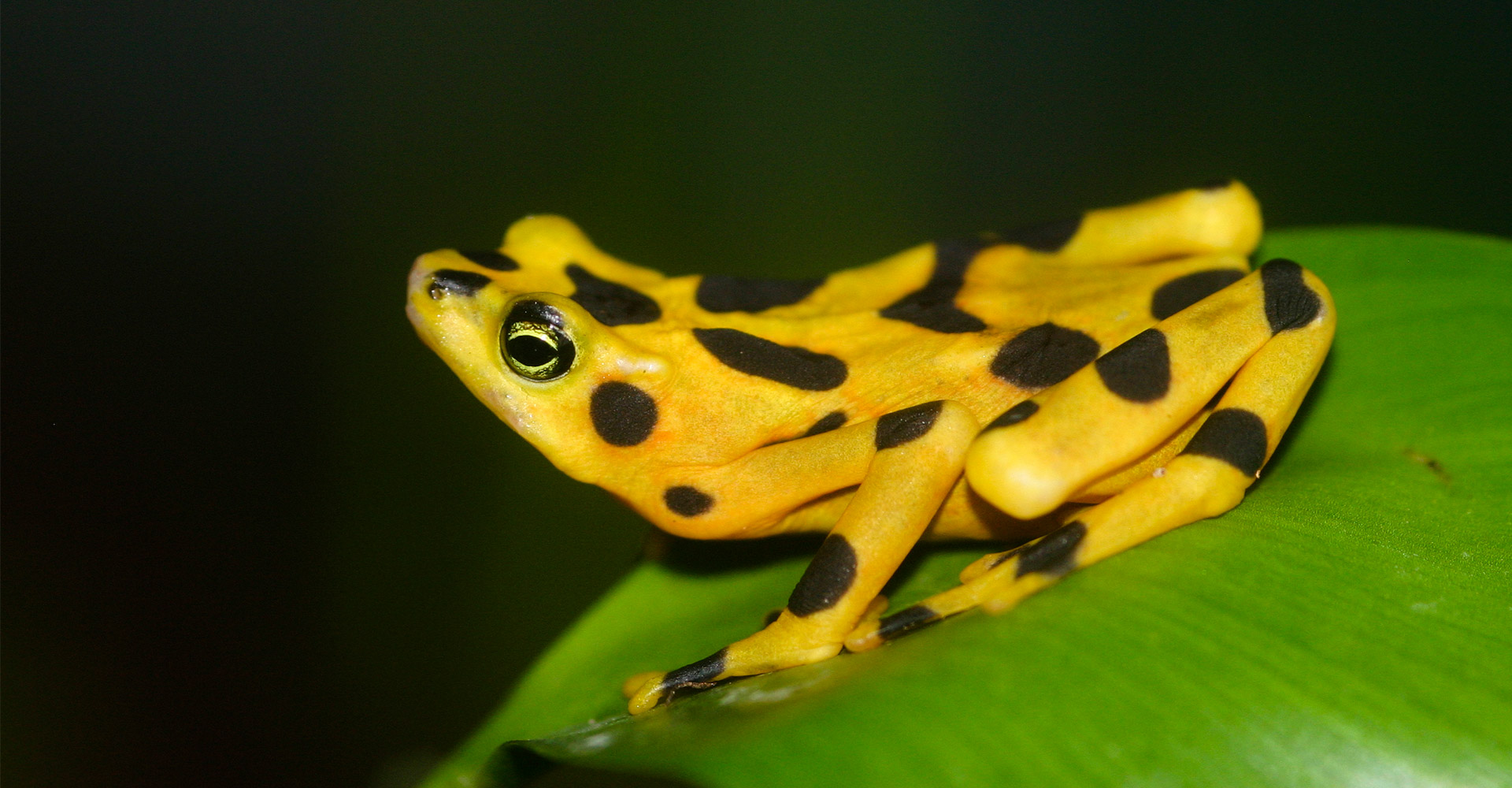 About the Panamanian Golden Frog

The introduction above would have been a common scene a mere 20 years ago throughout western-central Panama, South America, however, along with the demise of numerous other amphibian species in recent years, the number of Panamanian golden frogs (Atelopus zeteki) has depleted rapidly. First listed as critically endangered by the IUCN in 2006, some experts argue that the species may have been extinct in the wild since 2007.

A. zeteki belong to the well-known amphibian family Bufonidae, pertaining to the order anura. Bufonidae, often referred to as ‘true toads’, contain 34 genera globally, inhabiting every continent save Australia and Antarctica. Within this family, the genus Atelopus is spread broadly across Central and South America. They are sometimes known as ‘harlequin toads’ due to their dark coloured spots atop an oft-bright backdrop.

The golden frog displays sexual dimorphism in body size, with females about 45-55mm in length and males marginally smaller at 35-40mm. Although small, the species’ vibrant colouring is far from inconspicuous in the lush green environment in which they reside. The benefits of displaying such bright colouring, however, clearly outweigh the risks; like other species with brighter than usual colouring, such as the rough-skinned newt (Taricha granulosa) of North America, the golden skin is aposematic and issues a warning of toxicity to species that might otherwise predate the frog. Toxins are secreted from the skin, including tetrodotoxin – a potent neurotoxin common within a variety of other amphibians and marine taxa. Golden frogs also secrete a toxin unique to the species: aptly named, zetekitoxins are extremely toxic, and have earned A. zeteki the title of the most poisonous species within the genus.

The health and relative abundance of amphibian populations have often been used as an indicator of ecosystem health, particularly in locations with bodies of water. This is because amphibians, namely stream-dwelling frogs like A. zeteki, usually exist in relatively stable populations, are philopatric and generally have a long lifespan.

Extrinsic factors that have had a detrimental impact on ecosystems surrounding these populations are therefore more visible to conservationists than fluctuations in the relative abundance of fish and freshwater invertebrates. If the water quality of a location is insufficient, amphibians may be the first to know about it, but they certainly won’t be the only species to suffer.

No match for the rapid expansion of human populations and the subsequent clearing of local forests for infrastructure development, the golden frog’s potent toxicity did not stop numbers of the species from depleting rapidly following the construction of the Panama Canal in 1914. Although hailed as one of the greatest developments of the 20th century economically, the subsequent industrialisation and clearing of forests led to once-pristine waterways becoming contaminated, uninhabitable, and in many cases gone altogether.

A. zeteki, relying heavily on these waterways for both breeding and larval development, were no longer able to thrive in these locations as they once did.

In 1966, Panama’s first national park, Parque Nacional Altos de Campana, was created to protect habitat and reduce the rising number of animals being illegally poached and trafficked outside of Panama. Since this time, a further 75 protected areas including 13 national parks have been opened covering nearly 30% of Panama’s total land mass. Whilst successful in providing a refuge for A. zeteki from human activity and returning clean waterways required for successful breeding, national parks are unable to prevent disease from spreading, and the rise of Chytridiomycosis in these areas proved this to be true.

Chytridiomycosis is an infectious disease caused by the chytrid fungus Batrachochytrium dendrobatidis (Bd), affecting only amphibians. It is 100% fatal in many species and has largely impacted anurans; in the late 1980s, it was found to be the primary cause of the extinction of the golden toad (

By 2004, it had caused the once well-known, abundant population of golden frogs in El Copé, western-central Panama, to become locally extinct in just a few short months. By 2014, some of the country’s easternmost forests were impacted; chytrid fungus has successfully found its way across the entire length of the country.

Captive Population: Ready When You Are

In 2000, before the widespread demise of the species due to chytrid fungus, the Baltimore Zoo in Maryland, USA began a captive breeding program of the species; this would be the first of several North American zoos to assist in captive breeding programs for A. Zeteki. The success of this breeding program is evident, as this population has now grown to over 1000 adult individuals, all of which are found in numerous institutions across North America. An ex-situ population has also been set up in El Valle Amphibian Conservation Centre (EVACC) within the El Nispero Zoo, Panama, managed by Smithsonian, which has also had success with breeding.

The re-introduction of the golden frog into former habitats may be a long way off: EVACC state on their website that continuing changes to land use across the country as well as the ongoing chytrid fungus epidemic are two significant issues which will need to be overcome before reintroduction can occur.

However, by maintaining genetic diversity through the use of breeding programs globally, if a time ever comes where A. zeteki can be introduced into the wild, a stable, healthy population of breeding adults will be ready and waiting.