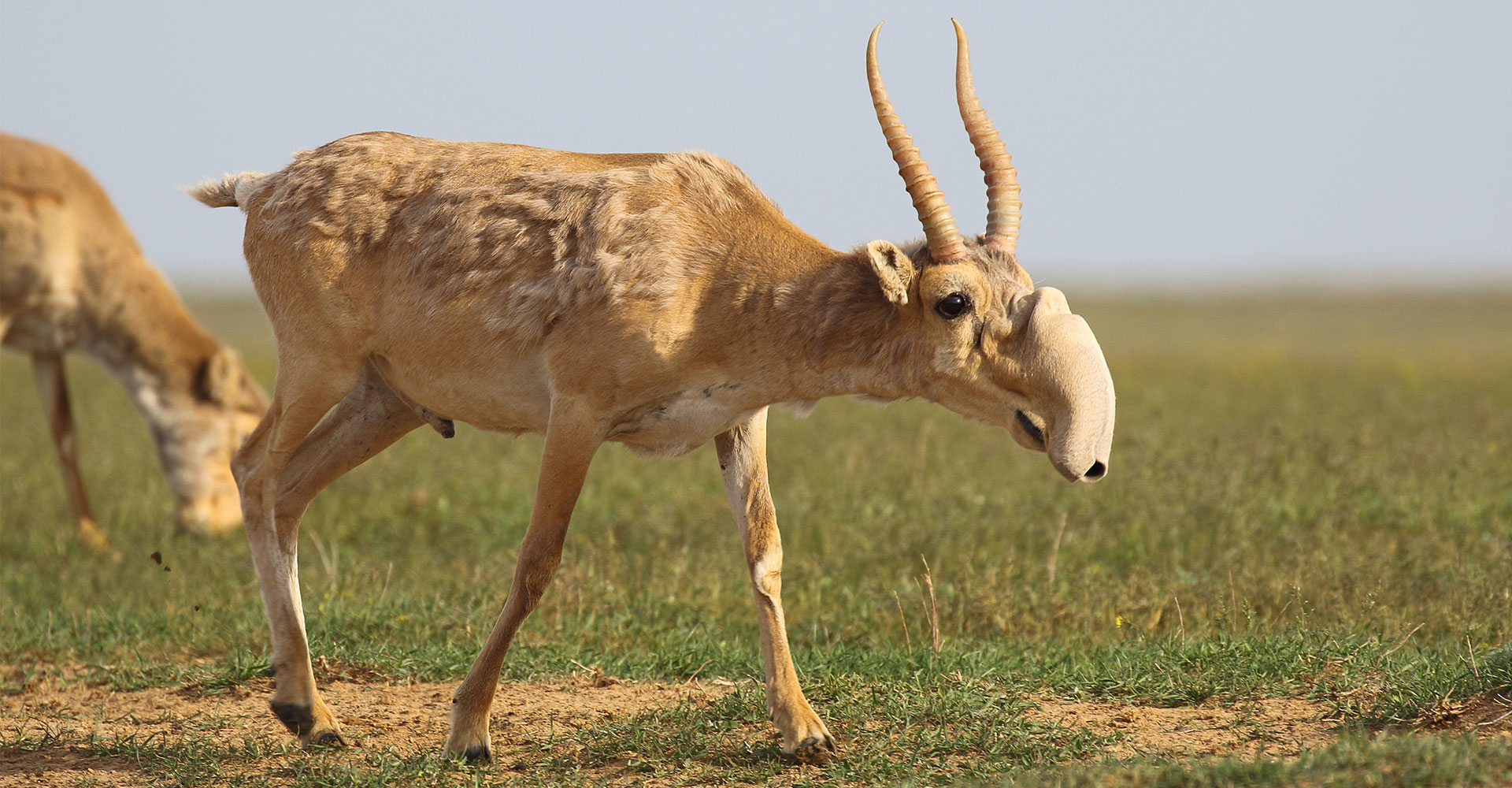 The saiga is an unusual antelope many readers will not have heard of before. However, they came to public attention in 2015 when a mysterious outbreak of disease led to the deaths of more than 200,000 saigas gathered for breeding in Kazakhstan.

The saiga (Saiga tatarica) is a medium-sized antelope, about the size of a goat, with long legs and an unusual fleshy nose. Their nose is designed to help them warm cold air in the winter and filter out dust in summer. The saiga is a harem breeding species with males protecting up to 30 females at once to breed with. There is sexual dimorphism, where males are larger than females and have horns. The male saigas use their noses to produce loud ‘roars’ during the mating season. The pitch of the call indicates the size of the male, with males who produce lower pitched calls appearing bigger and attracting larger harems.

The saiga lives in a very harsh environment, reaching extremes of temperature in both summer and winter. Saigas follow a large migration route between the seasons in order to reach food sources and breeding grounds. They are usually found in herds of 30 to 40, but gather in their thousands for migration and breeding events.

The saiga is an ancient species once roaming across Europe and North America with prehistoric creatures like the mammoth and sabre-toothed tiger. Its range is now restricted to isolated populations in Kazakhstan and surrounding nations including Russia (sub-species S. tatarica tatarica). A very small population remains in Mongolia. The Mongolian population is currently the most threatened, and is a unique sub-species of saiga (S. tatarica mongolica), supported by mitochondrial DNA analysis (Kholodova et al. 2006). The saiga, as a whole, is currently listed as critically endangered by the IUCN after a 95% population crash in only 15 years.

This drastic population crash has brought up some concerning genetic issues. There has been significant genetic diversity loss within the saiga population through the Pleistocene and Holocene to the current age (Campos et al. 2010). The study by Campos et al. does highlight, however, that saigas have recovered from population crashes in the past. The loss of mitochondrial genetic diversity in ancient times suggested a population size reduction of 66-77%. The saiga populations managed to recover from this to an extent, so we know it can be done.

In 1981, the saiga population was as large as 1,250,000. The collapse of the Soviet Union severely affected the saigas as policing and management decreased. Poverty in rural areas increased at the same time as the popularity of saiga horn for ‘medicine’ increased. Poaching for horns and hunting for meat negatively affected the populations and they again dropped significantly. In 2004, data collected from a number of groups put the population at only 48,300. A decade later, the saiga populations reached a high of 295,470 (Kazakhstan Government statistics) before the May/June die off.

In May and June of 2015, the Betpak-dala saiga population in Kazakhstan suffered from an infection of the bacterium Pasteurella multocida. This caused haemorrhagic septicaemia, leading to the deaths of over 200,000 adult saigas.

Researchers examining the case had seen Pasteurella infections before, but none led to a level of mortality as high as in the case of the saigas. The researchers have not been able to find any additional signs of illness in the saiga, but it is possible an underlying cause or environmental trigger may have been at play to exacerbate the loss of life.

Professor EJ Milner-Gulland of the Saiga Conservation Alliance says that short-term temperature and humidity anomalies are likely to have contributed to the disease outbreak. This suggests that the saigas are particularly vulnerable in a changing and warming climate into the future. The saiga was highlighted as a conservation success due to its recovery from a low of less than 50,000 animals in the early 2000s to just greater than 300,000 in 2015. However, Professor Milner-Gulland cautions calling the saiga a success story too quickly due to the challenges the species faces in recovering from the 2015 die off.

She is confident that the Betpak-dala population will recover, but is worried about some other saiga populations where poaching is still a big issue. As the male saigas are the only sex with horns, poaching disproportionately affects them. The effect is of interest as the saiga is polygynous, meaning one male inseminates several females. Therefore, the number of males is not usually a limiting factor in fecundity. But given how dramatic the decline in the number of males was, reproductive collapse began to occur (Milner-Gulland et al. 2003).

Along with poaching and hunting, the saigas face threats from oil and gas exploration, as well as new infrastructure programs hindering their migration. The saiga populations in Kazakhstan are at particular risk from infrastructure blocking their migration routes. Professor Milner-Gulland highlighted a border fence between Uzbekistan and Kazakhstan built in 2012. This fence cut a population of saigas off from their winter grounds in Uzbekistan.

Monitoring saiga populations can prove quite difficult as they are remote and sometimes hard to find. The saigas themselves can run at up to 80 kilometres per hour, so they are hard to catch for monitoring. The Association for the Conservation of Biodiversity in Kazakhstan works with several groups of researchers and has identified the most effective way to catch and collar a saiga is to trap it with a net. The saiga is caught, collared and released with minimal harm within a few minutes. The GPS collar allows the saiga to be tracked so the researchers can monitor the populations throughout the year.

Usually, communities are quite happy to be involved with work to help preserve the saiga and participatory monitoring programs are in place. Participatory monitoring involves the community in some of the research being conducted. Local people are encouraged to record saiga sightings when they are out working on the steppes and report these sightings to the Saiga Conservation Alliance. This is helping the researchers build a strong database about saiga populations across broader areas.

The Saiga Conservation Alliance also runs programs for women. Local women are employed to make crafts like coin purses and pencil cases, using their traditional embroidery designs. These crafts are sold by the Saiga Conservation Alliance and an income is provided to the women. This helps them to support their families and reduces the likelihood the families will resort to poaching or hunting saiga to survive. Initiatives like this have also been shown to increase a community’s respect for the animal, as they understand that the animal is providing them with an income.

There is some optimism about the saiga, with modest population recovery across its range. Professor Milner-Gulland is confident that community projects are helping change attitudes and support families. Although there are challenges with funding and access to resources, the saiga populations are in good hands and we hope to see population increases into the future. Readers can learn more about the saiga and its conservation at saiga-conservation.org and purchase local crafts to support saiga conservation and local women.

Captions and Credits for Images:
All images were taken at Stepnoy Sanctuary – Learn more here – by Andrey Giljov and Karina Karenina. All Rights Reserved.