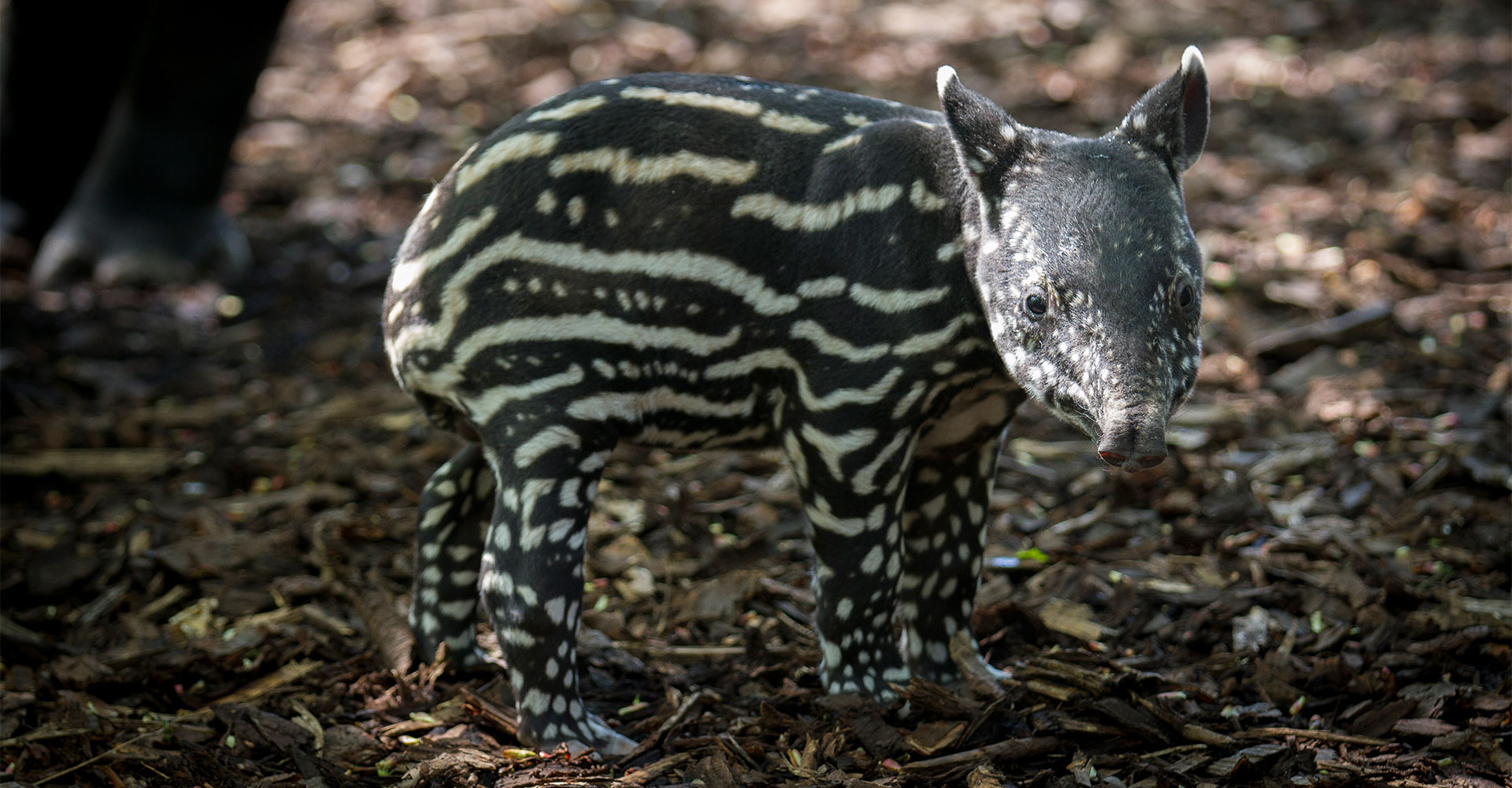 About the Malayan Tapir

Spread throughout the tropical lowland rainforests of Southeast Asia, the Malayan tapir (Tapirus Indicus) spends most of its life hidden away in the forest’s dark undergrowth. A deeply shy animal, the tapir strives to avoid all contact with humans and is rarely seen by the local population.

In evolutionary terms, Tapirs have stayed relatively the same for the past 35 million years. They have four toes on each front foot and three toes on each back foot, meaning that they are classed as odd-toed ungulates – a category that include horses, donkeys, zebras and rhinoceroses.

Covered in short black fur, a white saddle spreads across their back. This odd colouring provides camouflage for the species. The dark fur blends into the dim light of the forest and the white saddle breaks the outline of the tapir’s body in the forest undergrowth, the disrupted colouration making it harder for predators to recognise the prey and rendering them practically invisible. Due to it’s large size, the tapir does not have many natural predators, however when threatened or frightened the species is very fast despite its large size and can defend itself with strong jaws and sharp teeth.

The Malayan tapir has one prominent distinctive feature: a long, fleshy prehensile nose. This proboscis acts almost like an elephant’s trunk, stripping leaves from vegetation and feeding them into its mouth. The long nose also provides the species with an excellent sense of smell – a sense that the tapir relies on greatly due to their very poor eyesight.

With tiny, brown beady eyes placed on the side of their head, tapirs often suffer from corneal cloudiness, which creates a blue haze over the iris and leads to vision loss. Their sense of smell and keen hearing are what keeps the tapir alert.

Malayan tapirs are usually quite solitary creatures, patrolling large overlapping territories (around 12 square kms) and claiming their areas by spraying urine on trees and other vegetation. Their habitat is tropical lowland forest, ideally near water as the species spend a lot of their time bathing and swimming. It is a crepuscular forager, meaning it forages at dusk and in the twilight hours. Exclusively herbivorous, the species uses its keen sense of smell to forage for a wide variety of twigs, saplings, fruits and leaves from the understory vegetation. The odd-nosed creatures are not picky and have been recorded to eat over 380 species of plant.

During breeding season the tapirs are more likely to come together in groups. Females give birth to one calf after an 11-13 month gestation period, and stay with the calf for two years until they reach maturity. Like the adults, the infants are born with a coat perfect for camouflage, with a reddish-brown colour patterned with white stripes and spots. This way, the juveniles blend perfectly into the vegetation. The coats change to the adult pattern at around seven months after birth as the species matures.

The Malayan tapir is currently classified by the IUCN as Endangered. This classification is mainly due to ongoing population decline from habitat loss, habitat fragmentation and increased adult death from hunting, roadkills and bi-catches from snare hunters.

Most of the remaining Malayan tapirs can be found in three distinct sub-populations:

Although all three areas have established protected areas and reserves, the three sub-populations are becoming more and more isolated and fragmented due to human activity. In Sumatra it has been estimated that there has been a 40% decline in forest cover over the past 15 years, and at the current rate of decline all forest outside conservation areas will be lost over the next few decades.

As the majority of the Sumatran Malayan tapir population lived outside the protected areas, this has hugely affected the species viable habitat. South Thailand and Malaysia are facing similar issues with deforestation as huge areas of forest are cleared and converted to palm oil plantations, and in Thailand-Myanmar the species has an uncertain future due to forest clearance for expanding rubber and palm oil plantations.

The lost of viable habitat is already having a devastating effect on the Malayan tapir. It is estimated that there has been a 50% population loss in the past three generations and that there are less than 2,500 mature individuals remaining. The fragmentation of habitat also puts the species at great risk of inbreeding.

Tapir’s are naturally shy animals, and are seemingly highly sensitive to forest fragmentation. Halabala Wildlife Sanctuary, on the Thai-Malaysia border (Kaewsirisuk et al, 2001) found that the species would avoid forest plantation edges by a few hundred meters. This means that forest fragmentation greatly decreases the chance of tapirs genetically exchanging with those out of their surrounding habitat, leading to isolation and inbreeding.

In the past, hunting was a relatively minor threat to the species. Tapir meat was not popular and was a rare sight in local markets. The meat was avoided by the large Muslim populations due to the species resemblance to pigs and some of the local tribes believed that killing a tapir brought bad luck. However, as the human populations expanded, the more popular prey species became depleted and the hunters began to turn to the tapirs as a source of food.

Hunting, though, is not the only human interaction causing issues: it has been reported in Sumatra that several tapirs have been found to be illegally captured for private zoos, and many tapirs have lost their lives due to traffic and road accidents. Due to their low reproductive rates, the removal of a healthy adult tapir can be devastating for tapir population numbers.

As with so many animals, human impact is putting this species at risk.

So what is being done to conserve this species and combat habitat loss? We spoke to tapir keepers from the Royal Zoological Society of Scotland (RZSS) to find out more about this reclusive species, and what can be done to save their population.

These protected areas and reserves will help to stem population decline from road accidents and hunting. In 2002 the Department of Wildlife and National Parks Malaysia (DWNP) was set the objective of developing a Malayan tapir conservation action plan. The group went on to set up a Malayan Tapir Conservation Centre that provides refuge for displaced tapirs, as well as studying and breeding captive tapirs to become a reference centre for Malay tapir breeding programmes all over the world. Indonesia developed a National Tapir Conservation Action Plan in 2013 and, in 2014, Malaysia began the process of developing a National Tapir Conservation Action Plan as well.

The RZSS spokesperson emphasised just how important these protected areas are, particularly as Tapirs are not the only species at risk due to human activity.

In ex situ conservation, RZSS alongside several other European zoological societies are currently playing a large role in Malayan tapir conservation by contributing to captive breeding programmes. The RZSS uses animal husbandry techniques to play an active part in the European Endangered Species Programme (EEP) and the European Studbooks (ESB). RZSS Edinburgh Zoo has successfully bred many tapir calves in the past few years, which have gone onto breed with other captive zoological collections, increasing the captive population and keeping a high level of genetic diversity. It is hoped that, in a worst-case scenario for this species in the wild, successful reintroductions could occur.

In regards to the future, research and conservation is crucial added RZSS:

“Current research and conservation should continue on this species by investigating the status of the population and management plans. Tapirs play an important role maintaining and shaping the diversity of forest ecosystems, by dispersing seeds and recycling nutrients. The loss of tapirs could trigger adverse effects in the environment, disrupting key ecological processes.“

Unlike many endangered species, the government bodies of the habitats they live in have recognized the importance of these creatures. The establishment of national parks, protected areas and actions programmes means that these species stand a fighting chance to rebuild among the changing world around them.

Related Topics:AsiaEleanor Bickerton
Up Next