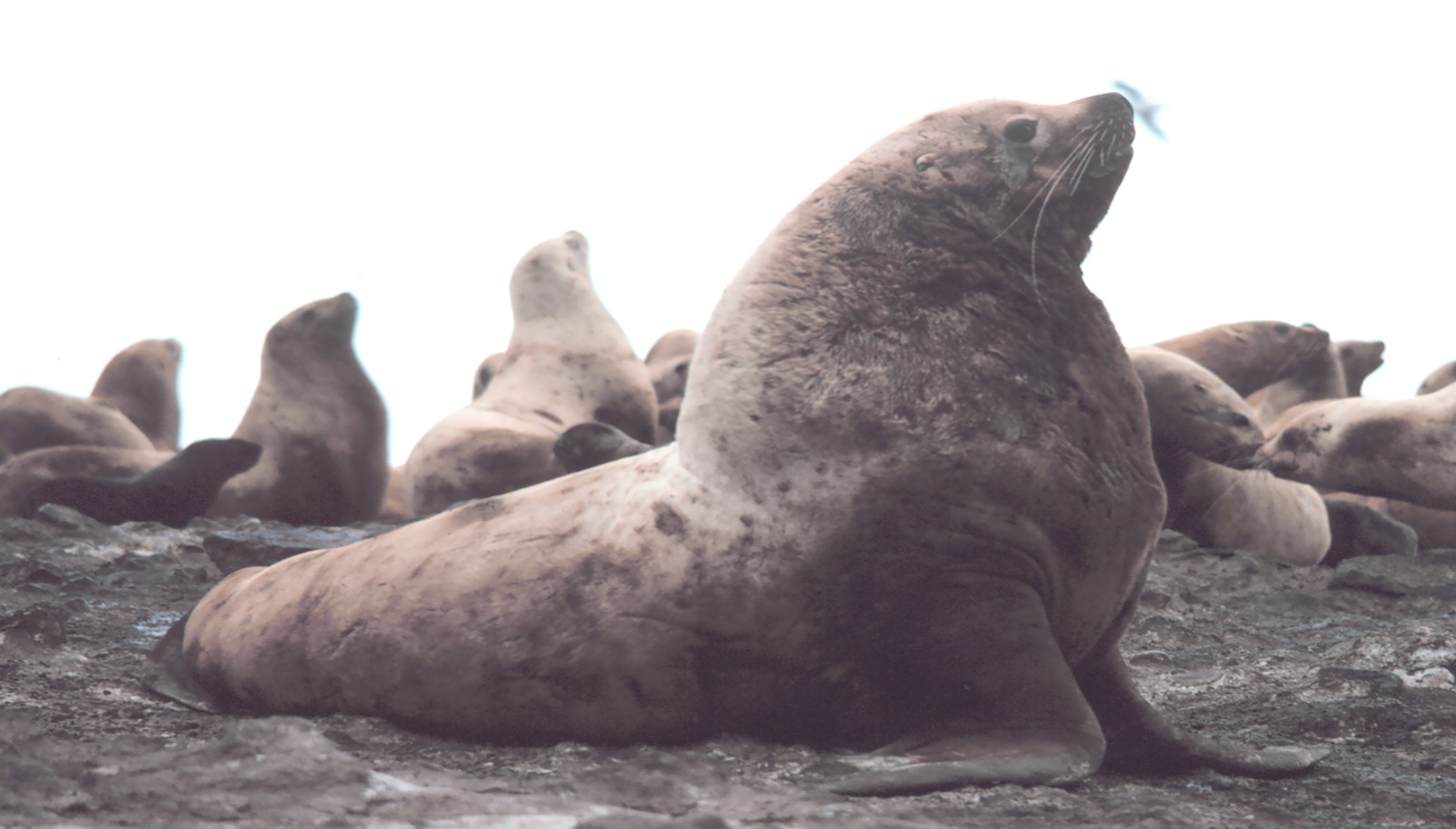 The beach is littered with giants, grumbling, roaring and sizing up their competitors in an effort to secure the best spot. It’s mating season at the Steller sea lion rookery.

*Population decline refers to the Western subspecies. When both subspecies are considered, this is 13%.

The Steller sea lion (Eumetopias jubatus) is found on rocky beaches from the northern Californian coast to Alaska and across the Bering straits to the coasts of Japan and Russia. As social creatures, they spend their days in groups, diving for prey, foraging for food and resting on rookeries and secluded rocky islands known as haulouts.

The Steller sea lion actually has two recognised subspecies: the Western Steller Sea Lion and the the Loughlin’s Steller Sea Lion. Both subspecies are opportunistic and skilled hunters. Usually aggregating in areas of high prey abundance and feeding on a wide range of fish including herring, walleye Pollock, pacific cod and cephalopods such as squid and octopus. They have also been known to kill and eat young northern fur seals at the Pribilof Islands, as well as Harbor and Ringed Seals. An adult needs to eat 5-6% of its body weight a day, whilst pups and juveniles need twice that amount so they spend a large proportion of their time hunting and feeding in groups at night.

Stellar sea lions are the largest of the otariidae family (eared seals) which contains all fur seals and sea lions. The males of the species are giants, growing up to 3.3m long and averaging 1,000KG in weight. Sexual dimorphism is prevalent in the species: males have a huge neck and thick, broad-set shoulders supporting a long coarse mane. They can be up 2.5X the size of the female and can grow 20-25% longer. Females do not tend to get larger than 2.5m, with a weight averaging around 273kg.

The Life of a Steller Sea Lion

Males and females reach sexual maturity between the ages of three and seven years old. When they are ready to breed, they return as adults to their natal colonies, making a pilgrimage to the huge and crowded rookeries in which they were born.

Males arrive early to the breeding site, to establish territory. Steller sea lions are a polygynous species, meaning that dominant males will defend and mate with multiple females. Although males mature early, they often are not successful until they are over the age of nine, mature and strong enough to stake a territory. This can be a gruelling process and males use their huge size to intimidate others and secure their spot. The high effort of winning and maintaining territory on the crowded beaches means that many males do not feed throughout the 60-day mating season, so as not to lose their hard fought position.

After territory has been established, females arrive mid-May to June to mate, producing a single pup conceived the prior year. Four days after birth the female is ready to mate again, although the fertilised egg will not be planted until around October.

Pups are substantial in size, weighing 18-22kg. When they are born they have thick blackish fur which is moulted before six months. Just over a week after giving birth, the female will begin to forage in the ocean again, leaving the pup in the safety of the rookery. Pups are weaned at one year of age, but females have been known to suckle their young for up to two to three years.

Steller sea lions suffered a huge population loss in the 1960s. The cause is still a mystery.

Overall, the Western subspecies experienced a 50% population loss over the last three generations. This drastic loss would normally mean the species would be labelled as “endangered” by the IUCN. However, Loughlin’s Steller Sea Lion population has increased steadily since 1979, growth has been substantial and the population size is projected to be 243% larger in 2015 than in 1985. When the two subspecies are considered together, the overall decline is shifted to 13% over the last three generations, leading the IUCN to award the species a “Near threatened” status.

To shed some light on the population decline, we spoke to Steller sea lion expert John M. Maniscalco, Ph.D.

John, a Research Associate at the Alaska SeaLife Center, has spent many years researching the species, studying the behaviour and population dynamics of Steller sea lions and nesting seabirds.

“The definite causes of this decline are still unknown, [but] it has been hypothesised that this loss could be due to a number of factors including pollution, parasites, disease, rookery disturbance and increased predation by killer whales.”

Humans have played a large part in the population decline due to a mass culling in the early 1960s when commercial fisheries saw the species as a direct threat to the fish market.

“Between the 1960s and early 1970s, biologists and bounty hunters killed most pups on some of their rookeries, and animals of all ages in many locations because it was thought they were taking too many of our commercially harvested fishes. Thousands of additional mortalities continued through the 1980s due to conflicts with fisheries that were expanding quickly in the Gulf of Alaska and Bering Sea,” says John.

Steller sea lions were hunted on rookeries, shot by fisherman or trapped in nets. This has a large impact on the population as it wiped out many of the next generation. The population that was left may have found it difficult to compete or find food due to the massive fish removals by humans.

“In a nutshell, it is believed that mammal-eating killer whales fed to a large extent on several species of large whales but when most of this great whale biomass was removed by humans after WWII, the killer whales had to shift to feeding on smaller animals such as seals and sea lions,” explains John.

The increase in predations now means the killer whales are the primary predators of Steller sea lions (Loughlin 2009).

Another popular theory is the “Junk Food Hypothesis”.

Warming ocean temperatures in the 1970-80s led to a major shift in the relative abundance of certain fishes in the Gulf of Alaska and northeast Pacific. Fat-rich fish stocks such as herring and capelin decreased, whilst lower fat fishes such as cod and Pollock became more abundant.

Some researchers believe that the low-fat and low diversity diet could have caused the sea lion population to become malnourished and “energetically compromised.” This loss of condition can result in reduced pregnancy rates and increased susceptibility to disease or predation.

However, John does not agree with this hypothesis.

“Personally, I don’t much buy into this latter theory because Steller sea lions are very much generalist predators that can take advantage of most any available food resource, and studies here at the Alaska SeaLife Center indicated that they grow and gain weight very well on low fat diets.”

The Future for Steller Sea Lions

So how does the future of the species look?

Steps have been made to protect the remaining population and stem the decline of the western Steller Sea Lion. A number of boards including the United States National Marine Fisheries Service (NOAA) has established protective measures relating to fishing bans around major rookeries and feeding areas.

John notes that this may already be having a positive effect on the species: “Between the eastern Aleutian Islands and the eastern Gulf of Alaska, the Steller sea lion population has been rebounding strongly since about 2000. ESA-related regulations, fishing restrictions and greater awareness are likely contributors to the increasing numbers.”

However, farther west around the central and western Aleutians, the population continues to decline. For the rest of the species, research will be the key to their survival.

“It is not possible to say what conservation efforts are needed to reduce the population decline in that region because we still do not have a good handle on why the animals out there are doing so poorly.”

A number of North Pacific Universities and biologists are conducting work to try and figure out the causes of the perplexing population decline. Only once these causes are understood can effective conservation tactics be fully applied. This research could also provide vital understanding of the complex marine ecosystem and the effects of fish stock changes (by both natural and man-made causes) on other marine mammals and sea birds.

John adds: “What would be most helpful is better funding for these research efforts. Yet, funding for such critical research is looking quite grim under the current administration.”

Overall, the species stands a good chance at recovering, and John feels optimistic about the future.

“Their numbers are rebounding well across most of their range. They are very tough animals that seem to recover well when given the space and respect they need and deserve.”