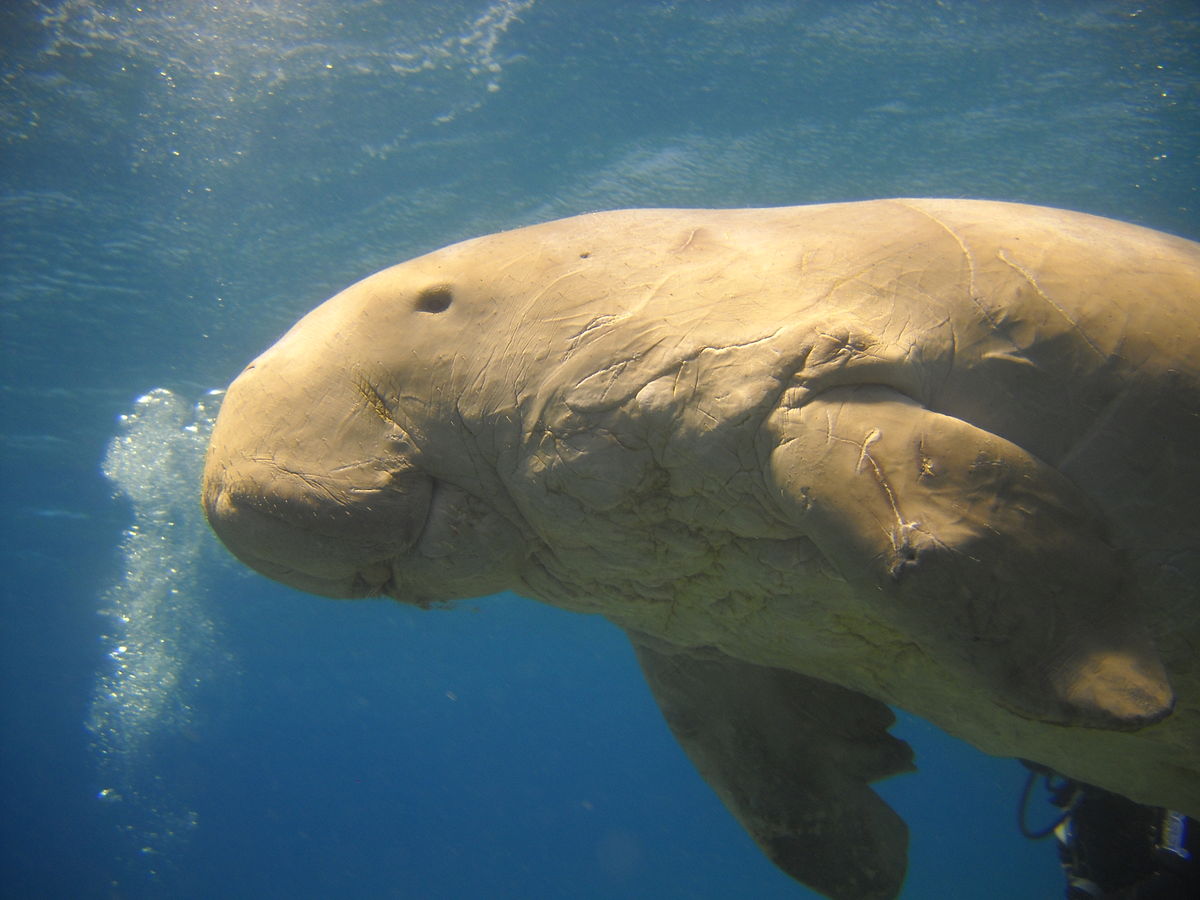 The dugong (Dugong dugon) exists as the only known herbivorous marine mammal and is listed by the International Union for Conservation of Nature (IUCN) as being vulnerable to extinction due to human activities and hunting. This creature can support a weight of 400kg, reach lengths of up to five metres, and is able to sustain life on earth for up to 70 years. Colouration in mature dugongs can be seen as a light brown, whereas calves are found to be more of a pale shade.

Their body is barrel-shaped with a flattened fluke-like tail, similar to that of a whale or dolphin. They possess a large mouth in which the upper lip is covered with bristles that allow the dugong to feel for seagrass in brackish waters. Dugongs can remain underwater for up to 12 minutes before surfacing for oxygen. Their nostrils contain valves centred towards the front of their head that flip shut during diving. This enables them to remain almost completely submerged whilst surfacing for oxygen.

Tusks are present in all dugongs, however, besides sometimes noticeable on aged females, they are only visually predominant in mature males. Apart from sexual reproductive glands, there are no other external physical differences in the sexes as they are a monomorphic species.

Dugongs possess a rather large and rounded snout that ends in a cleft. This attribute is ideal for a bottom feeder as its muscular structure enables them to efficiently forage the sea floor and uproot seagrass. They feed in shallow waters of one to five meters in depth but have been observed diving as deep as 39 meters to source food.

Dugongs feed on an exclusive diet of seagrass which they are able to consume up to 40kg of each day in order to maintain their body weight. Due to the quantities of seagrass this species consumes, not all seagrass meadows make for an ideal habitat, being unable to regrow quickly enough to sustain these mammals over an extended period of time. Their two front flippers are used to tread across the sea floor as they graze upon meadows, uprooting entire plants. This leaves behind them a distinct feeding trail that can stretch for up to eight metres.

As a result of the dugong having relatively small molars that are soft and become largely non-functional as they age, dugongs rely on large internal mouth pads to ingest their food. Species of seagrass that are low in fibre and rich in nitrogen are a preferred source because they break up easily as they are pulled into the mouth.

The only other known species to exist in the Dugongidae family was Hydrodamalis gigas – hunted to extinction in 1767, just 36 years after first being discovered. Today, the only other species to exist in the same order (Sirenia) as the dugong is the manatee. Many mistake the dugong for a manatee, however there are a few defining characteristics that set them apart. The primary marker is the presence of nails on the two front flippers of the manatee, a remnant of the marine mammal’s ancestral history of terrestrial life.

Although dugongs may display physical characteristics that are similar to that of whales and dolphins, their DNA indicates that they are more closely related to elephants.

Dugongs are a social species that may be found in pairs, or in groups of up to 200. However, although groups of 200 have been observed, this does not occur often due to the problem of seagrass regeneration mentioned above.

Vocalisation and visual communication are the two primary methods used to communicate with one another. Vocalisation comes in the form of chirps, whistles, and barks which echo through the ocean. Each sound has its own amplitude and frequency that characterises the signal. As dugongs have poor eyesight, vocalisation is their primary means of communication. However, when in close range to one another, dugongs may communicate using visual cues. This species is also known to utilise it’s sense of smell in locating new feeding grounds. Migration is driven by a lack of food source in this semi-nomadic species. Being able to migrate long distances in search of sustainable habitats means that a proper space can be found. Once that’s achieved, a dugong may spend the majority of its life at the site so long as it is able to provide.

Mating occurs at different times depending on location, and females are known to mate with several males during this period. This mating behaviour classes dugongs as a polyandrous species. Females will reach sexual maturity at six years, and produce their first offspring between six and 17 years. Males, meanwhile, reach sexual maturity anywhere from six to 12 years.

Behaviour during mating is slightly varied depending on location. In some instances, male dugongs are known to take part in aggressive battles in order to prove dominance. Due to these battles, it is common for male dugongs to be quite heavily scarred. Female dugongs also carry scars, most often received during mating practices.

Alternatively, in some parts of the world such as South Cove in Western Australia, dugongs display mating behaviours similar to that of lekking. A lek refers to a traditional area where the males of a species gather to take part in competitive activities, and display their dominance in order to attract a female.

The reproduction rate of this species is relatively low, as females are only known to produce one offspring every 2.5 to seven years. The gestation period of a female dugong is between 13 and 15 months. At birth, calves can weigh 30kg on average, and are roughly 1.2 meters in length. Females carry mammary glands under their fins, from which the calves suckle upon.

The first 1.5 years of a calve’s life is spent with the mother, learning to efficiently graze through seagrass meadows. Calves are vulnerable to predation at this age. Thus, they never stray too far from the side of their mother, who can often be seen carrying the calf on her back. The next four or so years are spent bonding. During this period it is common for mother and calf to display signs of affection towards each other, which includes nose touching. At six years of age, the calf will have reached maturity, and will leave the mother’s side to begin its journey in search of a mate.

Mature dugongs have few natural predators due to their large size, dense bone structure, and tough skin. One defence mechanism of the dugong is that their blood tends to clot rapidly when wounded. This is ideal for recovery after an attack by another male, or a predator.

Dugongs are now known to be extinct in the waters surrounding the Maldives, the Lakshadweep Islands, the Mascarene Islands, and Taiwan.

This species does not adapt well to captivity, in large part due to their specialised diet. Seagrass species that are preferred by the dugongs are not able to be grown in captivity effectively, and is quite expensive to source in suitably large quantities.

As dugongs need to surface approximately every 12 minutes for oxygen, they are susceptible to being struck by boats travelling at fast speeds, or travelling in shallows that are home to seagrass. They are also subject to drowning due to entanglement in commercial fishing nets. In most cases, they are either eaten or sold for their meat.

Most of the capture and trade of this species is practised illegally. It has been reported that between the years of 2005 and 2010, 56 dugongs were captured by commercial fishing nets. 51 of these were known to have still been alive, however all but one were killed and sold.

Despite this, the largest threat to dugong populations remains the decline in seagrass habitats.

It is believed that 29% of the worlds seagrass habitats have already been lost.

The main cause of this loss is human activity. This includes unsustainable urban and industrial coastal development, and fishing methods including trawling, use of explosives, and use of chemicals.

Pollution in coastal waters from inadequate treatment of domestic sewage, untreated industrial liquids, solid waste disposals, and run-off caused by deforestation and industrial and property development all also contribute to the decline in the food source.

Climate change exacerbates the effects of the human impact, with cyclones, storm surges and tsunamis wreaking further havoc. Seagrass can be ripped from its holdings due to excessive wave action.

Combining all these factors together, it is estimated that seagrass meadows are disappearing at a rate of 110 square kilometres per year. This places seagrass meadows among the most threatened ecosystems on earth.

The Importance of Seagrass

Seagrass plays an important role in carbon storage, accounting for 10% of the annual carbon sink capacity of the ocean. They also provide a habitat and feeding ground for many marine species including shrimp, shellfish, and finfish which many people around the world depend on for their livelihood.

In 2007 the United Nations Environment Programme initiated a global conservation agreement in response to the alarming decline of dugongs and seagrass habitats. The Memorandum of Understanding on the conservation and management of dugongs and their habitats throughout their range, under the auspice of the convention of migratory species of wild animals, is viewed by all signatory states as a crucial mechanism to preserve this species. With support from the government of the United Arab Emirates through the Environment Agency – Abu Dhabi, a secretariat was created to support dugong range nations.

Most recently, The Dugong and Seagrass Conservation Project was launched with the aim of stopping the loss of dugongs and seagrass habitats across the Indian and Pacific Ocean basins. This project spans across Indonesia, Madagascar, Malaysia, Mozambique, Sri Lanka, the Solomon Islands, Timor-Leste and Vanuatu, and is run through some 38 national projects.

This program will enhance the effectiveness of conservation efforts through means of community-based management at key dugong sites. The project also offers incentives for change in fishery practices to more sustainable methods, and provides solutions to diversify income sources.

Australia is home to the largest proportion of the total species’ population. Currently, the dugong populations surrounding the Great Barrier Reef world heritage area are in decline due to poor water quality. However, in areas such as the northern third of the Great Barrier Reef (near Cooktown, Harvey Bay, and Morton Bay) and the waters surrounding the Torres Strait Islands, dugong populations are believed to be stable.

The Torres Strait Islands are host to one of the world’s largest dugong populations. The indigenous inhabitants of this land practice sustainable hunting techniques of dugongs. Aboriginal and Torres Strait Island communities have lived along the east coast of Queensland for more than 600,000 years, and consider the Great Barrier Reef their ‘Sea Country’.

The activities associated with the hunting of dugongs, and the preparation and sharing of the meat, has great significance and is an expression of their long continuance of cultural tradition. Dugongs have a high social and economic value due to the nourishing diet they provide for communities, where nourishment is often too expensive to attain.

Traditional land owners are working in partnership with government agencies to conserve and protect the dugong species and their habitats by documenting their aspirations and future plans for their Sea Country management.