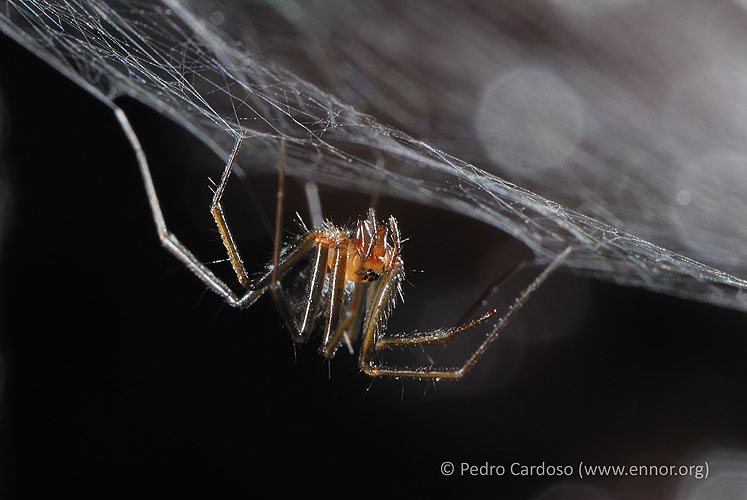 About the Terceira Island Spider

Let’s begin with a disclaimer: The term ‘Terceira Island Spider’ is not a recognised common name for this species, and is perhaps unfair to use considering that at least 122 species of spider are known to exist in the Azores in which this island lies. So little is known about this rare arachnid however that documentation primarily uses its taxonomic designation of Turinyphia cavernicola (Wunderlich 2008), although an accepted vernacular term does appear to be ‘Algar do Carvão cave spider’.

Almost halfway between Portugal and Nova Scotia lies the Azores, made up of a number of small islands. Scientists discovered an arachnid there that lives solely in the tunnels created by the volcanic lava that flowed through the cave system of one specific island – Terceira – and one cave in particular – Algar do Carvão. Extensive searching for other occurrences returned just two more locations, according to researchers: Gruta da Malha and Furna de Santa Maria (Pereira, F et al. 2015).

With a total body size not exceeding 2mm, this pale and large-eyed species had managed to avoid in-depth study for years, but it’s unveiling as endemic to the islands indicates that more species are yet to be discovered (Lissner, J & Borges, P 2011). It is a specialised troglobite, meaning that it is so well adapted to life in a cave that it is unlikely to survive should it be moved above-ground.

One way in which this is interesting in the case of this arachnid is that an element common to the physiology of troglobites is blindness. There is, therefore, a case to be answered as to why this species has such large eyes (in the case of the male, at least).

The spider operates off ‘sheet’ webs laid across crevices and holes in three humid caves or lava tubes, and it is the growing anthropogenic disturbance to these habitats that is causing major problems for their survival plight.

With an extent of occurrence (EOO) listed on its Species Conservation Profile in the Biodiversity Data Journal as 2km2, and an area of occupancy (AOO) of just one-third that size, the Algar do Carvão cave spider was added to the IUCN’s Red List as Critically Endangered in September 2016.

The possibility exists that at one point the species inhabited an area of some 70km2, meaning that the above statistics would represent a fall of 93%. Both the EOO and AOO are, therefore, listed as declining, and the report lists a few reasons as justification for this.

“In Terceira Island there are 15 well-surveyed caves and we found subpopulations in only three,” write the researchers. “The trend of decline is partly based on the assumption that this species can occur in all these caves and that the absence is due not only to biological reasons (type of cave; age of the lava flow) but mainly to anthropogenic disturbance on caves during the last 50 years.”

They go on to note that forest clearance (for cattle farming on the island) that removed plants that provided dense, humid coverings for the caves has promoted “changes in humidity and resource availability in [the] cave environment.”

On top of this, use of the land has introduced certain nutrients to the cave that could be harmful, and tourism increases add further stress to the environment. With all of this in mind – the declining AOO in particular – the trend inferred for the spider’s overall population is, of course, also a decline.

To support conservation of the Algar do Carvão cave spider, work is under way to increase protection of surrounding habitats and to erect fences around the few remaining places that this rare species still resides. But as with so many critically endangered species, it may be too little, too late.

The impact of human settlement in an area is long-lasting, often irreversible and unlikely to be halted – particularly for those species not in the charismatic megafauna category.