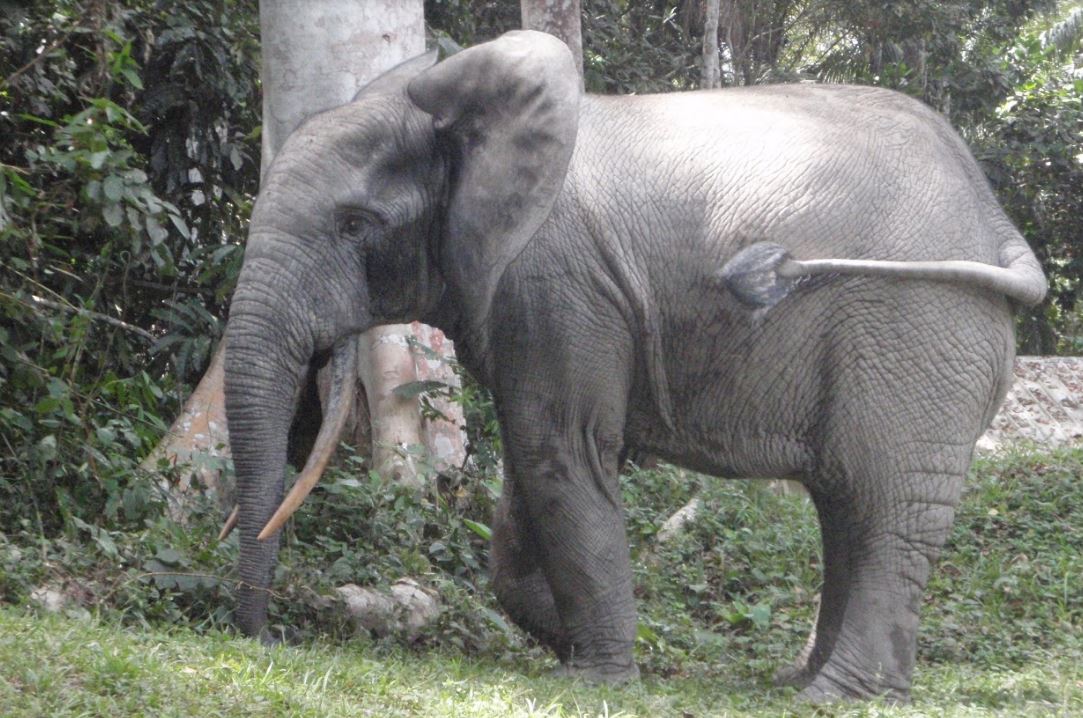 About the African Forest Elephant

Many readers will be familiar with the idea of one elephant species in Africa and one in Asia. However, this view has been challenged as more and more evidence points to the fact that the African forest elephant (Loxodonta cyclotis) is a separate species from the larger, more visible African savannah elephant (Loxodonta africana).

Not officially recognised by the IUCN as a separate species, little is known about the population size of the forest elephant. The IUCN cites the need for more extensive research by The African Elephant Specialist Group before re-classifying the elephants into two species. Also stated by the IUCN is the danger of premature classification; if the groups are re-classified too early, it is possible that the conservation status of savannah-forest elephant hybrids may be uncertain. One morphological difference is the shape of their heads: forest elephants have a slimmer skull and trunk than their savannah counterparts. Forest elephants are even smaller than their Asian cousins, but still have the trademark larger ears of African elephants.

DNA evidence suggests that forest elephants separated as a species from savannah elephants around 6 million years ago. This is the same period humans became a different species from chimpanzees. One of the main barriers for the scientists wishing to re-classify forest elephants is that they can still inter-breed with savannah elephants. Many biologists define a species as reproductively isolated from other species, which means that a group of animals cannot breed and have viable offspring with another group. Forest elephants and savannah elephants are not reproductively isolated because they can still have viable, healthy offspring. Hybridisation is not common, but it definitely happens in areas where the two elephant groups overlap.

Forest elephants live, as their name suggests, in the dense forests of Central Africa. This provides a conservation challenge due to the political instability in many of these nations, such as the volatile Democratic Republic of the Congo. Forest elephants need large areas of forest to support their family groups. The elephants often visit bais – mineral-rich clearings in the forest – in order to consume required nutrients like salts. The greatest concern for African forest elephants comes from poaching for their ivory. Some people do not know that elephants must be killed in order to obtain their ivory. In fact, in many cases, the elephant’s entire head is removed to get access to all the ivory. Ironically, many ivory trinkets are actually minute statues of elephants.

The Wildlife Conservation Society (WCS) works with local organisations to help manage national parks, work to protect elephant habitat, and continuously monitor elephant populations in many areas including the famous Dzanga Bai. The WCS works to ‘stop the killing’, ‘stop the trafficking’, and ‘stop the demand’. In doing this, they hope to reduce the number of forest elephants being poached for their ivory.

Dr Fiona Maisels, a conservation scientist with the WCS and a member of the African Elephant Specialist Group, is well placed to speak on forest elephants. One of the first things she emphasises is that forest elephants, if listed as a different species by the IUCN, would be critically endangered.

Dr Maisels explains that currently the IUCN only counts the total number of elephants in Africa and then studies their total decline.

“There are around 200,000 elephants in Botswana, roughly half of all elephants, under much less poaching pressure than in West, Central, or East Africa,” she says. “So as a whole, above all because of Botswana, decline is not too catastrophic if you count all African elephants as a single species.”

However, on average the forest elephant population is declining by 9% every year. The IUCN defines a species as Critically Endangered when “the population declines by 80% in three generations, or 10 years, whichever is the longer.” Dr Maisels estimates the elephant generation period at around 25 years. So, if forest elephants are declining at around 9% per year for 75 years, they are well past the percentage needed to put them into the Critically Endangered category. If decline continues at 9% per year, forest elephants could be as good as extinct in 10 years.

In just nine years between 2002 and 2011, Dr Maisels’ group noted a decline of 62% in the forest elephant population.

That’s an alarming figure for any animal, and most of this decline comes from poaching. Given there has been such a huge decline, other issues come into play, like the genetic quality of the population.

Dr Maisels mentions data collected by Hugo Jachmann in the period from 1969 to 1989, pointing to a significant increase in tuskless females in heavily poached savannah elephant populations in Zambia. It is quite likely this is also the case in forest elephant populations. She explains that the loss of the large males and females is not just a problem for the genetics of the population, there is also a “loss of knowledge of the geography of the area, (like) which waterholes have salt, where the best fruiting trees are, and so on, because the oldest females are the living libraries.”

Although deforestation is not yet a major issue for forest elephants, Dr Maisels says that timber harvesting can open up previously inaccessible areas to poaching. A journey that once would have taken days now takes but a few hours.

Dr Maisels cautions that, as more tracks are opened up, “unless (they are) strictly policed by anti-poaching staff, these roads become used by poachers, who can very rapidly access previously very remote areas with guns and munitions, and take out ivory (and bushmeat) just as quickly.”

She and her team have shown that in areas where forest roads are not well policed, the elephant populations decline rapidly. Dr Maisels suggests that if people want to do something about protecting forest elephants from poaching, they can raise awareness about the issues ivory poaching causes, helping to stop the demand. She says that in order to stop the trafficking, it’s important to avoid buying any ivory at all, and educate friends and family about the plight of the species and the connection to the ivory trade.

The theory behind public outreach is that if ivory were to become highly unfashionable – even shameful – to possess, demand for the product would drop to such a point that elephant populations would no longer be facing such a huge problem.

Fundraising for anti-poaching teams, and even visiting designated rainforest tourism areas in countries like Gabon or Congo, also goes a long way to stopping the killing by funding important work.

Two studies released in 2016 reveal the extent of the trouble that Africa’s elephant populations are in.

Subsequently, the species has a ‘doubling’ rate of 60 years under current conditions. That’s approximately triple the time it would take the savannah elephant population to achieve the same feat.