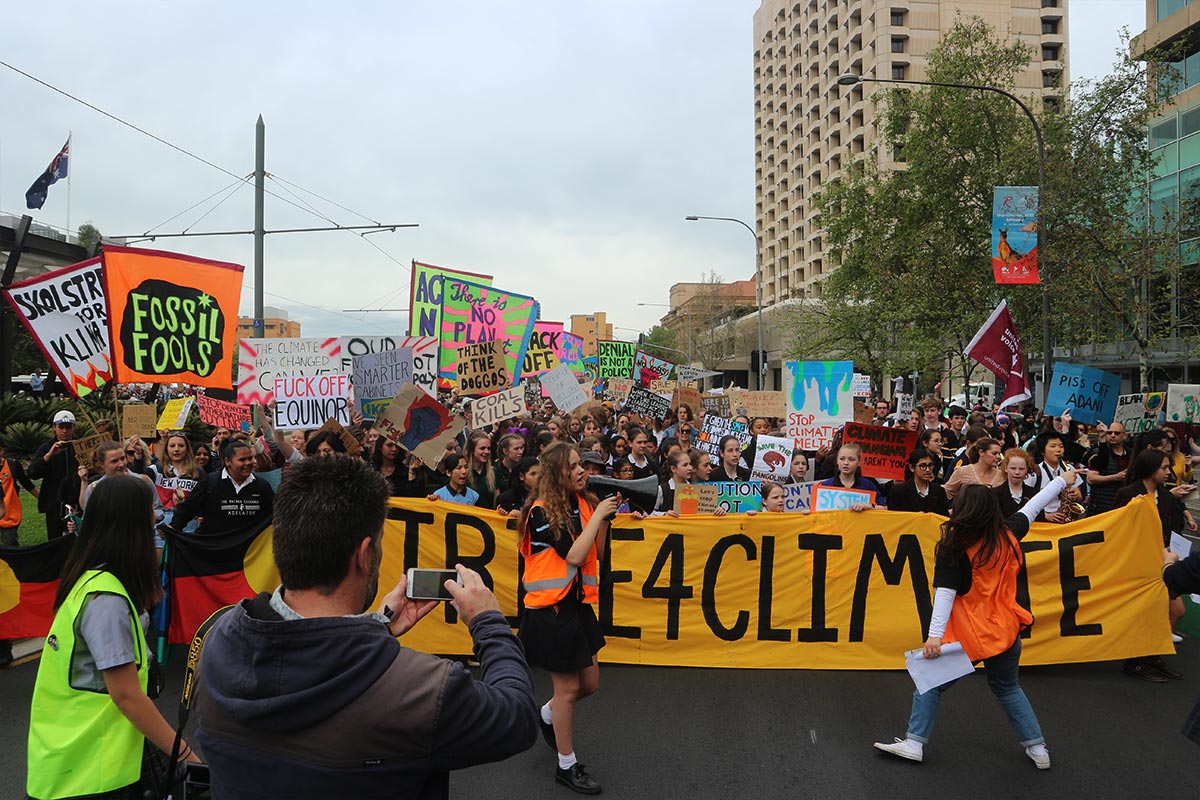 At this point, what more is there to say about the Climate Crisis? Chances are that if you’re reading this, you understand the stakes. So maybe it’s time to pull some focus from the despair of where we’re at and appreciate where we can go – if we follow the children.

Today, around the globe, school students took to the streets in huge numbers for the second time. As the marches finished up here in Australia, they began in Asia. Soon, they’ll be starting in the US and Europe.

I was at the one in Adelaide – a small city compared to some, but with a passionate body of students, parents and supporters who turned out in droves. The last time Adelaide saw something like this, people were marching against the War in Iraq.

The difference, of course, is who was leading this protest. As was the case in March earlier this year, students delivered the rousing opening speeches. Students marshalled the crowds. Students started the chants, and led us to the steps of the Parliament that – one day soon – they will be sitting in.

It began in Tarntanyangga/Victoria Square this time. The crowd began spilling in hours before the event kicked off, and the numbers exploded.

Doha Khan, Adelaide’s inspirational student voice, welcomed the crowd and began to prepare us for what was to come.

“I’m 15, and I’m scared.” A sentiment far too common, with rates of climate anxiety booming amongst young people.

“I once had positive dreams,” Khan continues. “Now they’ve been polluted. They’re slick with oil.”

At this point in the speeches at the March rally, the heads of the adults were beginning to drop. The reality of how our kids were seeing this situation was hitting home.

But this time, as the speech went on, there was a sense of eager optimism. Khan’s poetic, stern delivery of the current situation was now something for us all to cling on to as we watched the buzz of the kids in school uniforms.

We know that our generation, and those before us, have failed these kids. But they know what to do about it. They know the technology is available to sequester carbon. They know that planting trees will mitigate a lot of what we emit whilst transitioning to zero emissions. The future that they know is possible is a bright one if the will is there.

And yet, there are those who refuse to admit the circumstances, or are too connected to industry to put the future ahead of their wallets.

“To the adults that laugh at our demands: do what you want,” said Khan. “You’re on the wrong side of history. You’re leaving it up to your children to clean up your mess!”

And there sat the point of difference from earlier in the year. These students had been here before. They had rallied, and called for progress. And they saw Australia do nothing.

And so this time, the vibe was different. They no longer expect help from above.

They will take the reins and do it themselves.

“Strike! Occupy! Shut it down! Bring the system to the ground”

And so they marched.

If the crowd at the last rally felt huge, this one was something different. At 1:09pm, under brewing clouds and flashing sirens, the mass took to the street and began their walk to Parliament House.

By the time the front of the rally hit the steps of government, the back of the crowd was still spilling out of the square – a one kilometre trek back down King William Street.

Crowd control had trouble getting everyone to fit – and they couldn’t do it. Well over 10,000 people were here, perhaps twice that – far too many for the steps of Parliament – and so the crowd spilled back down King William until the front end began to disperse.

Chants full of anger, or of hope, or of fear, had run up and down the main street, and now they centred themselves outside the legislative building.

“No more coal. No more oil. Keep that carbon in the soil!”

“Strike! Occupy! Shut it down! Bring the system to the ground!”

And the key one, the one that groups all over the rally kept coming back to:

“What do we want? CLIMATE ACTION. When do we want it? NOW.”

A new dawn for the Climate Crisis

This is not the first rally of its type. It won’t be the last. But it did feel like a moment that we could look back on as the day the kids threw down the gauntlet: change, or get out of our way.

For their fear and their disbelief at our inaction seems to be dissipating into anger. As they’re getting older, they’re able to look at us and ask, “Why?”.

But it is that same generation that is going to save the world. It is not up to us to decide if this change is coming any more – it is up to each of us to make the decision: support these kids as they mould the planet into what it needs to be, or carry on as per normal and watch them do it in spite of us.

Related Topics:Climate ChangefeaturefeaturedSchool Strike for Climate
Up Next

You’re on a plane, and spiders are part of the engine.