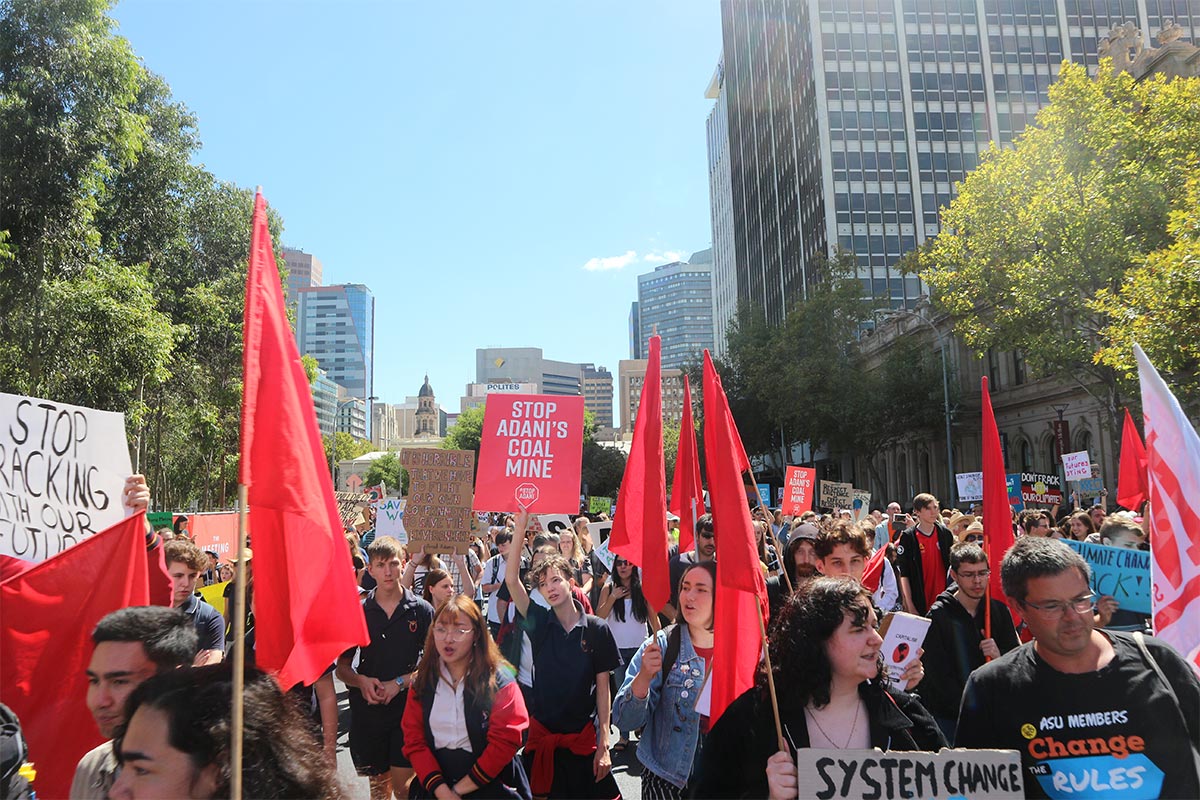 On a bright, hot morning in the South Australian capital, thousands of children began to gather on the steps of the Parliament. They should have been at school, and in more normal times, they would have been.

But this is no normal time. Decades of inaction by the adults they depend on has left these kids with a fragile future – one that they are no longer prepared to leave to us.

And so on 15 March 2019, tens of thousands of children around the world walked out of school for a pre-planned strike, organised by and for them, and aiming to deliver a message to the current leaders.

This is a photojourney through the Adelaide rally, where we saw thousands of future leaders rile against current political indifference.

It’s 11am, and the sun has begun to peak out over the ominous, ancient government complex, casting a shadow over the children on its steps, but bathing the gathering crowd of proud parents, supportive adults and intrigued onlookers in a hot glow.

As the crowd builds, there is a mixture of joy and sombreness – as if in a hospital waiting room where one hopes the sick will walk out healthy, but dare not believe they will.

‘What’s the point of going to school without a future?’

‘Hope does not lead to action. Action leads to hope!’

‘Kids will rule the world so help us save it!’

And in front of all that, a bustling, bursting crowd of onlookers flowing onto Adelaide’s busy North Terrace in the middle of a Friday morning. Police are there, along with crowd control, but eventually they give up trying to contain the crowd and instead stop traffic and trams.

Eventually the time seems right to begin. The crowd waits, and the two young highschool students behind it all – Doha Khan and Deanna Athanasos – hold up a microphone.

Thank you for coming, they say, but before we begin there will be a Welcome to Country by the traditional owners of the land, the Kaurna people. From crowd control and interpretive signers for the hearing impaired, to appropriate measures of respect for those here before us, they’ve thought of everything – not allowing those adults in power to find gaps in their planning.

Following the important recognition of ATSI people, studiously observed by the multicultural, multi-aged crowd, Khan and Athanasos are back on the steps and begin what will be a round of rousing, heartfelt speeches by the organising students.

They do not disappoint. Each line is punctuated with a call to action, and laced with a fury that belies the speaker’s age.

“We have three demands,” exclaims Khan, each one followed with an outpouring of applause.

“One: Stop Adani coal mine from going ahead. Two: No drilling in the Great Australian Bight. Three: Transition Australia to 100% renewable energy!”

These young people are not doing this lightly. They know what they’re talking about. They’ve done their homework. They know the issues at the heart of the problem and they understand just how much is at stake.
One of the speakers, 14-year-old Meredith, ends her speech with an impassioned cry: “You can’t feed eight billion people with money!” The crowd gives a response that MLK would have appreciated.

As the speeches continue, the March sun is glowing hotter and hotter. I’m beginning to question my reasoning behind a black t-shirt, and the symbolism of what is happening is not lost either. As the kids protest in the gentle shade, the adults cower under a blistering sun.

For now – perhaps for this moment only – it is our generation burning, not theirs.

Tom, the final speaker, comes to the front. He stresses each sentence, seemingly knowing what the crowd needs to hear. He has the teenage audacity to spin a Winston Churchill quote to his own means, and he delivers it with a power that would have made the statesman proud.

Khan steps confidently forward. The crowd knows that was the last speech, and is captivated with what these kids – these kids! – have planned next. Khan doesn’t disappoint.

“Wow, what an inspiring speech,” she says, gifting Tom a big grin.

“I think we all know what it means…”, and with that, she starts a chant with more poise than I’ve seen at any football ground in the world.

“No more coal! No more oil! Keep that carbon in the soil!”

It rings around the street. Deafening. Those in their cars can’t help but listen because, well, they can’t move. The crowd has just continued to grow over the past hour, and now one of the city’s major intersections is at a standstill on all sides of the road.

“No more coal! No more oil! Keep that carbon in the soil!”

She lets the last chant ring out, and hands the mic to Athanasos. Then comes the announcement the politicians were dreading.

“We will be here every Friday from 8 till 3, and we will do it until there is meaningful action on climate change!” The crowd cheers, though stunned.

There is pride here amongst the adults, no doubt, and admiration in spades, but it is with a heavy heart that we realise these kids are forgoing a day of education each week for the foreseeable future over an issue we should have handled for them.

Khan is now preparing to kick off the march to Tarndanyangga/Victoria Square. She asks for the crowd to let the school kids through to lead it. This isn’t a march for or by you, it implies. This is a march for us. For me. For my generation to show you what needs to change.

And with that an ocean of young people, passion pent up through over an hour of waiting, begin to assemble. And the mood is changing.

Whilst there have been smiles and proud looks between those congregated on the street, there has been a heavy feeling of shame. We have let these kids down. Many of the adults have tears in their eyes as they watch the next generation – this wonderful group of brazen, modern, courageous and inspiring kids – march toward a future that we are responsible for.

But now these young leaders are taking over where we have been standing, and the vibe is taking on a tune all of their own. The group is thrumming. There’s a marching band, dancers, kids with backpacks slung on the arm that isn’t holding a banner.

From a feeling of anger at what we’ve done springs an unintended shiver up the spine at what this group – and indeed, their compatriots around the globe – will undo.

I stand in awe in the middle of a police-blockaded intersection, taking photos of the gathering throng. The march commences, and the kids can be heard through the CBD.

After watching the procession, bigger than I could have imagined, continue to file past me, I decide to work my way up the main street of the city to try to catch the front of the crowd as they enter their destination.

What amazes me as I rush forward is the variation of chants. As I progress up the snaking line of some 7,000+ people, each bundle of kids is chanting something different.

“What do we want? Climate Action! When do we want it? NOW!” I pass them, and the next one hits me: “Stop Adani! No more coal!” This is followed by the chorus that rang out before the march, led by Khan, and then followed by one protesting drilling in the Great Australian Bight.

It is putting paid to the idea of the dissenters that these events are put together by a few kids and adults, and the rest are just here for the ride. Not at all. These are passionate future leaders who have had enough and are demanding a change.

The size of the crowd is breathtaking too. I pass an elderly woman who has stopped to watch it all. I hear her whisper to her friend, “They’re still coming!” with an indrawn breath. Yes, they’re still coming, and it doesn’t appear they’ll stop.

On a day filled with symbolism, the group eventually gathers in the green oasis of a park in the middle of a concrete city – an island of green amongst the desolation of a burning planet, deforested to death.

The carnival atmosphere is building now, and tired parents congratulate each other on their inspirational youth. I’ve never needed water so badly, so I find my nephew to say goodbye. Finley is 9 years old, and this is not his first climate change rally. He was at the earlier edition last year.

I ask him what he thought of today.

“I found it inspiring,” he says, “and I learnt about democracy. I learnt that a democratic Government is for the people, by the people, and they have to listen to us. I’m proud.”

Tears well up in my eyes, as they do again now whilst I type it.

This is the future. Young people that are scared for their lives, and know that adults aren’t protecting them. Kids in primary school who understand more about politics than I would have dreamed at that age, and that are ready to take our planet into a bold new world.

One of the young speakers today asked how politicians could see what is happening to the world when they’re up to their shoulders in the pockets of big oil companies.

Our future leaders are speaking to us. Let’s see if the current ones will listen.