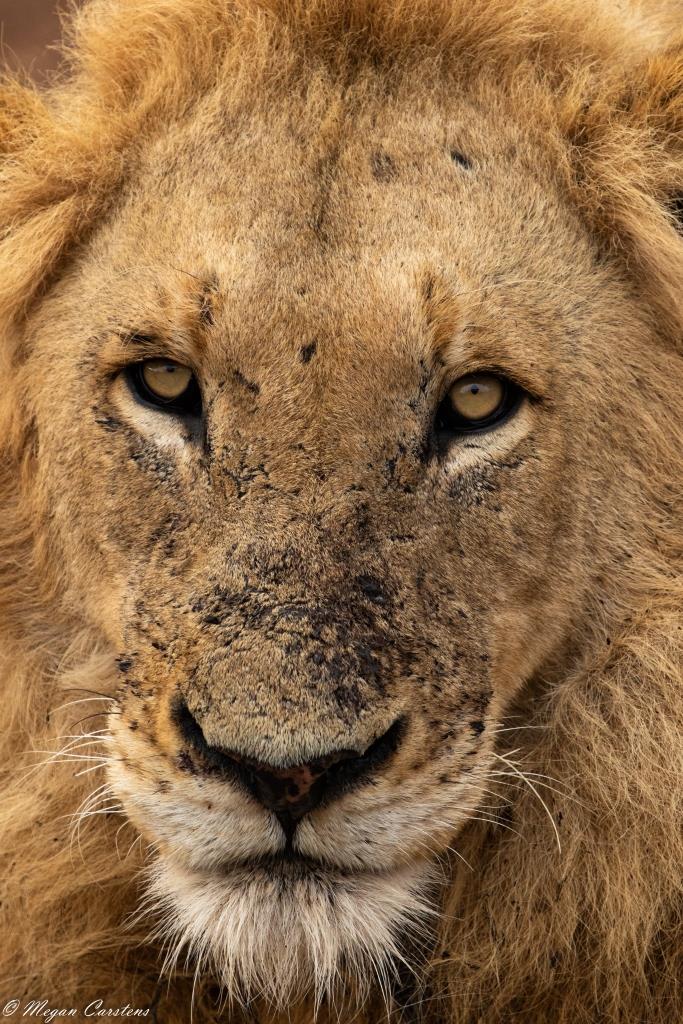 Window to the Soul: A super close-up of a male lion, showing his intense stare. To me, looking into his eyes, it’s as if you can see his whole life flash by and his emotions – he is not just another animal or lion. He matters. Image: Megan Carstens.

I have always been the creative type, forever searching for an outlet that was right for me which I could never find until I picked up my dad’s camera in the Kruger Park for the first time. I was 16 years old when that fiery passion ignited within me. At first the photos were to capture memories, but every time I picked up that camera, I felt different, exhilarated and utterly, purely happy. Beauty: Beautiful female leopard in a fever tree – a very rare sighting. I feel this image truly shows her raw beauty and a softer, more “cuddly” side of a leopard. Image courtesy of Megan Carstens.

I knew then, that it was something I wanted to pursue and that I had found what was meant for me.

Photography is not only about freezing a moment in time, to me, it is so much more. I use my photos to communicate to people and send a message. I am always trying to capture an animal’s true emotions and unique personality. They all have feelings just like us and are their own one-of-a-kind being, and I strive to bring this across in my photography.

Photography is also a means to create awareness and promote conservation in my eyes. Rhino searching. Rhino photographed in solitude. This image speaks volumes to plight of the rhino. I feel a certain sadness is conveyed in this photo emphasising how few rhinos are left. Something must be done before there’s no rhino in this image anymore. Image courtesy of Megan Carstens. Princess: This leopard portrays a soft, gentle elegance and really shows that leopards are not just sneaky, killing machines. They are pure, beautiful creatures that should be treasured like an old photograph. Image courtesy of Megan Carstens. Landscape Elephant: An elephant coming back from a late morning drink at the dam. I feel the struggle of the dry season is really highlighted in this image and shows the harsh environment that the animals must survive in. Image courtesy of Megan Carstens.

I want to make a difference in this world – I want that difference to be for the animals. My photographs are my starting point for doing just that. An image is worth a thousand words and can have a huge impact on a person. It’s a gateway, the first step, in creating awareness for an issue – getting people’s attention and drawing them in, which will allow you to explain and expand.

Awareness is so important because without it, people don’t even know that there is an actual problem, however, once aware, action can take place, which is vital for the survival of our wildlife around the globe.

Conservation is crucial to ensure the continuity of the natural world and all the species within it. Humans have always been nature’s worst enemy and conservation is the only real defence we have, to save what is left. Hangry: Aggressive female lioness eating on her wildebeest kill. This image shows the power and aggression of a lioness – a true warrior and protector. Image courtesy of Megan Carstens. Standing out: Black and white emphasises the emotions and hardships this male has been through as well as lions in general with poaching and the lion bone trade. Image courtesy of Megan Carstens.

It is important because it is our only way to remedy what we have destroyed and taken from the wild, a way to fix our mistakes and make things somewhat right – or at least try to.

It is a topic I feel extremely strongly about. Just think about it, this planet survived for millions of years before we existed. It was healthy and thriving before we came along and ruined it. These animals were here long before we were, they kept this Earth alive and well and they have every right, if not even more than us, to be here. We need to make a change before it is too late. Zigzag: 3 male lions part of a coalition of 6. This image has a strong family theme to it for me. Animals have their family and their loved ones too, who depend on them and care for them. Image courtesy of Megan Carstens. Bad day: Elephant showing some cheek towards us being stopped. Elephants’ characters and personalities are always full of funk and vibrance – this shows a rather human aspect of the elephant. Image courtesy of Megan Carstens.

Why I’m a Wildlife Photographer