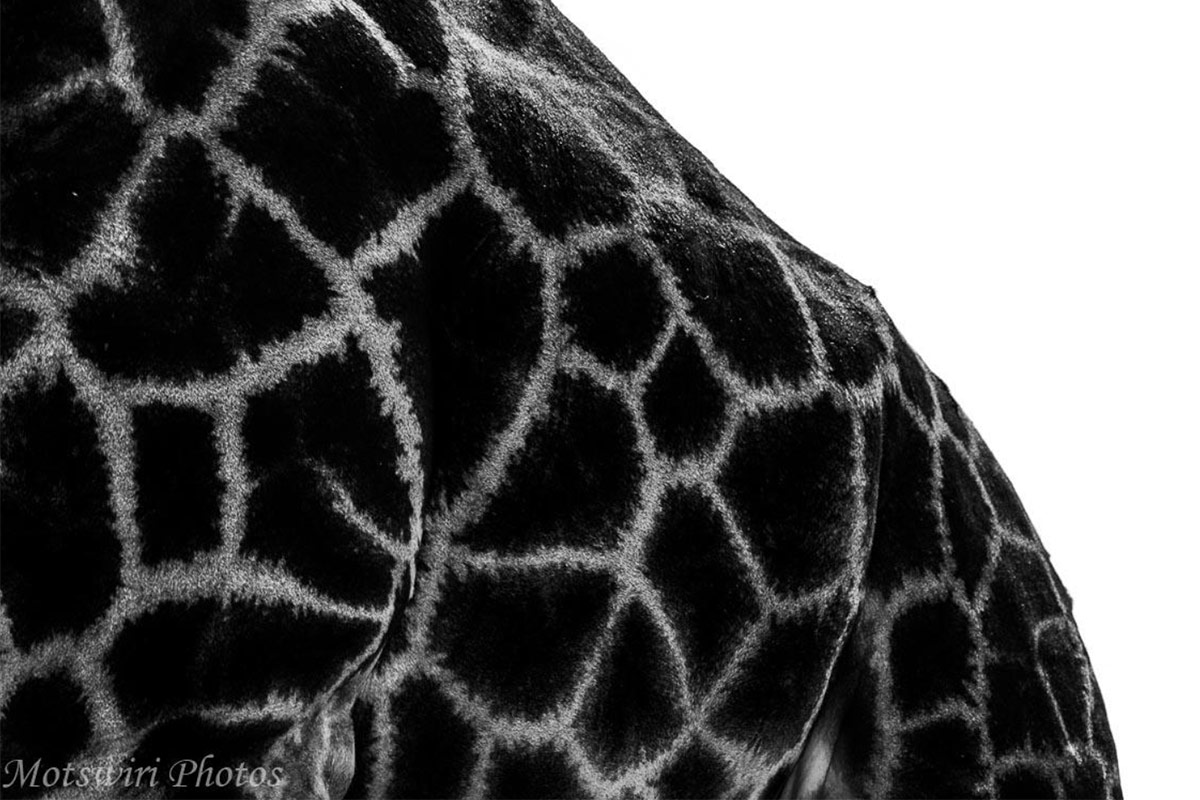 A giraffe in all its glory. Image courtesy of Tristen Woodward.

My name is Tristen Woodward, I grew up in Botswana and developed early on in my life a deep love and respect for the country’s biodiversity and wildlife. I decided after some time that the best way to capture this was through photography. I have since been pursuing the goal of sharing this passion with the world. Growing up in Botswana we were submersed in wildlife, from finding a snake in the kitchen while making our breakfast, to seeing Burchell’s Zebra (Equus quagga) on the drive to school and coming home to a dozen crocodiles slowly weaving through the dark dingy water of the Notwane river.

When I was 5 years old, I went on a camping trip around Botswana. For me the most memorable experience of the trip was the two-day journey between the campsite in Chobe National Park (Ihaha) and Moremi Game reserve. When we arrived in Chobe we were engulfed by elephants; they were so calm they would walk straight past your vehicle without batting an eyelid and so close they would even brush against the bumper. You’d see a year-old calf running around not even phased by the dull rumble of the engine acting as if it was the same soulful voice that came from deep inside the belly of the matriarch. In late July/early August 2018, I returned to Chobe – a place with a booming tourism industry that had blown up since my trip some 11 years ago. To my amazement there where hundreds of boats out on the river each evening with thousands of tourists, and that didn’t even take into consideration the amount of people going into the park by car. I saw at least 15 different game vehicles each with a minimum of four guests all out there to see the wonders that such an untamed country has to offer.
What I saw really saddened me.

The elephants that were once oblivious to human interaction in their environment were now timid and scared. Not once did I see a herd of elephants walk within 10 meters of any vehicle. We would park, turn our car engine off and wait for a herd of elephants to pass us on their way to the river. These elephants, however, wouldn’t continue their straight course: instead you’d see them stop at the edge of the bush and walk parallel to the river until they were at a distance from the car that they felt safe. Instead of young calves running around with a naughty, wild twinkle in their eye, they were hidden behind the forest of large stocky legs of the rest of the herd. Seeing this stirred something deep inside me, this realisation that the respect we once had for these majestic creatures is all but gone caused me to take notice of the vast impact we can have on the world without even knowing.

While I was in Chobe, I was lucky enough to stumble upon the spectacle of a 1000-strong herd of buffalo, an animal that not even the bravest of men will stand and face because they are so unpredictable and of awe-inspiring stature.

I was extremely saddened to hear recently that 400 of these animals had died. 40% of this herd had perished not over the course of a few months or years, but overnight, drowned in the Chobe river. I struggled to believe this initially as I had witnessed them being almost as comfortable in the water as the fish that dwelled there. Some people I spoke to suspected that they were chased into the river by lions who often follow the herd, and had become trapped on the side of an embankment that was too steep to climb.

However, people also spoke of hearing a gunshot that night, from the Namibian wetlands side of the Chobe river. It was believed that this caused the buffalo to stampede. Some getting stuck and trampled, others getting drowned by members of the herd trying to get out of the water and back to the Botswana side.

Whatever the reason, it was discovered the morning after that this had taken place over the course of the evening and the locals gathered to harvest the dead animals. This made me wonder, if 40% of the population of one herd of buffalos could disappear overnight because of humans, what else had we done to our planet?

Statistics from WWF showed that 60% of the world’s wildlife has been wiped out since 1970. In the past 10 years we have lost 7,100 African rhinos, more elephants are currently being poached per day than are being born and giraffes – as of 2018 – have been listed as an endangered species. A giraffe in all its glory. Image courtesy of Tristen Woodward.

In the past 100 years we have gone from having 200,000 lions in the African wilderness to having this looming feeling that they could all be gone forever. With my photos I want to try and shape a world where people are more aware of the consequences of their actions on the beings we share this planet with.

Those species that have walked the plains of Africa for thousands of years and swum in the seas before we had even discovered fire. The biodiversity that has survived and thrived for millennia is being brought to a swift demise at the hands of the so called ‘greatest species’.

The conservation of our planet’s wildlife needs urgent attention and we must act now and quickly to save the sinking ship that is mother Earth.

Animals have as much right to live as we do. The longer we take to realise this, the shorter the time until we find ourselves living alone amidst a sea of death that will slowly wipe us out just as we did to the rest of the world’s biodiversity.

The Connection: Wildlife Photography and Conservation

I Went In Search of A Wild Lynx