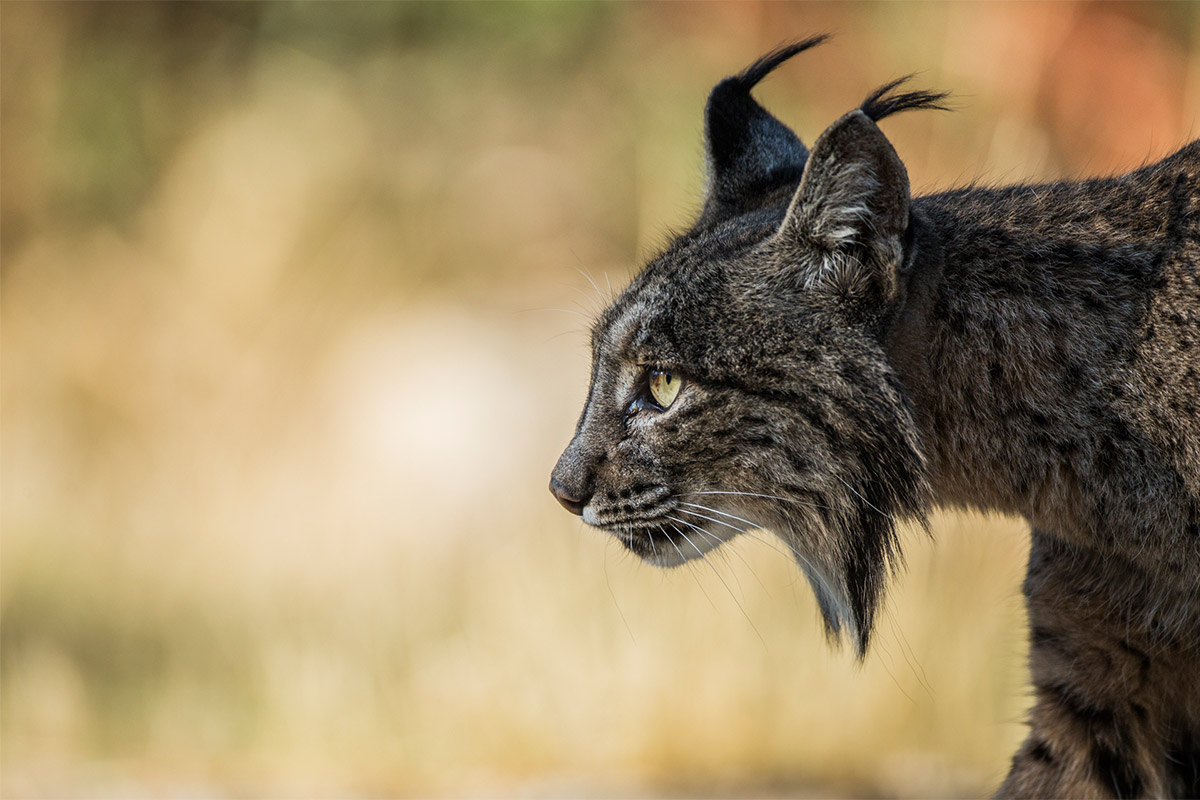 Luke Massey went in search of a wild Iberian lynx. He found it.

When you think of southern Spain, for most people the first thought is of the Costa del Sol, – cheap G&T’s, crowded beaches and sunburnt tourists. Around two million people a year visit the Costa del Sol, and my guess is that very few of them know that only a couple of hours drive north you can be in the rolling hills of the Sierra de Andujar Natural Park. A landscape carpeted in aromatic rosemary, twisted holm oaks – their gnarled branches dripping with Old Man’s Beard – and giant granite boulders that jut out from the hillsides. Overhead soar Spanish imperial eagles and black vultures, red deer graze the hillsides, but these aren’t the animals that make this habitat famous. This Mediterranean forest is home to an almost mythical beast, one of the rarest cats in the world: the Iberian lynx.

Smoky black sideburns frame a pair of striking green eyes that stare straight through you, and out from its ears curl a distinct pair of jet black tufts. A coat speckled with spots and smudges provides the perfect invisibility cloak – it is a ghost of the mountains: as quickly as one appears, it melts back into its surroundings.

I’ve been lucky enough to have countless encounters with this elusive feline. It’s become an annual pilgrimage of mine to head into the mountains to get a glimpse of, in my opinion, one of the most epic cats in existence. One of my most memorable wildlife encounters was with a pair of Iberian lynx. I’d been searching for the lynx for months. My camera trap had seen more lynx than me, I was beginning to lose hope. It was dawn and I’d headed to one of my favoured spots, it was coming to the end of a long dry summer so I thought going to the water may bring me success.

I hiked up the hill to give a scan of the hillside and check a regular marking spot. On reaching the summit I was met by every naturalist’s dream: a moist, steaming pile of lynx poo…

There must have been a lynx within metres of me, I scanned around. Nothing. Every promising boulder lay empty, no cat sunning itself, every patch of grass looked normal, and the big giveaway – the local magpie population – remained silent.

With my current streak of bad luck I assumed I was minutes too late and began to head back down to the water. As I passed a bush I heard a noise, I stopped and I heard it again – a very cat-like miaow. It sounded like it was right next to me – surely not. I glanced to my left, nothing. Then into the bush to my right and there staring straight back at me was an Iberian lynx. Minutes passed and the lynx remained unmoved, then another movement, there wasn’t just one lynx within the bush but two! I spent the next few hours slowly following the lynx as they moved from bush to bush, rock to rock and then lost them as they melted into the scrub. A memorable encounter that I didn’t want to end, and it didn’t.

As a wildlife photographer there are certain shots that you visualise, the perfect scene with your target species framed perfectly. Most of the time these fantasies result in disappointment, the wildlife doesn’t cooperate, the light goes and then the species appears or vice versa. But, just sometimes it works out.

Ever since I started my lynx obsession I’d visualised the shot: a lynx sprawled atop a moss covered boulder. I wanted to show the regality of these cats, but also just how well they blend into their surroundings. I returned that evening to the site of the morning encounter. It was deathly still, the only sound the wheezing of the local spotless starling flock and the odd splash from a fish jumping for flies in the river below.

I wasn’t disappointed. I’d have endured a million evenings like that one if it meant I got an encounter like that morning’s once in a while. But it seems it was one of those days when I should’ve bought a lottery ticket. Just when I thought it was too late, the ghost appeared. On the hillside above she sauntered, weaving her way between the rocks before leaping up and sitting down to groom. Just perfect.

In 2002 these cats were in dire straights. They numbered less than a hundred individuals scattered between two isolated locations. Habitat destruction, persecution and a catastrophic decline in the lynx’s favoured prey, the rabbit, had led to almost the first feline extinction for many, many years.

The EU and the Spanish government managed to leap into action in the nick of time. Cats were taken from the wild and zoos and placed into a number of specially built captive breeding centres. In the final strongholds, rabbit populations were bolstered and habitats improved, whilst researchers searched for suitable areas to possibly reintroduce and relocate lynx too.

It was touch and go. Roll on almost two decades and the return of the Iberian lynx can perhaps be looked at as one of the most successful conservation projects of all time. Iberian lynx can now be found in both Spain and Portugal and at the last census there were almost 600 individuals living in the wild. Thanks to GPS tracking the astonishing journeys of the lynx can now be seen, with individuals covering thousands of kilometres as they journey around Spain looking for suitable habitat.

The lynx is certainly not out of the woods yet, still overly reliant on rabbit populations and a very weak gene pool, disaster could yet befall it. And man poses perhaps the greatest risk: in 2017, 31 lynx were killed on Spanish roads, almost 10% of the total population.

The lynx’s comeback, however, should give a sign of hope. A lesson to not let a species reach such critical levels and in a world where we are losing species at an alarming rate. The good news story of the return of an almost extinct species should be heralded.

Why I’m a Wildlife Photographer

The Path of the Panda