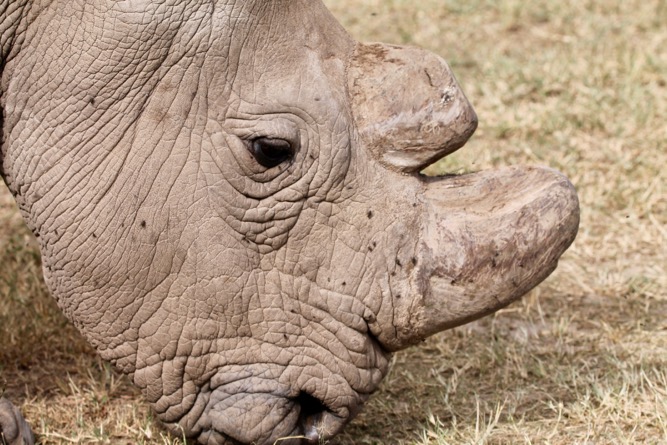 Many of the articles in Conjour begin by detailing the status of the species being written about. Well, with the Northern White rhino it’s easy: there are three. Three individuals left: two females and one male. It is fair to say that they are critically endangered and, sadly, already functionally extinct. All three of the remaining Northern White rhinos are living under heavy guard in Ol Pejeta Conservancy in Kenya.

The Last of their Kind

Moved to Ol Pejeta after spending their entire lives in captivity, mostly in zoos in the Czech Republic, it was hoped that once in a more natural environment something could be done to repopulate.

Unfortunately, the last male is too old to reproduce; his knees are too weak for the process, and he is too closely related to the remaining females regardless. There is some confusion on how related they are, but a guard at Ol Pejeta told me the two females are his sister and granddaughter in turn.

It is possible that the species may be saved by using another rhino species as a surrogate and some sort of hybridisation, but that’s an article for a geneticist to tell – I’m a conservationist. I focus on in-situ solutions to species preservation, of which there are none for the Northern White as a species and all is already being done to protect the individuals. I had the opportunity to meet the last remaining male, Sudan. Named so after a country in which his species once roamed, he is now kept in a small fenced pen under 24-hour guard.

Unfortunately, my experience meeting Sudan wasn’t as unique as you might think considering he’s the last male of a species. Sudan is often greeted by select visitors to Ol Pejeta in a celebrity-like meet-and-greet. Meeting the final individual from a result of thousands of years of evolution is a sobering experience. It is not something that should happen, and not something we should be aware of if it did.

This was an incident in which I was, by photographing Sudan, quite literally documenting history.

The Purpose Behind the Photo

It would be easy to dismiss these photos as a waste of time: nothing can be done to help the Northern White, nothing that can be done from a photograph anyway. It can be argued that unless you are an expert, a photo of a Northern White would be indistinguishable from any other rhino species. However, the primary tool in a conservationist’s arsenal is awareness.

Awareness is key. Key, for the preservation of the planet. You can’t be proactive if you’re unaware of a plight.

They say a picture paints a thousand words. Well, a picture also paints a conservation message for art has long evoked passion and reflection, and these are the things needed by everyone in order to make a difference. By photographing Sudan, the aim was not to create an entry for a future history book – it was to use the demise of this species as a martyr for other rhinos, other African mammals, other biodiversity and other nature.

In a world where most photography consists of selfies or #foodporn, I try to take photos in which the natural world is the star of the show.

Nature needs no filter, and wildlife needs no photoshop. I don’t take photos because I’m particularly skilled with a camera or because I’m an artistic type with an abundance of creativity. I take photos because there is a very real possibility that I’m documenting what could soon be lost. I’m lucky that this early into my career I’ve been able to witness some truly rare wildlife. I’ve sat in a wooden boat slowly filling with water as a mother orangutan and her young swing along a Bornean river. I’ve found myself surrounded by a curious baboon troop as I’ve surveyed invertebrates in the South African savannah. The experience I’m most fortunate for, however, was due to the most unfortunate reasons of all: Sudan.

Why I Do It

When I share a photo I try to do so with humour.

Although most photos I have could be occupied with a serious message about the decline of that species, I try to evoke a feeling other than guilt.

They say sex sells – well I believe humour saves. If I can make you laugh then hopefully you will remember the photo, and hopefully you will have been endeared to the subject. It’s all too easy to focus on the negatives in the world, especially the natural world (after all, it is in a sorry state) – but unless nature and wildlife brings your audience as much joy as the moment captured bought you, why will they care to conserve?

Again, if a picture paints a thousand words, the story I’m aiming to convey tells that wildlife is often breathtaking and calling out to be enjoyed, but also acts as a reminder that we are in grave danger of losing the natural world, and if we don’t act now, photos like these will be all that remains. You can see more of Jack Hicks’ beautiful photography on his Instagram page: @jackosapien. Head over and give him a follow.