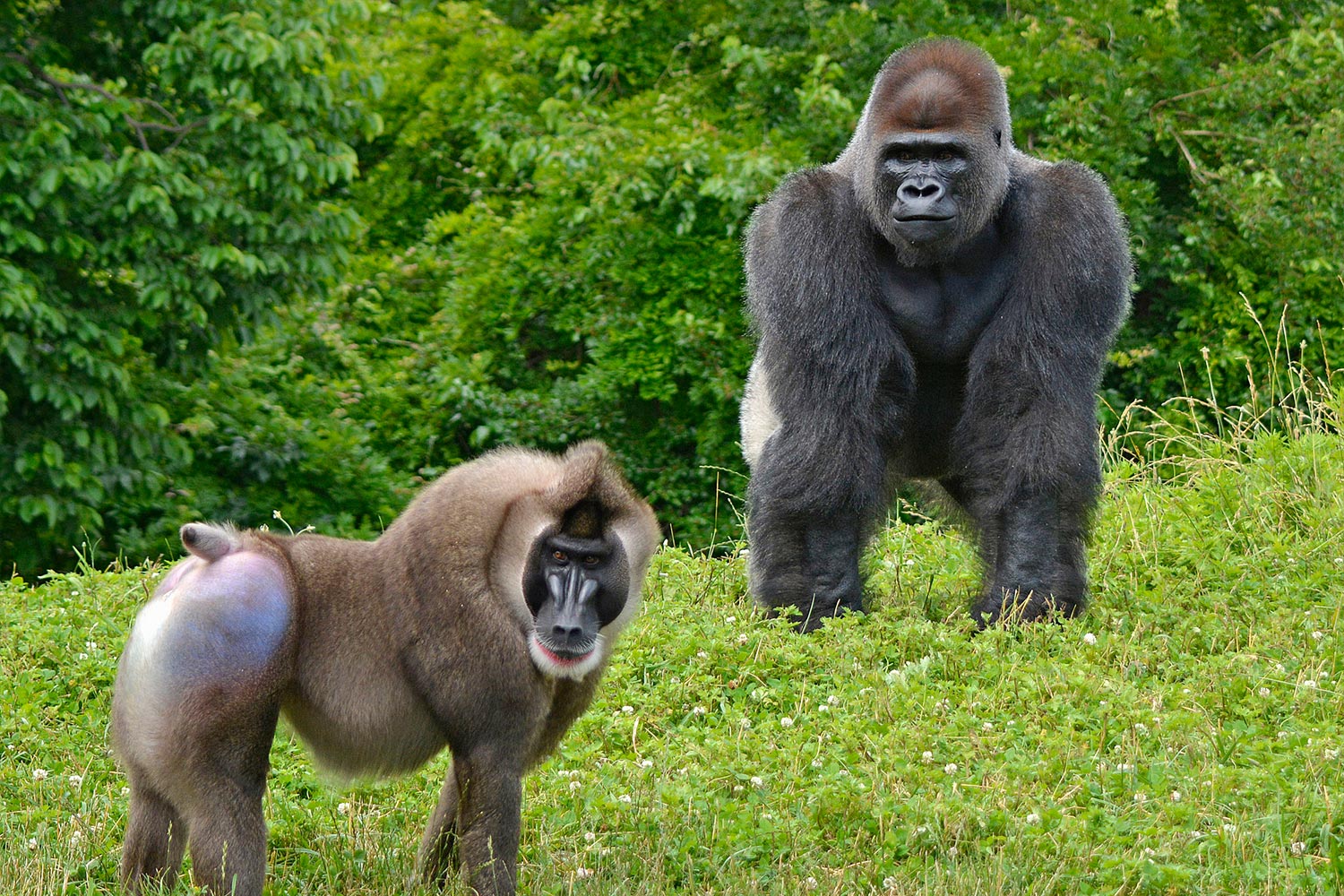 When listening to Dr. Allard talk about animal welfare, one word stands out: responsibility.

“Zoos have a profound responsibility to ensure the welfare of the animals for whom they care. Each individual animal has needs, and we must be sure that they are thriving, not just surviving.”

This philosophy is threaded throughout the Detroit Zoological Society. Good is not good enough. Instead, Dr. Allard and her colleagues strive to ensure every animal leads the best possible life. Such commitment has not arisen overnight however. The present Detroit Zoo opened on August 1, 1928 and, for much of its history, existed to entertain. Bears and big cats were kept in concrete grottoes, elephants and chimpanzees performed circus tricks, and visitors could ride the giant tortoises.

Kagan arrived at the Detroit Zoo in 1993 and began by embracing an animal welfare lobby often opposed to zoos. In his first year at the helm, the zoo partnered with the Michigan Humane Society to host one of the largest pet adoption events in the United States. Cats and dogs may not be the first zoo animals that spring to mind, but ‘Meet Your Best Friend at the Zoo’ was so successful it has been held biannually ever since.

Detroit was also the first American zoo to be approved by the Sanctuary Association in 1997. Amongst others, it is now home to a retired racehorse, three orphaned Alaskan grizzly bears, and a lioness, Katie, found guarding an alleged crack house.

Just as important as rescuing animals has been the recognition that some species will never thrive in Detroit. From the zoo’s opening, elephants were a star attraction, but staff became increasingly concerned about keeping such large, intelligent animals indoors through Michigan’s long winters.

In 2005, Detroit became the first zoo to voluntarily send its elephants to a sanctuary on welfare grounds.

Winky and Wanda lived out their days in sunny California, where they could interact with other elephants and roam an enclosure 30-times larger than their home in Detroit. Far from being an embarrassment, Dr. Allard considers the loss of elephants a source of pride and Kagan has said his only regret is not doing it sooner. Many other zoos have since followed Detroit’s lead.

For the animals that remain, commitment to welfare is more than just a philosophy. Under Kagan’s leadership, the Detroit Zoo has invested over $50 million in new exhibits. Its amphibian building received the prestigious Exhibit Award from the Association of Zoos and Aquariums in 2002, whilst its polar bear habitat – the Arctic Ring of Life – was commended as a Significant Achievement the following year.

These are more than just guest experiences. According to Dr. Allard, “Innovations in habitat design are also influenced by our commitment to animal welfare and future plans for new habitats will incorporate features that promote the ability of animals to display species-typical behaviors, as well as opportunities to make meaningful choices and to exert control over aspects of their lives.”

This commitment was recently demonstrated in spectacular fashion.

A Paradise for Penguins

On the shore of an inlet, lapped by waves and surrounded by snow-capped rocks, lives a colony of penguins. The temperature is near-freezing, but 80 birds of four species thrive here – kings, rockhoppers, macaronis, and gentoos. They squabble with each other, clamber through the snow, and belly-slide in the shallows. Underwater, though, is where penguins truly belong. Reaching speeds of 32km/hr (20mph), they plunge 25 feet beneath the ice and between the kelp. It could be a scene from Antarctica, but the ice and rocks were carved by sculptors, the snow and waves are generated by machine, and the colony has been visited by almost a million people since April.

This is a description of the world’s largest penguin exhibit, which opened this year (2016) at the Detroit Zoo.

The Polk Penguin Conservation Center is a flagship of the Detroit Zoo’s commitment to animal welfare. Members of the design team, including Dr Allard, travelled to Antarctica to observe wild penguins and experience their natural environment. The climate-controlled building took two years and $30 million to complete, making it the most expensive project in the zoo’s history. During design and construction, every effort was made to ensure the penguins thrived in their new habitat, but Dr. Allard believes the biggest improvement has been the tenfold increase in water volume.

“With 326,000 gallons of water at their disposal, the penguins are performing so many more underwater behaviours than we’ve ever been able to see before.” A recent paper in the journal Zoo Biology also reported that penguins display higher activity levels in larger enclosures.

Building a putatively better exhibit is not enough, however. The Detroit Zoo distinguishes between care – what is provided to animals, such as food, water, and enrichment – and welfare – how they experience the world.

Dr. Allard and her colleagues are therefore investigating whether the new standards of care set by the Polk Penguin Conservation Center have translated into greater welfare.

They monitored the behaviour and body condition of 27 birds in the old Penguinarium and plan to compare that information with data being collected now. This evidence-based approach will reveal how the penguins themselves responded to the new exhibit and what matters to them as individuals.

Says Dr. Allard: “At the end of the day, that’s what animal welfare is. It’s understanding the needs of an individual, how they experience their world, and the responsibility we have to make that world as amazing as we possibly can.”

The Center for Zoo Animal Welfare

Although a remarkable achievement, the Polk Penguin Conservation Center is just the tip of the iceberg.

For the Detroit Zoological Society, commitment to animal welfare runs far deeper and applies not just to penguins and polar bears, but to all 300 species in the zoo’s collection. However, as this philosophy strengthened, it became clear that the global zoo community was not doing enough to ensure animals thrive in captivity.

Kagan’s solution was to establish the Center for Zoo Animal Welfare in 2009.

A global hub for understanding and improving welfare in zoos, CZAW is an epicentre of research, a forum for debate, and a resource for learning.

Science is at the centre of its activities, because identifying what matters to animals is essential to satisfy their needs. Dr. Allard, who oversees the Center, discusses the breadth of research being carried out, on “species ranging from gorillas and giraffes to amphibians and reptiles.”

She tells us that, “All projects are designed and selected to better understand the impacts that living in the care of humans have on individual animals, which includes assessing habitat changes and monitoring husbandry and management practices.”

A major priority is discovering new and non-invasive means of assessing animal welfare. For example, the zoo is exploring ‘infrared thermography’, where pictures are taken that represent an object’s surface temperature, because the temperature of animals can vary based on emotion.

This is not simply an academic exercise. Dr. Allard emphasizes that she and her colleagues at CZAW “are integrated into the processes at the zoo that contribute to great welfare and collaborate with the other departments to identify areas of inquiry, monitor individual animals and share recommendations and suggestions in order to apply any findings.”

Through this team approach, research breakthroughs result in practical benefits.

CZAW also hosts events to exchange knowledge and discuss best practice. According to Dr. Allard, “We have made a commitment to providing training for animal care professionals in order to advance animal welfare and we do so by conducting annual workshops entitled ‘From Good Care to Great Welfare’.

“Animal care professionals from around the world join us for five days to discuss factors that impact welfare, and how to assess and improve animal welfare.”

This has solidified the Detroit Zoo’s status as a world leader in welfare science and policy.

The Detroit Zoo faces a bright future. It has received over a million visitors every year for the past decade and 2016 is on track to be a record-breaker.

Dr. Allard insists the public have been overwhelmingly supportive of efforts to improve animal welfare. This was demonstrated in August, when local communities voted to renew a tax that nets the zoo $11 million annually. The money will be used to convert the 1968 Penguinarium into a Bat Conservation Center.

In this and other projects, Dr Allard’s priority is clear.

“Animal welfare is a lens through which the Zoo’s plans are examined and evaluated,” she says. “As we move forward, we will continue to identify species that need more attention from a welfare standpoint.”

But the zoo’s ambitions reach far beyond Detroit. According to Dr. Allard, “It is the goal to have each and every animal living in a zoo experiencing great welfare.”

“We are seeing changes in the willingness to discuss welfare topics openly, which is a fundamental goal of the symposia we host. Our fourth international symposium will be hosted jointly with the World Association of Zoos and Aquariums in May 2017 and will focus on ethical challenges facing zoos and on making a global commitment to animal welfare.”

Increasing openness is an important first step, but there is still much to be done. Using the Detroit Zoo’s transformation as a model, CZAW developed a universal framework which any zoo can apply to put animal welfare at the centre of its operations. The framework is elucidated in a 2015 edition of the Journal of Applied Animal Welfare Science, but Dr. Allard outlines some necessary future developments.

“Zoos must be committed to developing policies that promote great welfare, dedicating resources to designing and implementing programs that support great welfare and continually evaluating practices to ensure welfare needs are being met,” she says, adding that “this may mean that zoos will house fewer species, or will make different choices as to which species to house so that they can focus on those that thrive at their institution.”

If it happens, this will be the next step in the evolution of zoos: From good care to great welfare. From animals that survive to animals that thrive.

The challenge ahead is daunting, but the Detroit Zoo has proved it is not impossible.