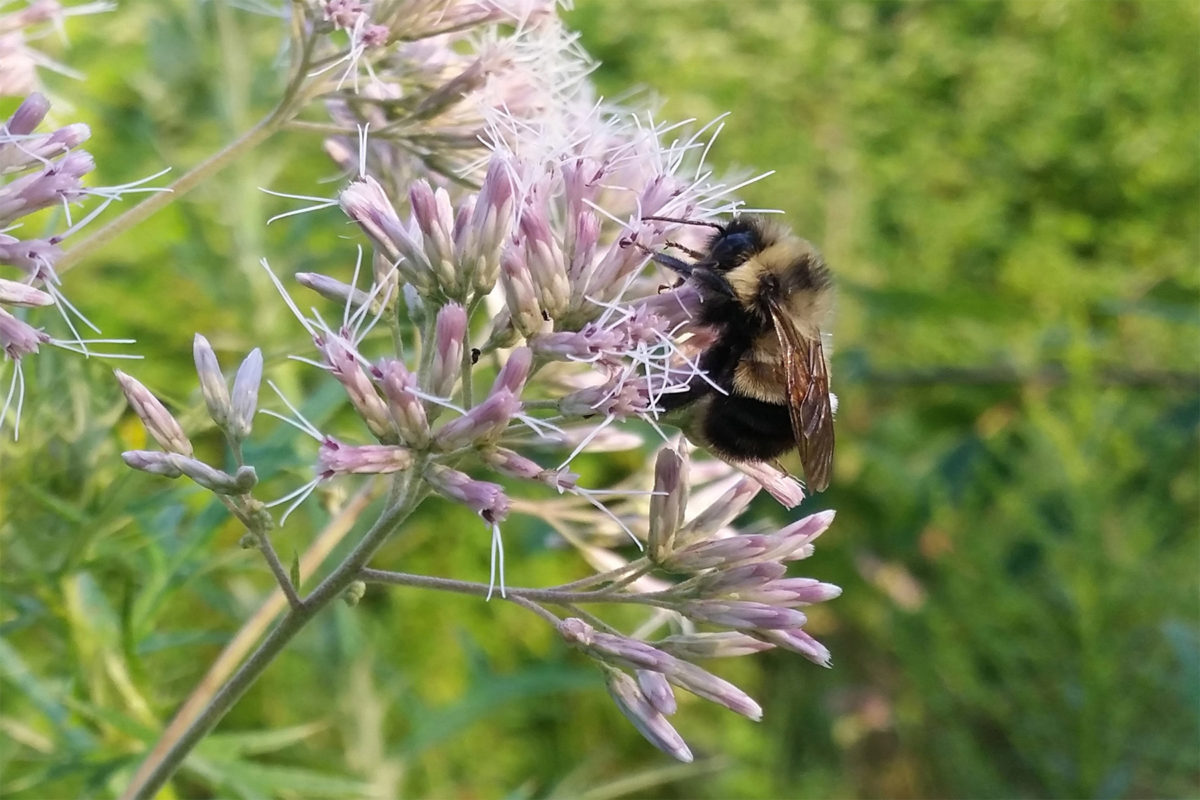 About the Rusty Patched Bumble Bee

The IUCN Red List outlines a dramatic story for the Rusty Patched bumble bee (Bombus affinis): declining in relative abundance, persistence and distribution across its range. This is a damaging tale of a path to extinction.

Typically originating in Upper Midwest and North East America, the Rusty Patch is like many bumble bees: nectar is a critical source of carbohydrates, so whilst it performs a critical function for the flora of the world, and, indeed, our crops, it also sources its protein through this task. Hand in hand, the loss of one outcome is a loss of the other. That’s bad news for both the bee and us.

The amount of pollen available, says Burns (2004), directly affects the number of Rusty Patched queen bees that are produced in a year. According to Cameron et al. (2011), relative abundance across the bee’s range has declined by up to 95%, and range losses are between 70-87%.

Likewise, the historic range of the bee has dropped by 87% based on a field survey a few years ago that collected more than 16,000 individuals. That compares to more than 73,000 bee specimens in similar studies historically. In New York, a 2003 survey of bumble bees, which consisted of over 1,200 specimens, did not find a single Rusty Patched bumble bee. In the past, this species was known to be ‘moderately abundant’ in the region (Giles and Ascher 2006). Across all ranges, average decline of the species is estimated at almost 70%. A sobering figure for an increasingly important insect group.

Normally existing in or around woodands, on open or short-corollas flowers, the rusty patched is a short-tongue species of bee and is Eusocial. This means it lives in colonies consisting of a queen, workers and reproductive bees.

The rusty patched queen ‘overwinters’ in a burrow and finishes hibernation in spring. Burrows are often used as and when available, meaning thinking exists that the amount of rodents in an area may directly affect the bee’s nest numbers.

When compared to other species of bee, the colonies of the rusty patched are reasonably large with up to 1,000 members living throughout a single season (Macfarlane et al. 1994). Until the first of those workers come out, the queen does all of the prep and care for the colony. Towards the end of that work is when new queens and males are produced.

Rusty Patched bees, as with other bumble bee species, are not believed to travel far from their nest, meaning appropriate flowers need to be located close by (normally within one kilometre) (Jepsen et al. 2013). A number of threats are recognised as a danger to the survival of this species. Namely, pesticide use – in particular neonicotinoid insecticides, pathogen spill-over from commercial to wild bees, habitat loss and climate change. As with many groups around the world, the domino effect of these issues is the impact on genetic diversity within the species.

Sarina Jepsen is the Director of Endangered Species and Aquatic Programs at the Xerces Society. She spoke to Conjour about the critical nature of conservation for the rusty patched bumble bee.

“In this role,” she explains, “I manage our endangered species conservation work, including work to protect the rusty patched bumble bee,” adding that the severity of the decline of this species is a worry. “It is certainly concerning that widespread, formerly abundant species like the rusty patched bumble bee face significant extinction risk. We know that more than one-in-four North American bumble bees face extinction risk, according to the IUCN Red List criteria.

“If we allow too many species of bumble bees to go extinct, we will start to see a loss of ecological function. More than 85% of flowering plants require an insect pollinator to reproduce, and many of these plants produce the fruits and seeds that feed songbirds and other wildlife.

So it is a dangerous situation that confronts us, but what about the rusty patched bee in particular?

“The situation facing the rusty patched bumble bee is really critical,” explains Jepsen. “This bee has been lost from about 90% of its historic range. The US Fish and Wildlife Service’s analyses predict that this species will go extinct in all but one ecoregion in the next five years.” Here, Jepsen references the Species Status Assessment which details: “Since the late 1990s, marked and precipitous declines have been recorded in spatial extent and in the number of extant populations.”

There are a number of issues, outlined above, that are putting the rusty patched at risk of extinction. Jepsen higlights pesticides as a key.

“Most notably… neonicotinoid insecticides, which are really concerning because they are highly toxic to bees, they persist in the environment (for months to even years, in some cases), they are systemic (all parts of an exposed plant, including nectar and pollen, become toxic to insects), and they travel through the soil and are taken up by plants growing near treated crops.” Jepsen adds, “Unfortunately, little is being done to address these threats.” But conservation is only started by recognising what’s going wrong – it also needs to be mended. So we asked Jepsen what the Xerces Society had in the pipeline to save the rusty patched.

“We wrote and submitted a scientific petition to the US Fish and Wildlife Service asking them to protect the rusty patched bumble bee as an endangered species under the ESA in 2013″, says Jepsen. “Similarly, we have engaged in advocacy for many years to ask the USDA and USDA-APHIS to protect wild bumble bees by regulating diseases in managed bumble bees.”

Aside from this high-level push, the organisation is also working with partners to raise public understanding, developing BumbleBeeWatch.org. It is because of this site that a more detailed catalogue of the extent of occurrence of the species has been developed. Consequently, says Jepsen, they have reached out to dozens of land managers in the right areas to encourage bee-friendly practices. This includes short courses covering education around identification and conservation of the bees.

It is not just locally the organisation has been working though.

Jepsen continues with a long list of programmes under way for the bee, including the petitioning of states to add imperilled bumble bees to their Species of Greatest Conservation Need lists – which 26 have now done – as well as getting municipalities to pass ordinances restricting neonicotinoid use. On top of all this, she says that, “Through the Xerces Society’s Pollinator Conservation Program, we have worked with the USDA Natural Resources Conservation Service and private landowners to restore pollinator habitat for the rusty patched bumble bee and other bees on hundreds of thousands of acres.”

Jepsen says the race against extinction is well and truly on for the rusty patched.

“This species is on such a declining trajectory that we’re really racing against the clock. We need to immediately protect all known populations of this species from the threats that they face, identify new populations, and improve habitat within this species’ historic range so that it can fully recover.”