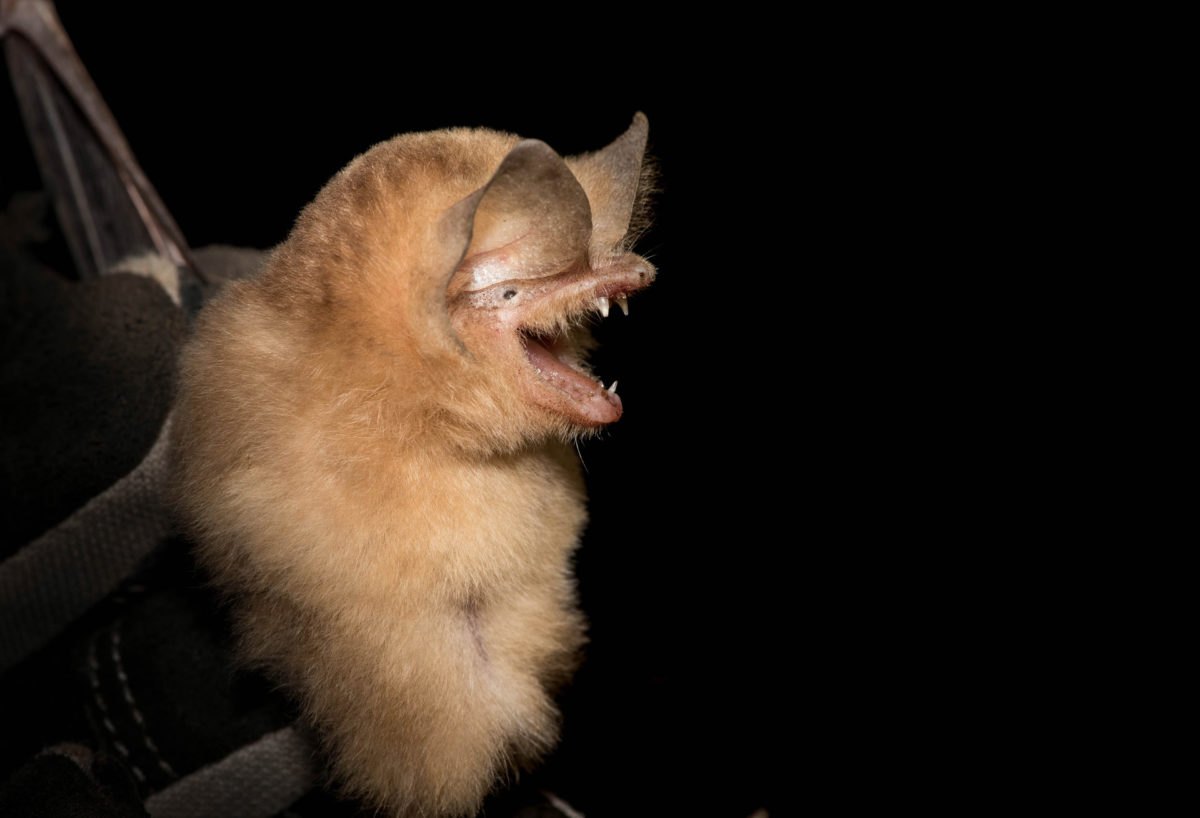 Hanging from the roof, delicately, the Cuban greater funnel-eared bat prepares itself to leave in flocks from the cave, beginning its nightly ritual to gather and hunt.

About the Cuban Greater Funnel-Eared Bat

Natalus primus, or the Cuban greater funnel-eared bat, has only recently been rediscovered after previously having been thought to be extinct. The species is endemic to Cuba and is currently known from just a single cave – Cueva la Barca on the far western tip of the country. From the order Chiroptera, meaning “hand-wing”, and the family Natalidae, meaning “funnel-eared”, the bats are known for their slender bodies, as well as their unusually long tails (Mancina 2016).

Their most prominent feature, as their name suggests, is their ears which are akin to funnels. The Cuban greater funnel-eared bat is quite small, ranging between 3.5 to 5.5 centimetres in length, most commonly of a brown, grey or reddish fur.

Like most species of bat, the Cuban greater funnel-eared has a diet which consists largely of moths, crickets and beetles, as well as any small insects scaling the cave walls (Mancina 2016).

The bats’ chosen caves are known as ‘hot caves’ with near 100% humidity and temperatures sitting around 40-degrees Celsius. Dr Oliver Wearn, a conservation scientist who works on ZSL’s EDGE of Existence (Evolutionarily Distinct & Globally Endangered) programme (of which this species is one part) elaborated on this point:

“The high humidity and temperature is partly maintained by the heat of the bats themselves, but also the decomposing guano [bat droppings] on the cave floor! We don’t know why they need these conditions, but it could be something to do with their breeding biology and the conditions needed by the newborn bats. There is still lots to discover about this unique species!” This species is unique from the natalids family, evolving independently on the tree of life for approximately 50 million years according to Dr Wearn. However, the species’ numbers have been declining dramatically, for reasons which can be assumed – though not proven – to be primarily due to their limited extent of occurrence to a singular cave, as well as their restricted numbers.

“From fossils, we know it was previously found in lots of other places in Cuba, but has undergone a massive decline more recently. We know that this happened for lots of other bat species in Cuba and the Caribbean as well, with many faring even worse and going completely extinct (~20% of bat species). This still remains a big mystery for the Caribbean region. Through clearing habitat, there is no doubt that humans have had a large negative impact on the species.”

It is assumed that habitat clearance has driven this decline, due to the caves they previously inhabited having conditions change to that in which the bat cannot survive. Additionally, says Dr Wearn, the repeated and natural changes in sea level and climate have potentially played a part in the decline.

Dr Wearn says that most of Cuba’s lowland forests (where the bats endemic to the caves habituate) have been cleared for agriculture, and this clearance continues to this day.

Tobacco and sugarcane growth are the two largest contributors to the loss of natural land in the region, but the newest threat to the species is, perhaps, tourism. The US and Cuba have created many relationships in the past few years that have encouraged tourism in the country – particularly Cuba’s natural landmarks and caves. Considering the only known location for Natalus primus lies about 500m from the coast, it is fortunate that the area resides in a national park. However, risks do include changes in the structure of the forests around the cave, perhaps due to logging, and simply its small population size which creates an inherent vulnerability.

Because numbers are so low in the wild, and there is much still undiscovered about the species, there are no real rehabilitation or conservation efforts currently underway. However, Dr Wearn says that the EDGE of Existence Programme at ZSL is hoping to develop this at some stage.

“Nothing is currently being done to actively rehabilitate this species,” he says. “Whilst this will no doubt be essential in the future, we still don’t know enough about the species to even know how to go about this. We need to understand how large the population is, what it requires and aspects of its breeding biology and ecology in order to devise something that will be really effective.”

Dr Wearn points out that whilst this is the case, some conservation education programmes do exist.

“There is a consortium of Cuban bat researchers who are working together to increase knowledge about threatened Cuban bat species more broadly. We [the EDGE of Existence Programme (EDGE) at ZSL] are also hoping to develop a conservation project on this species in the near future with Cuban experts, so watch this space!”