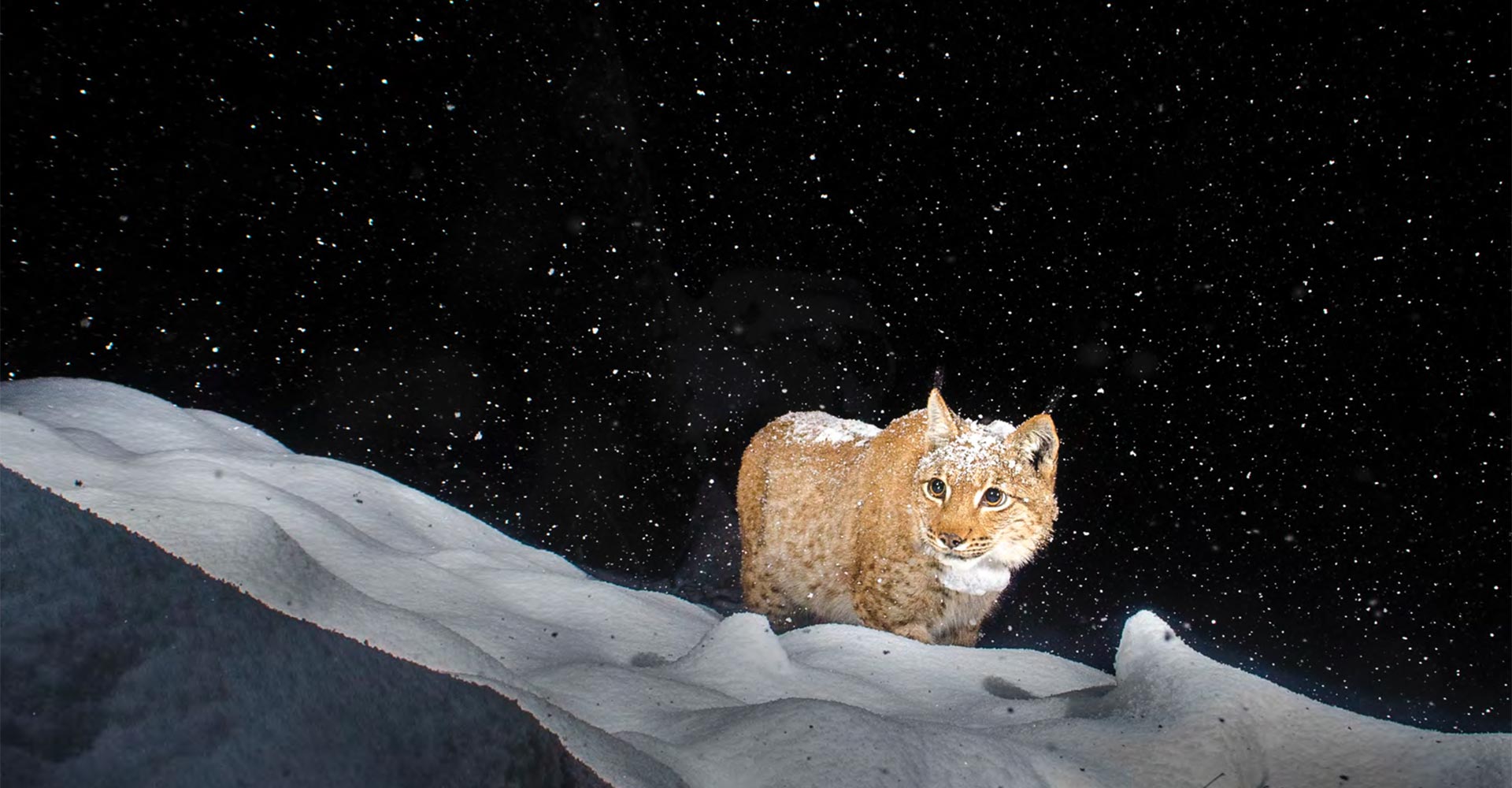 “We believe that a landscape over which eagles soar, woodland grouse display and trout and salmon fill the rivers, is a landscape in which people will prosper.” This quote from Anders Holch Povlsen grandly sets the scene for what is a riveting, thought-provoking collection of imagery and prose from David Hetherington and Laurent Geslin.

The first thing to tell you about this book is that, if nothing else, you should buy it for the photos. Truly, there may be no better compilation of Eurasian lynx images available in book form. Geslin deserves a major amount of credit for the breathtaking glory he invokes for this cat throughout the book’s pictorial pages, along with the featured photographers.

As for author Hetherington, his immaculate research, fair perspective and tantalising storytelling abilities make this a book for a diverse range of readers. As is its wont. “In what is nothing more than a geological blink of the eye, we have changed Scotland’s landscape beyond recognition,” writes Hetherington at the start. “The wild forest that once reached into every highland glen is now a mere memory, as are the ghostly shadows of a secretive, crepuscular cat.”

And with that, The Lynx and Us takes you on a journey of discovery, revealing truths about the species unbeknownst to many, and debunking myths that severely hinder some of the public’s ability to embrace this special predator.

The author is at pains to cover historical facts whilst fairly conveying social sentiments in the regions discussed. What particularly struck me was the attempt to cover every angle fairly, even when it seemingly dented the argument for reintroduction. This can only hold SCOTLAND: The Big Picture (the book’s sponsors) in good stead when approaching potential discussions with the wider public. The Lynx and Us begins by talking us through its aim: to educate the people of Scotland on a potentially exciting decision, before going into details about the Eurasian lynx. After all, as the author notes, the bear and wolf are the other large predators to vanish from the British countryside, and they are both well known to most people. The lynx, however, is more of an enigma, which comes with its own unique problems. Ignorance breeds fear.

After detailing different aspects of the lynx life cycle, Hetherington goes into detail about the persecution and population declines of lynx throughout medieval Europe. It’s particularly enlightening to see just how similar that era was to modern-day persecution of certain species, perhaps with an added grunt of ignorance that the internet, charities and, indeed, books like this one, help to avoid in the 21st Century.

At one point Hetherington writes: “The last individual lynx of the Harz Mountains succumbed in 1818 at the end of an 11-day hunt involving almost 200 men. The passing of these last lynx was often an event worth marking or celebrating and inscribed ‘Lynx stones’ were erected in several landscapes to mark the places where their last lynx were killed. The successful hunter of these semi-mythical beasts would often tour his local area showing the carcass and earning tips from the grateful locals.”

It is with despair that this type of sentiment rings true with our modern treatment of wildlife.

The next section runs through reintroduction attempts, and why or why not some of them were successful. This is an important development in people’s education: lynx are introduced elsewhere and the benefits have far, far outweighed the negatives. This is critical information for a concerned or confused populace that will, in the end, have a large say on whether a local reintroduction will be successful. After that, the book flows through impact and interactions with the species. What are some anecdotes of attacks on humans or pets? There aren’t many. How about on domestic animals? There are a few more.

And the compelling part of this book is that figures aren’t skewed. There isn’t a blatant attempt by the author to sway reader opinion on the impact the lynx has on farming across Europe. 200 sheep killed a year in Switzerland? He highlights it.

Herein lies the point of the publication: unadulterated education on the species to enable a more informed public discussion on the best way to reintroduce a cornerstone species into the ecosystem whilst keeping everyone onside.

Hetherington makes some critical points around lynx hunting and the effect on habitat. It would seem that alongside wolves, lynx do work in some sort of landscape predation methodology associated with now-famous research out of Yellowstone. However, alone – as they would be in the UK save the introduction of wolves – they have less of an impact. He writes:

“In eastern Poland, lynx and wolf predation are thought to operate in tandem to keep roe populations markedly below the carrying capacity of the habitat. However, in a high-density (>20/km2) roe deer population in Switzerland, where lynx were the only large carnivore, they killed only 4% of the population.”

One beautiful part of this book is its ability to tie factual and historical data in with genuinely surprising elements of this charismatic animal. At one point, Hetherington highlights the less-predictable, though potentially deliberate, nature of the lynx:

“In fact a single lynx had killed three foxes consecutively on the same track, without eating any of them. This waste of carcasses is unusual for lynx and suggests some lynx kill foxes to remove a scavenger, but perhaps don’t eat them because of the risk of contracting disease.”

So, after an exhaustive description of the lynx, its presence across Europe, the outcomes of other reintroduction attempts and possible impacts, Hetherington talks us through what the project would look like in Scotland. It is these last few chapters that bear the weight of the cover, and that leave one thinking of what, within a generation or so, a walk in the Highlands could entail.

Could this be a future home for the Eurasian lynx, as it once was?

“Today there is irrefutable science backing the vital ecological role of large carnivores in maintaining intact living systems. Predator-prey interactions, carcass scavenging and nutrient cycling are all either limited or in some cases missing across much of the Scottish landscape, contributing to the sobering realisation that we live in one of the most ecologically depleted nations on Earth.”

“In most parts of Europe, attacks by lynx on livestock are relatively few and conflicts are correspondingly small in scale. The only part of Europe with major issues around livestock depredation, specifically affecting sheep and semi-domestic reindeer, are the Nordic countries. Elsewhere in Europe, it is the lynx’s predation of wild prey which puts it in direct competition with human hunters and that generates the most intense conflict, often leading to its persecution.“

“By allowing top predators to come back, we restore natural processes, such as predation, anti-predator behaviour and the provision of carcasses that would once have shaped and driven our ecosystems for thousands of years — and can enrich them once again.”

“Snow tracking and camera traps tell us that many species make use of the carcasses left by lynx. In terms of mammals, these range from large carnivores such as wolves, bears and wolverines, to the red fox, which in many areas is the most common scavenger of lynx carcasses. As there is an inherent danger in interfering with a larger predator’s meal, foxes will often wait until the lynx has completely finished with a carcass. However, they are also known to sneak in and feed on the carcass when the lynx is resting nearby. The badger, pine and stone marten, polecat, raccoon dog and wildcat are all also known to scavenge on carcasses provided by lynx.”

“For some, returning large carnivores to former haunts after an absence of several human generations is a welcome reversal of fortunes; an atonement for past sins that brings with it both ecological and economic opportunities. Others see it as society unwisely turning the clock back and presenting challenges for people who make their living from the countryside. Both views are valid and where lynx exist, the trick must surely be to maximise the opportunities while minimising the threats. The latter often means having to build trust between groups of people who are suspicious of one another — something that requires hard work and, very often, compromise.”

You can purchase The Lynx and Us direct from SCOTLAND: The Big Picture via this link.

You can support photographer Laurent Geslin’s work by visiting his website here.

Interview with Bill Laurance: A Life of Fragmentation