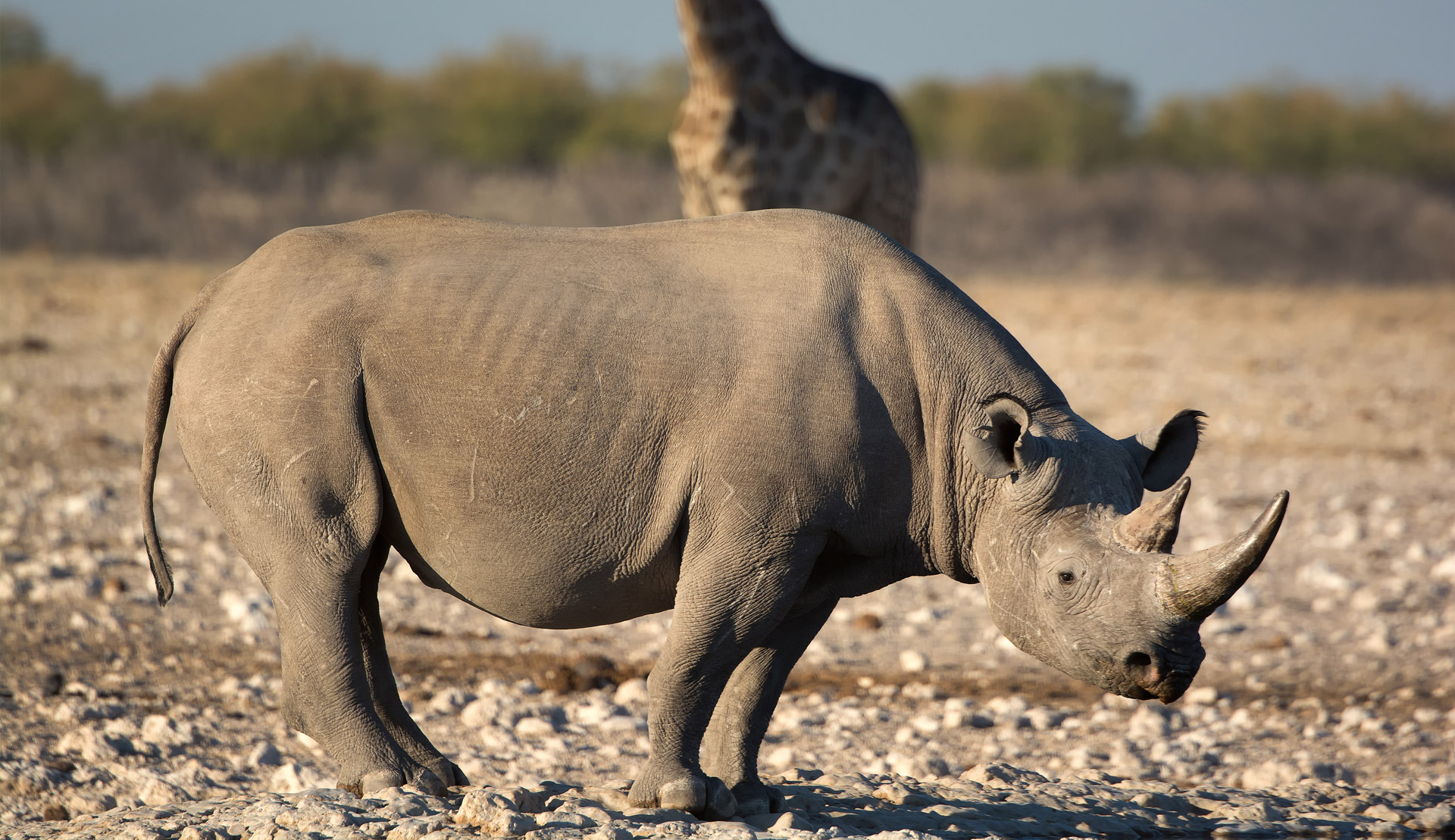 It is this story that has become all too common for the species as it struggles to recover from dreadfully low numbers in the 1990s.

About The Black Rhinoceros

Encountering black rhinoceros (Diceros bicornis) in sub-Saharan Africa was once an easy feat; although solitary animals, it was not uncommon to sight upwards of 12 individuals in a single 24-hour period. It is estimated that at one time, there may have been upwards of 850,000 individuals. By the 1960s, there were around 100,000, and by 1995, the future of the species seemed bleak when a mere 2,410 remained. While numbers are increasing, with about 4880 individuals by the end of 2010, a high demand for rhino horn on the black market sees poaching remain the black rhino’s largest threat, and ensures their listing as critically endangered by the IUCN is to remain for some time to come.

Contrary to what the species’ common names may suggest, black rhinoceros and sister species white rhinoceros (Ceratotherium simum), are not discernible from one another due to their colour, as both are a pale shade of grey. The primary difference between the two comes from their lip; black rhinos have a prehensile lip adapted to plucking foliage, fruits and twigs with ease. It is this feature that sees them often being referred to as the ‘hook-lipped’ rhino. Contrasting this, white rhinos have a square lip ideal for grazing on the grass of the flat African plains. It is estimated that the two ungulate species diverged from one another between 4 and 5 million years ago.

The arrival of Europeans was the unfortunate beginning of their demise as they were hunted for food and, often, simply amusement. A further influx of Europeans arriving early in the 20th century saw the hunting continue: as agricultural developments and plantations were consumed by black rhino, frustrated settlers began considering them pests needing to be exterminated. It was in the 1960s that they became widely recognised as a source of wealth, and poaching in order to obtain the horn of the animals intensified. Rhino horn can fetch upwards of $350,000 on the black market, the hefty payout enticing trophy hunters and causing the dramatic decline of numbers seen between the 1960s and 1990s.

As population numbers diminished rapidly, a ban on rhino horn trade was introduced in 1977. Despite this ban, the decrease continued, and in 1983 sanctuaries for black rhinos were created. However, illegal poaching remains the largest threat for the mammals: their size, weighing upwards of 1000 kilograms, is unfortunately conspicuous in the burnt landscape of Africa.

“I assist in designing, planning and implementing AWF and our key partner activities to protect rhino in their natural habitats; our goal being to conserve viable and ecologically-functional populations of the species.”

One of Muruthi’s main roles is assisting field teams, ensuring they have necessary and sufficient resources in order to protect the species and their habitats.

“I am very keen on knowing that the rhino themselves are present and safe hence I work with field teams to record, collate and analyse population data to decipher trends in numbers and age/sex classification.”

In addition to consistent and continuous contact with those in the field, a relationship with government authority is maintained in order to ensure the infrastructure of sanctuaries are kept in perfect working condition. This includes components such as fencing, water supply, road networks, offices, ranger houses and camps.

One of the main sanctuaries with close associations to AWF is the Ngulia Rhino Sanctuary in Tsavo East National Park, Kenya. AWF’s involvement in this sanctuary began early in the 1980’s, and over this time the rhino population has grown more than ten times.

“(We) support anti-poaching, park infrastructure, species monitoring, community engagement – all needed for a successful conservation program,” notes Muruthi, who has been a member of Kenya’s national rhino management committee for more than ten years.

The partner efforts between AWF and Tsavo have been particularly effective. The evidence for this comes from how well the rhinos, elephant and other species’ populations have done, as observed by Muruthi and others involved in the sanctuary. Despite this, challenges persist, demanding determined efforts.

The largest threat to the black rhino, amongst other endangered African species, is poaching. Muruthi says: “we are in a poaching crisis continent-wide”.

With anti-poaching laws proving to be unsuccessful, success is heavily dependent on active field conservation and sanctuary work, as well as engagement from the public, which he explains can occur on several levels.

“(This includes) contributing resources/finances, being good ambassadors for the conservation message, directly protecting the habitats, reporting suspicious cases at site levels, and not getting involved in trafficking and demand for rhino horn.”

It is not entirely effective as challenges change and the foundation and its staff have to keep adapting strategically. It is also not the only threat rhino face.

“In some cases,” Muruthi continues, “habitat quality and availability are challenges related to the fact that rhino are heavily protected and some suitable areas are excluded by insecurity at the moment.”

Black rhino are entirely conservation dependent, which makes determining their future difficult, particularly at this time when poaching and trafficking continues to increase. Muruthi maintains that the changing nature of these crimes, including spreading and intensity, requires all those involved in rhino conservation to remain vigilant.

“Only with concerted efforts will the populations of black rhino – indeed all rhino – continue to grow. Growth is much needed for all rhino populations as they have suffered much decline recently and historically.”

The dedication and passion evident from Muruthi and the team provides much-needed hope for future.

“Rhino are resilient animals and will [certainly] survive beyond this current crisis as they did the one before it. All humans owe the rhino its continued survival,” says Muruthi, before commenting: “Our own survival is linked to healthy ecosystems that rhinos are a part of and help to maintain.”