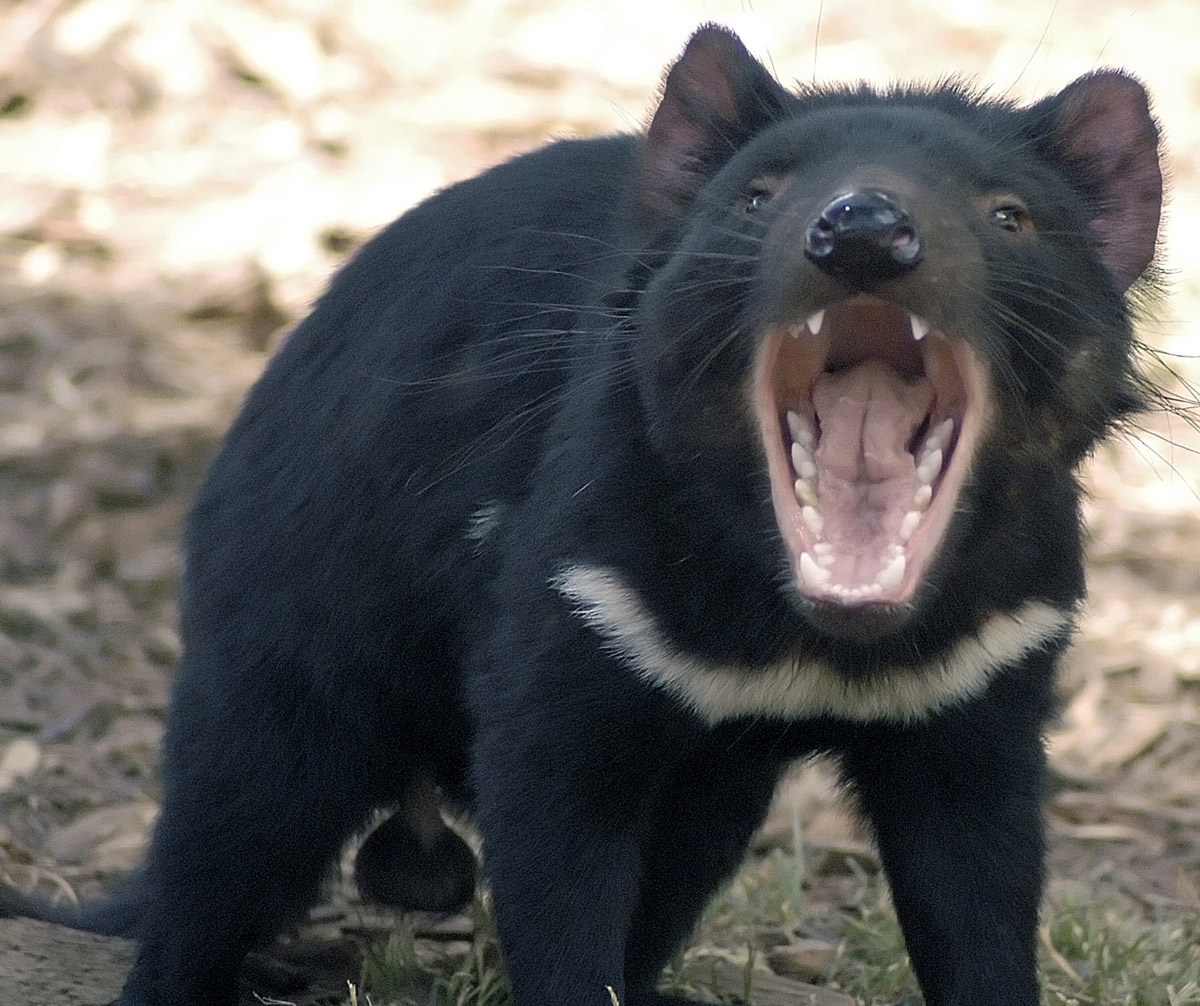 About the Tasmanian Devil

The Tasmanian devil (Sarcophilus harrisii) is Australia’s largest carnivorous marsupial, weighing up to ten kilograms and with a bite stronger than that of a Bengal tiger.

It is currently listed as Endangered by the IUCN predominantly due to the incidence of Devil Facial Tumour Disease (DFTD). The IUCN predicts a population decline of up to 70% in the next ten years if current rates of infection and mortality continue.

Tasmanian devils were so named by the first Europeans to visit Tasmania because of their incredible volume and frightening calls. As the Devils have such powerful bites, the calls act as a bluff to avoid conflict with other Devils and lessen the risk of injury.

Listen to the sounds of Tasmanian devils:


Tasmanian devils feed predominantly on carrion they scavenge in the bush. Their powerful jaws allow them to crush bones with ease and quickly finish off a carcass. In the past, Tasmanian farmers believed the Devils posed a risk to their sheep and placed a bounty on the species. This resulted in a population crash, which took the Devils approximately thirty years to recover from. We now know that they will rarely, if ever, attack a live animal and much prefer carrion.

Their preference for carrion puts them at risk of road mortality when feeding on a carcass on the side of a road. This is one of the major threats the Devils currently face.

The species fits in a select group of animals known as marsupials – a mammalian infraclass known as Marsupialia. They give birth to tiny foetuses after only a 21-day gestation period. Mating usually occurs in March with the first pouch young emerging in about July. The female only has four teats in her pouch but will commonly give birth to more than four foetuses. It is rare that four young will survive to weaning though – usually, a female is only capable of raising two or three at a time. Not much is known of the Tasmanian devil’s life cycle, but it is estimated that both sexes begin breeding when they are two years old.

According to fossil records, Devils were once found across mainland Australia. Approximately 40,000 years ago, they became extinct on the mainland and are now restricted to the island state of Tasmania. It is thought that the Devils’ extinction from the mainland coincided with the arrival of the Australia’s largest carnivore, the Dingo. Many factors may have led to the Devils’ dramatic range restriction, but the Dingo hypothesis appears to be favoured.

Threats to the Tasmanian Devil

Roadkill is a significant threat to all animals in Tasmania. Tight, twisty roads with poor lighting combined with a high density of animals and people who are not used to driving in these conditions is a recipe for disaster. As carrion feeders, Devils tend to see roadkill carcasses as an opportunity. They will often be found feeding on the carcass of a wallaby or other small marsupial on the roadside. This behaviour puts the Devils themselves at risk of being hit by a car. In a 2015 trial release of 39 vaccinated Devils, nine were killed by cars in just one month.

A study conducted by University of Tasmania’s Associate Professor Menna Jones showed that following the upgrade of the Cradle Mountain Tourist Road, mortality of Devils and Eastern quolls increased, as drivers were able to drive faster with confidence. Immediately, actions were implemented to reduce the roadkill rate including implementation of slow points, tunnels for wildlife, and light-reflecting devices. Combined, these measures allowed the rate of collisions to decrease to sustainable levels.

Habitat loss is also a major threat facing the Devil population. As Tasmania increases in popularity as a tourist destination and the human population expands, greater pressure is being placed on wildlife. Tasmanian devils require an extensive home range in which to scavenge for food and to find a mate. Increased habitat fragmentation is making it difficult for Devils to connect for breeding.

The biggest and most important threat the Tasmanian Devil currently faces is the invariably fatal Devil Facial Tumour Disease (DFTD). DFTD is spread through the population when Devils bite each other around the mouth during social interactions.

DFTD is a contagious cancer that spreads through the Devil population via biting in social interactions. The cause of the disease is unknown and, as of yet, there is no known cure. Invariably fatal, DFTD has caused an 80% decline in the Devil population in the 20 years since its discovery.

Intriguingly, the disease is causing the Devils’ population structure to change. Before DFTF, the Devil population had a similar number of individuals in each age category, but now it is becoming skewed towards younger Devils as they have not yet been hit by the disease.

This has resulted in a change in the life history strategies of the Devils as well. Typically, a female Devil will not breed in her first year, but with the onset of the disease and the number of older Devils decreasing, more and more young females are breeding. Unfortunately, this puts them at greater risk. In mating interactions, males and females will usually bite each other around the mouth. It is partially this biting that spreads the cancer and results in the onset of the disease.

There has been some hope recently that the Devils may be evolving resistance to DFTD. A study led by Associate Professor Menna Jones of the University of Tasmania identified two genomic regions that showed a change in genetic makeup. In other mammals, those genomic regions are associated with cancer and immune function, so it is likely that they serve the same purpose in this species.

Based on this finding, the researchers are cautiously optimistic that the Devils are evolving some form of resistance to DFTD.

Unfortunately, Tasmanian devils are on track to be listed as Critically Endangered in the near future. This puts them at high risk of extinction. In order to combat this, several organisations are working to conserve the Devils and ensure the population survives the deadly DFTD.

Within the insurance population programs, some Devils are being trained in road avoidance. It is hoped that this will teach Devils to stay away from roads when they are released and lessen the impact of road mortality on the population.

While the immediate future for the Tasmanian devil seems bleak, there is some hope. Many dedicated organisations are working hard to conserve the species and keep them wild for future generations.

Related Topics:AustraliaEndangered Species
Up Next