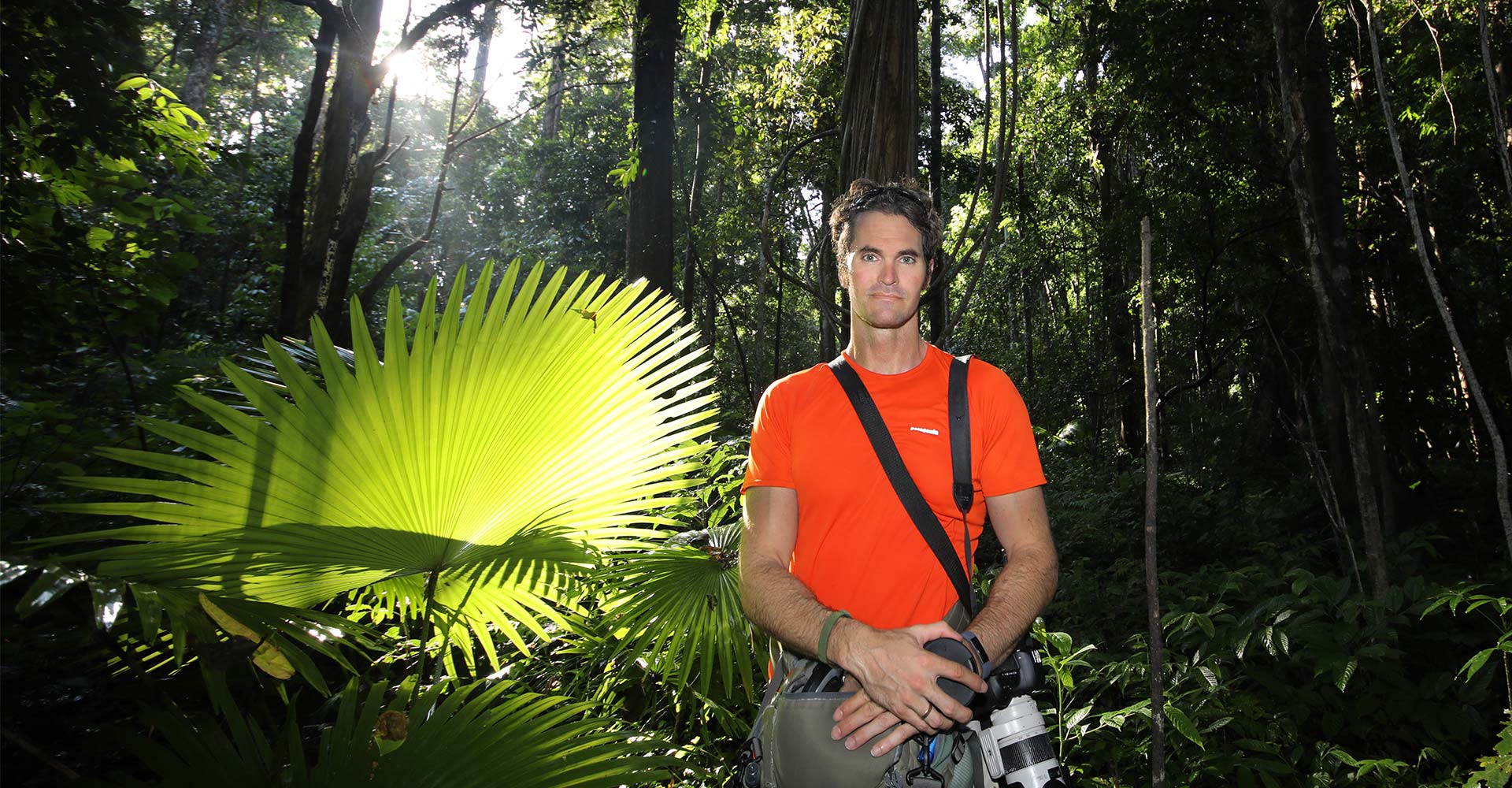 To be honest, when reading his answers, I imagined him perched on a wooden deck overlooking a lush rainforest that he just saved. More realistically, he was probably knee-deep in papers, working on Mongabay’s next big conservation move. But the ever-inspirational Rhett Butler was kind enough to take some time to answer a few questions for Conjour.

Rhett Butler, for the uninitiated, is the founder and driver of Mongabay – a conservation organisation that is known for its investigative journalism in the environmental field – with over 2.5 million readers a month. They also fund projects around the world, and publish articles in half a dozen languages. Their primary focus is on rainforests and so, naturally, I asked the man behind it all how he came about his love of these critical ecosystems.

“I’ve always been very interested in herps: reptiles and amphibians. As a kid, I’d look through field guides and the coolest frogs and lizards often seemed to be in the rainforest, so I started to learn more about places like the Amazon, Congo and Borneo,” he says.

“I was intrigued by the complexity of these ecosystems and how every species seemed to play a part. As I became more passionate about rainforests, I grew more concerned about their fate, including the threats they face.

Butler says he was fortunate in that his parents’ jobs enabled family trips. “Because I had the special interest in rainforests, I was always lobbying to visit the tropics, which I thankfully had the opportunity to do a few times. And visiting the rainforest in real life got me even more interested and engaged.”

Butler evidently has a real affinity for the island of Madagascar (who doesn’t, right?), and says his first couple of trips there cemented the love affair. He even has a side project from Mongabay dedicated to the island: Wild Madagascar.

“With its incredible assortment of weird plants and animals, Madagascar had always been a dream for me as a kid. In high school I started saving up from my after school/summer job so I could eventually visit. That opportunity finally came in college.

I signed up for an Earthwatch trip to help a researcher who was studying lemurs on a small island off northern Madagascar. After that field work, I spent several weeks traveling around Madagascar. The trip was a disaster, starting off with me getting robbed of everything I had my first night in the country and only getting worse from there. But I also was amazed by the wildlife, landscapes, and people. “A few years later, I decided to return, figuring that a second trip couldn’t possibly be worse than the first. That trip was also pretty rough, but again I had an incredible journey.”

Butler says every trip since then has improved and the people doing amazing work, along with the lemurs, chameleons and frogs, keep pulling him back.

But since those lofty days getting robbed in Madagascar, the world has come a long way. And in conservation terms, that hasn’t always been good. I asked him what the biggest changes are that he’s seen.

“We have a much better understanding of what’s happening to wild lands. Between satellites, on-the-ground sensors, and ubiquitous cell phones, we no longer have the excuse of saying we don’t know what’s happening to the world’s rainforests, oceans, and wildlife populations. So the data is there, but we still lack the will do to something about it, which is sad.” Butler, however, admits later on to being an optimist, which shows when he continues in a lighter tone on the changes he’s seen.

“There are certainly some other positive developments, however.

“The world is recognising the important role local communities and indigenous peoples have in stewarding wilderness areas and wildlife. More conservation dollars are now going to help these communities secure their traditional lands. There’s also a movement toward valuing the services afforded by ecosystems like forests.

“That’s important because when decision-making at the government level is driven primarily by economic arguments, it’s quite useful being able to point to the high economic values of ecosystem services.”

“And finally,” he adds, careful not to miss any good news and evidently a scientist at heart, “I feel that there’s greater focus on the efficacy of conservation efforts. Funders, practitioners, scientists, and others are putting more emphasis on evaluating what works – and what doesn’t work – in conservation. That’s really important since conservation dollars are scarce.”

Mongabay made the big jump a few years back to being a not-for-profit organisation, which Butler notes has good and bad points for him as the director.

“Shifting to a non-profit model has enabled me to greatly expand the scope and ambition of Mongabay, which has been wonderful. I have an awesome team that is dedicated to doing great original reporting on conservation and environmental science news. I have to admit that it’s less fun having to give up what I most enjoyed doing at Mongabay – producing content – but moving to the ‘business’ side has enabled me to focus on expansion, which generates more resources for the organisation to do good work.” As for what’s coming up, Butler says it’s only getting busier.

“We just launched a couple of major new initiatives: video and a bureau in India. Both of those are potentially huge new markets. We have a ton of other things planned as well, so there’s never a dull moment.”

In amongst habitat destruction (his biggest concern), rising populations and excessive consumption, Butler highlights habitat degradation as a massive problem.

“It gets a lot less attention because it’s harder to see, but degradation is often the first step toward outright destruction. Fire, hunting, fragmentation, and extractive activities like logging are major sources of degradation.”

But around the world work continues to get done to move us towards a healthier, more sustainable, environmental society, and Butler keeps his eye on that sort of thing.

“My favorite conservation project,” he says, “is Health in Harmony/Project ASRI, which operates in Indonesian Borneo. It has an innovative model that combines healthcare, education, conservation, and organic agriculture. I’d love to see it replicated in other places.”

What else looks promising in the eyes of Rhett? I hear you ask. Well, I asked too.

“I’m really excited about the potential of bioacoustics for monitoring biodiversity. It could open up a whole new frontier for real-time monitoring, especially when combined with other technologies like satellites and camera traps.

I mentioned above that Butler claimed to being an optimist, but it came with a caveat.

“I’m an optimist by nature, but it can be frustrating to see how slow we’re progressing, and the past year has been particularly hard with the U.S. abandoning leadership on anything related to the environment or conservation.” He also lists “the large-scale fires and devastation of forests around the world, and the continuing assault on environmental defenders,” as worrying developments.

So, does he believe we can right our wrongs?

“I do believe we can turn things around, but it requires more people to start to take these issues seriously.”

Rhett Butler is the founder of Mongabay. Check out their website to see more about their work and to lend your support!

All images in the article “How to get robbed and save rainforests – interview with Rhett Butler of Mongabay” are courtesy of Rhett Butler. All Rights Reserved, 2018.

Interview with Bill Laurance: A Life of Fragmentation