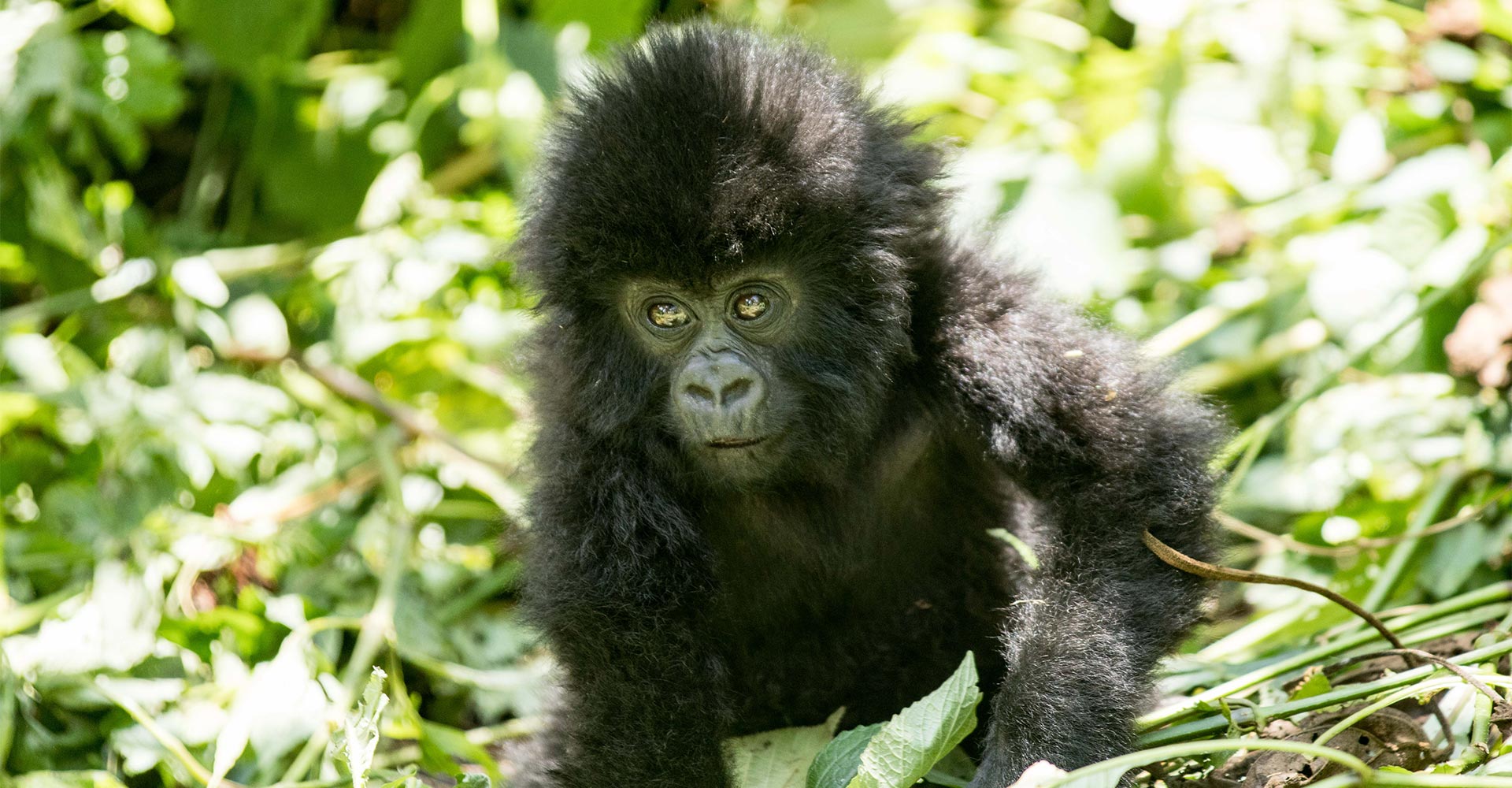 The Congolese Silverback gorillas are amongst the largest of the primate family. Wildlife photographer Alice Peretie ventured deep into the Congo jungles to find these special animals, and see what humans have been doing to their population. She tells Conjour about the trek.

It’s hot. “Ants! Ants! “ yells Pierre, the head of the gorilla tracking ranger unit. We start running through the leaves, the trees, the vines deep into the forest. After a few minutes, we stop to check ourselves. Ants are climbing up my legs, biting through my trousers, my t-shirt, digging into my skin.

We brush them off, stomping and shaking ourselves.

We’d been macheting and trudging relentlessly through dense Virunga forest, tracking the trackers who were following the family we were looking for. Our radio, it turns out, was broken. We relied only on Pierre’s knowledge of the Bukima Sector and of gorilla behaviour.

Initially, the Rugendo family had been spotted less than an hour away from the Bukima Patrol Post. “An easy hike,” I thought, almost disappointed at the idea of finding them that quickly. Little did I know that my quench for tracking, trekking and exploring was about to be satisfied.

After more than three hours of dodging monster ants, sweating, beating down vines and branches, and finally reuniting with our trackers, one of them suddenly stops dead. “Ecoutez” (listen), he says. We hear soft noises emerging from the bamboo thicket. Pierre looks at us, smiling broadly.

“Il faut mettre les masques” (It’s time to put on our masks.). Bringing a finger to his lips, he motions us to move slowly towards the thicket, through a freshly macheted pathway.

I gasp. I have my camera around my neck, with a 70-200 f/2:8 lens, and I tremble slightly as I arm for the shot. A huge silverback is tranquilly munching away at bamboo sticks, 3 metres away from us. A massive, 200kg, gentle but great ape is there, so close to me, royally ignoring the group of intruders who have just barged in on his meal.

The focus is hard to get with the thick foliage, but I manage to get a few solid pictures. The sun makes exposing for the shot tough, with the gorillas being so dark. But other things were more important than taking pictures right now. The timer is set for an hour, and I want to make the most of this privileged encounter.

The rangers beckon me to advance further, passing through the thicket, only to emerge into a small sunlit clearing. Another gasp escapes me. Two babies – one of seven months – and a much larger one, are playing around in a very human-like way. A female joins in and they start cartwheeling and rolling all over the clearing. They look at us inquisitively, wanting to play.

“Mhm rhmm!” – the rangers make a deep sound, as if they are clearing their throats, to speak to the gorillas as a reassuring warning to stay back.

Another noise, from behind me, makes me spin around. A ranger just cut a little passage towards another thicket, a few metres away. There stands Bukima, one of Virunga’s most famous males. He is bigger than my first encounter, much more impressive. He sits there, in the shade, on a higher part of the clearing, dominating the rest of us as we look up to him. We’re crouched in a humbled position, awed by the clear power emerging from him.

More noise, the babies are messing around again. My heart melts every time the youngest one looks at me. How could anyone harm such a creature, I think to myself.

On the morning of 24 July 2007, five gorillas from this family were shot dead, including Senkwekwe, the Rugendo alpha male. The idea behind gorilla poaching was that, with no gorillas to protect, the National Park would have no purpose, therefore no point in existing. Estimated at a value of $2 billion dollars, the revenues from converting the Virunga forest into acres and acres of cultivated land for agriculture would mean the four million people living around the park could gain on average $600 a year (Virunga National Park, 2017).

Yet the murders caused an uproar amongst the locals. Since that day, the Virunga silverback gorilla populations have been thriving, with close to 1000 individuals estimated to this day, more than half of which can be found in the Congo.

There are nine families in total in the Bukima Sector, four of which are habituated – this means they have become entirely indifferent to humans sitting close to them. The families usually comprise around 7-10 individuals, each of which has an alpha male. They play a key role in their ecosystem through their large bamboo and vegetation grazing habits. Gorilla loss would disrupt a primary barrier against climate change – the Virunga Forest, as well as other wildlife behaviour, potentially impacting human activities like agriculture or freshwater management (WWF, 2017).

As highly sociable creatures, they can also display stunning levels of what we would interpret as intelligence. For instance, a few days ago, Virunga National Park reported that alpha male Bukima had calmed the other members of his family who had risen up to protect an injured gorilla from the rangers and vet who had come to help it. According to VNP, he established a perimeter of security around the rangers, to ensure they could proceed. Additionally, it has not been unheard of gorillas mourning and burying their lost ones, much like elephants and, indeed, humans.

Encountering the Rugendo family was a true privilege. Currently sized with nine individuals (4 silverbacks, 2 females, 2 babies and 1 juvenile) this family suffered terrible massacres from 2007 onwards. Despite that sadness, it was beautifully touching to see how the Rugendo gorillas still trusted rangers and visitors despite having gone through so many losses.

Emmanuel de Merode, Virunga’a chief warden for the last 20 years, has patiently and slowly created a safe enclave in one of Africa’s most unstable regions. With a view to making conservation about people, he has succeeded in gaining the trust of the neighbouring communities via progressive, sustainable development programs enabled by tourism and conservation. By bringing clean electricity, powered by the hydroelectric plants he’s building using the water from Virunga’s mountains, he’s brought safety after dark. He projects to create close to 150,000 jobs by 2022. Sustainable fishery and agriculture plans, intrinsically tied to the hydroelectric plants, are equally in action to bring revenue, employment, and community-led development to this part of Eastern Congo (Virunga National Park, 2017).

Seeing how stability and flourishing ecosystems have become possible due to smart conservation and sustainable development is possibly one of the most encouraging things to observe. Virunga deserves all of the tourism – meaningful, responsible tourism – it can get, and it was an absolute privilege to spend a few days in this unspoilt place. Conservation by and for the communities seems to be the winning strategy, whereby gorillas are slowly becoming an icon for the people in the Kivu region.

All images credited to Alice Péretié, 2017. All rights reserved.