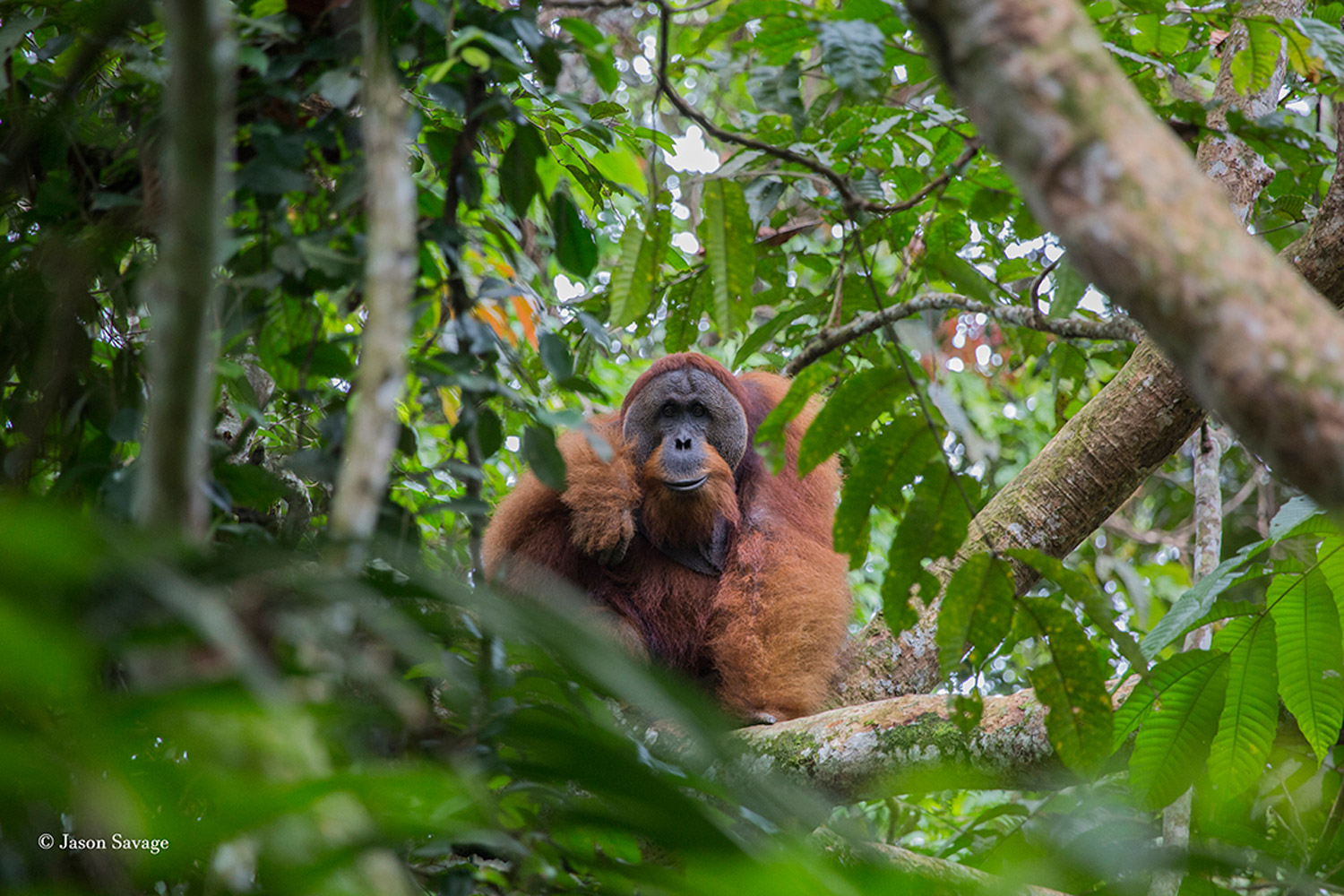 Spending many nights out in the African bush really allows you to use all the senses, as sound travels further at night. One minute you’ll be sitting there with not even a cricket chirping, then the next second there is a leopard calling some 100 metres away.

I always think back to a documentary I watched called Racing Extinction, where Dr Christopher Clark from the Cornell’s lab of ornithology said, “The whole world is singing. Clicking, grinding, whistling and thumping. But we’ve stopped listening.” This is true, as everyday noises of a flowing motorway, the sound of power tools on the job site or just having the TV on has overpowered our hearing and become the norm.

When people come back into nature to escape the daily routine of life, it takes a while to hone in on the sounds around you – both near and far away.

Coming to Sumatra was no different. Sitting on a veranda with a cup of coffee, the Leuser National Park is right across a beautiful and flowing turquoise river. Insects are going mad, but all of a sudden the real show begins. The sound of Sumatra plays back and forth like a tennis match as the local White Handed Gibbons and Siamangs start a vocal battle over territory, which goes on forever. It’s a beautiful sound and I have no idea who the winner is. Adapting to the Land

I’m on the Indonesian island of Sumatra, the sixth largest island in the world, learning about the conservation efforts that are going on here to protect some of the richest jungle left on the planet. I’m with the team from RAWildlife Encounters and The Rangers of Tangkahan to learn about this jungle paradise and the efforts going in to make sure it stays intact.

RAWildlife offers eco-tourism and wildlife encounter holidays that focus around conservation. Being a part of the group I could see everyone was having an amazing time and I was learning so much in this new environment. We even saw four Orangutans in the wild at Bukit Lawang, on my first day.

That is something I’ll never forget, as they moved effortlessly through the canopy. It was a great introduction into jungle life before going trekking and documenting with The Rangers of Tangkahan.

Walking into the jungle the sounds of the insects are almost deafening. The faint call from a rhinoceros hornbill can be heard as it flies away in the distance and the sound of your walking boots standing in the squelchy, watery mud becomes a common occurrence. I just wish there was a sound for when leeches attached themselves to your body, but no. That’s too much to ask.

After a short while we leave the cool, damp jungle. Taking only a few steps out of the Leuser National Park (the last place on earth critically endangered Sumatran Tigers, Elephants, Orangutans and Rhinos still coexist) everything changes. The air around me becomes more hot and dry, there is less shade and virtually all the noise was coming from behind us, back in the jungle.

The Problem with Palm Oil

The Rangers of Tangkahan and I were staring at a palm tree – hundreds of them, in fact. These weren’t just any palm trees that you find on a tropical beach somewhere – these were oil palms.

The palm oil trees are being grown and produced at such a rate, there are entire plantations dedicated to growing these trees and producing the fruits that then get turned into vegetable oil to be used in virtually everything from food to cosmetics. It’s hard to find something without palm oil in it.

This is the problem now facing most of Indonesia’s tropical forests: the insatiable demand worldwide for palm oil. A large amount of habitat is being cleared to make way for palm oil plantations because that’s where the money is. It’s being unsustainably produced which in effect is putting huge amounts of pressure on the jungle and its wildlife. Human-Wildlife conflicts are on the rise and are not looking like slowing down at all as the jungle is now fragmented and isolated, with populations now unable to reach other suitable habitats and new populations without crossing community land and the plantations which are set up right at the borders of the national park.

The Rangers of Tangkahan are a grassroots community conservation initiative, which focuses on the Leuser buffer zone. The buffer zone is the area next to the national park and the forest edge. I was really excited to be a part of the team and document what we saw. The rangers play a crucial role in protecting the jungle and engaging the local communities in conservation efforts. Teaching the locals about the importance of the jungle and the roles wildlife play in keeping a healthy balance can be a difficult task but the rangers were very good at what they were doing, chatting with the people and giving out important information.

The buffer zone was hot with little sun protection, but we soon found signs of wildlife. Head Ranger Jack found sun bear claw marks in a nearby tree, which went all the way up into the canopy. These bears could seriously climb. As we took a detour through the jungle to catch up with the rest of the rangers, we found some freshly eaten fruit on the ground. Jack said orangutans like eating this fruit and as we looked up we noticed that they were still up there.

A young mother and her sub adult infant started alarm calling and trying to move into thicker and larger trees. I had never heard an orangutan alarm call before. They place their hands over their mouth, suck in and then release their hand away from the mouth, which makes a kind of high-pitch kissing sound.

Whilst I was getting some photos, Pierman – another ranger – heard some more orangs behind us. It turns out there were three more: a big male along with two more sub-adults, all alarm calling and putting on a show. We decided to leave them alone.

Jack told me that these orangutans were so close to the forest edge because they knew that the trees were fruiting, but now they would have to cross the palm oil plantations and community land to get to them. This could lead them into big trouble with the locals as orangutans can eat a lot of the fruit that is one of the local people’s main sources of income and food.

Sumatra is a beautiful place with massive rolling hills, pristine jungles and amazing wildlife. But it’s being pushed to the brink by human related pressures. A never-ending race between coexistence and completely ruining millions of years of work that nature created. Amazing things take time to construct.

Poaching is still a big problem, which helps to fuel the demand in wildlife products and wildlife as pets. Numerous species are under threat and – as their land is cleared – many can’t escape. People are fighting to keep the forests beautiful and to find ways to get corridors to link between different areas so the wildlife has a way to move and stay out the way of people, which they’d much prefer to do, but it’s all a work in progress.

The sounds of the jungle will continue for a while. We just need to hope they aren’t drowned out by the noise of chainsaws.

While walking with the rangers we heard of a whole a lot of human-wildlife conflict situations and spoke to villagers who told stories of encounters with the animals. In the next instalment of my Sumatra series for Conjour, I’ll go through some of these stories and the solutions that we hope can benefit both people and wildlife.

Special thanks to Jess Mckelson from RAWildlife and Amy Robbins from The Rangers of Tangkahan for allowing me to tag along and try to raise awareness for the cause, the rangers themselves who looked after me and taught me so much, and the guests from RAW who were truly amazing.

Check out @RAWildlife on Instagram to plan your next wildlife adventure and follow @therangersoftangkahan to see what they have been up to and to support the work they are doing in the buffer zone and surrounding communities.

All Images within “Sumatra: A Fragile Ecosystem – Part I” are by Jason Savage, 2017. All Rights Reserved.

Life Is A Journey, Not A Destination