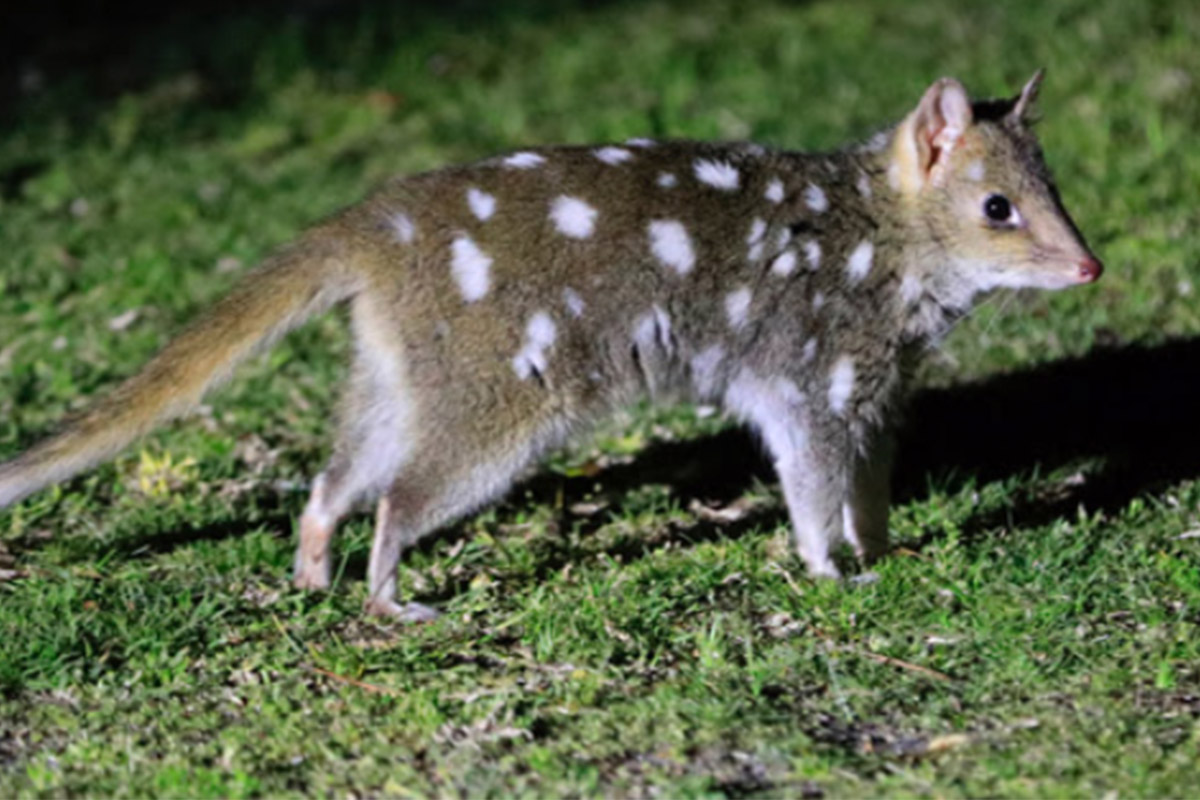 The reintroduction has been a remarkable success for the Eastern quoll. Image courtesy of Rewilding Australia.

Earlier this year, the exciting news from Rewilding Australia was that some of the eastern quolls released in February and March were pregnant. Recently, that news got a whole lot more real.

Eastern quolls born in the wild at Booderee National Park have been photographed roaming independently from their mothers for the first time. The team has kept a close eye on the offspring of three female eastern quolls that successfully bred in the park.

These quolls are nearing independence from their mothers and have been observed climbing trees, hunting for spiders and insects and exploring their environment together. Juvenile eastern quolls are beginning to explore the area independently of their mothers. Image courtesy of Rewilding Australia.

What does the team involved say?

“We have a long way to go before we can say we have re-established a wild population of eastern quolls in the park, but this pilot project has achieved some important milestones towards that goal and helped us see what’s possible with a small group of animals.”

These quolls were once common along south eastern mainland of Australia in the first half of the 20th century but today the wild population is restricted to Tasmania. Or at least, it was.

For the past eight months, the Eastern Quoll Reintroduction Team has collected and analysed data on the 20 quolls released into the park to find the main obstacles to successfully re-establishing a wild population at Booderee.

“We’re pleased with the results and it’s fantastic to see the joeys,” Rewilding Australia’s Rob Brewster said. “The team continues to monitor the eastern quoll population in the park, and is learning more about the behaviour of these quolls in the wild.”

Australian National University researcher Natasha Robinson said the project has contributed significantly to our knowledge of what is required to reintroduce quolls into the wild on the mainland.

“Seeing joeys leave the pouch is another positive step for the project,” she said. “We’ve now seen that the quolls reintroduced to the park can not only find food and shelter, but also breed and raise their young successfully.” What do these recent photos tell us?

WWF-Australia Head of Living Ecosystems Darren Grover said the photographs of healthy young quolls, born in the wild, are a real boost.

“It’s something not witnessed on the Australian mainland for a very long time. What a magical sight. They’re back where they belong,” he said.

The eastern quoll is what is known as a ‘critical weight range’ species, lying in the 35g-5.5kg range of mammal weights, which are particularly susceptible to fox predation.

Learn more about the eastern quoll and this reintroduction project over on our dedicated Quoll News page.

The ongoing success of this project is dependent on the continued support of the public. If you would like to donate, please follow this link.